Chief Cabinet Secretary Yoshihide Suga warned that if media reports about the statues, named "Everlasting Atonement," erected at a private botanical garden in Pyeongchang, in the country's northeast, are true, it would "decisively impact" ties between the countries. 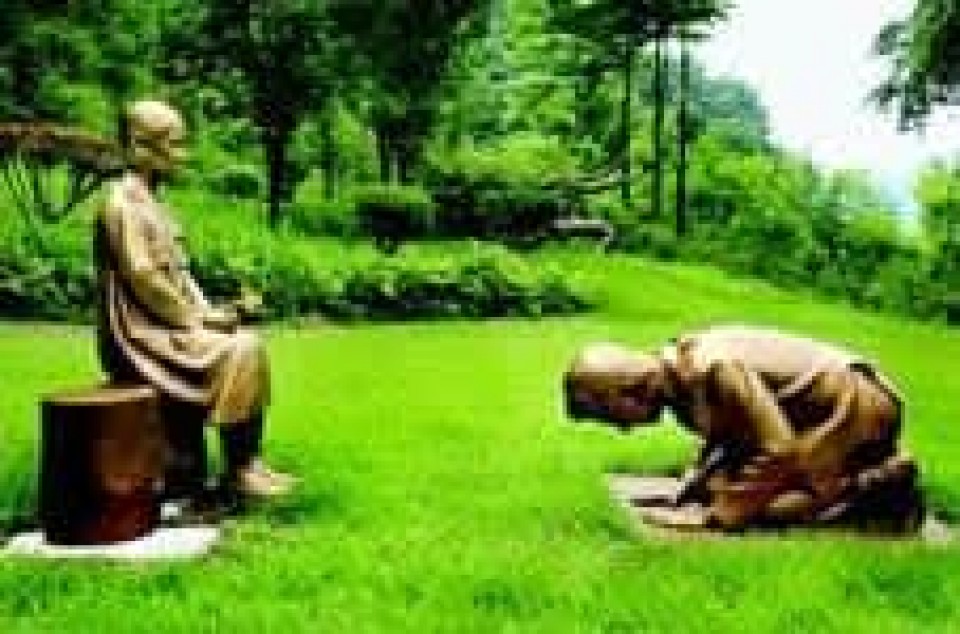 "While we have yet to confirm this, it would be unacceptable under international courtesy," he told a press conference.

In Seoul, a South Korean Foreign Ministry spokesman withheld his support for the statue's installation, saying that there is a type of "international comity" that should be followed regarding foreign leaders.

While he was asked if such comity needs to be taken into account over a statue installed on the grounds of a privately run botanical garden, Kim In Chul told reporters merely that reports about the statue must first be checked.

"I have no more explanation to add for now," he added.

The term comfort women is a euphemism for women, many Korean, who were forced to work in Japanese military brothels during World War II. The issue remains a source of much tension between the neighbors which are also embroiled in spats over trade controls and compensation for wartime labor.

Suga urged South Korea on Tuesday to honor a 2015 bilateral agreement to "finally and irreversibly" resolve the comfort women issue by requiring Japan to provide funding for an organization that provided financial support to impacted women.

However, the administration of South Korean President Moon Jae In dissolved the Reconciliation and Healing Foundation last year amid criticism that the agreement, struck under a previous government, failed to reflect the opinions of survivors.

The head of the Korea Botanic Garden has said the statues are not meant to represent Abe specifically and denies it is meant to serve any political purpose.

But South Korean media have quoted the local sculptor who made the statues as saying they are designed to show "forgiving is possible only if Japan continues to ask for atonement until South Korea accepts it."

Opinions among South Koreans on social media have been divided, with some seeing it as a piece of art that aptly represents the issue, while others have criticized it as offensive to the sitting leader of a neighboring country.

Many similar statues of a life-size girl seated wearing a traditional Korean outfit have been installed in South Korea, including in front of the Japanese Embassy in Seoul. Some have also been erected overseas, such as in the United States.