Two male doctors were arrested Thursday on suspicion of assisting in the death of a 51-year-old woman suffering from Lou Gehrig's disease by giving her a lethal dose of a drug.

Yoshikazu Okubo, who operates a clinic in Natori, Miyagi Prefecture, and Naoki Yamamoto, a doctor in Tokyo, allegedly administered a sedative to Yuri Hayashi at her home in the western Japan city of Kyoto last November with her consent, police said.

Hayashi, who had the progressive neurological disease also known as amyotrophic lateral sclerosis since 2011, is believed to have wanted to die.

"I don't know why I have to live with such a body," she wrote on her blog, using a device that enabled her to write with her personal computer by detecting the movement of her eyes while she lived alone with help of caretakers for 24 hours a day, investigative sources said. Hayashi's ALS had progressed and she could hardly move her body.

It was not immediately clear what the administered drug was. Euthanasia has been legalized in countries such as the Netherlands but is not legally recognized in Japan.

Okubo, the 42-year old former official at the Ministry of Health, Labor and Welfare, graduated from Hirosaki University in Aomori Prefecture. Okubo and Yamamoto, 43, were not her attending physicians and are suspected of helping her die for money, the sources said.

Hayashi transferred over 1 million yen ($9,300) to Yamamoto's bank account, according to the sources. There were signs she had contacted Okubo via social networking services to request euthanasia.

ALS is a progressive neurodegenerative disease that causes gradual paralysis with no fundamental treatments established. Approximately 10,000 people are affected by the disease in Japan.

On the day of the incident, the woman had told her caretaker that "acquaintances are coming," and invited the two doctors into her home.

They left about five to 10 minutes later, and the caretaker found Hayashi unconscious soon after. She was transported to a hospital where she died.

On an anonymous blog believed to belong to Okubo, the doctor had repeatedly written about his support for euthanasia. He introduced himself as a "rural general practitioner" who "dedicated" the website to "those who want to live a 'rich' and 'short' life."

"I believe people who suffer from chronic neurological diseases, among other ailments, who think 'living itself is a pain' should be able to find release through certain means such as an injection or drugs," he wrote in May last year, around six months prior to Hayashi's death.

Meanwhile, lawmaker Yasuhiko Funago, an ALS patient and member of the political party Reiwa Shinsengumi, said in a statement, "The most important thing is to create a society that protects the 'right to live' over the 'right to die.'" 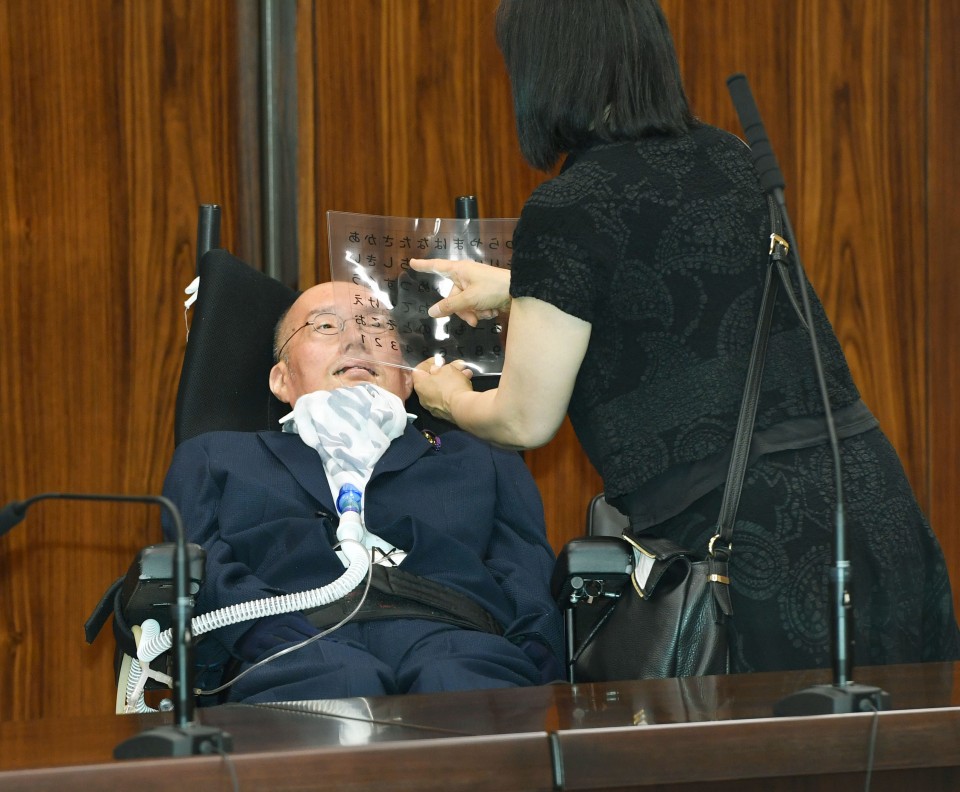 Japanese upper house member Yasuhiko Funago, an amyotrophic lateral sclerosis sufferer, attends a session of the House of Councillors Committee on Education, Culture and Science in Tokyo on Aug. 5, 2019. (Kyodo)