Los Angeles Angels' two-way player Shohei Ohtani hit his first home run of the season on Wednesday night, a three-run blast that briefly put the Angels ahead in a 10-7 loss to the Seattle Mariners.

The Japanese designated hitter, batting cleanup for the Angels at their empty home stadium, golfed a low 0-2 curveball from Seattle starter Justin Dunn clear over the right field wall in the fourth inning to give Los Angeles a 3-1 lead. 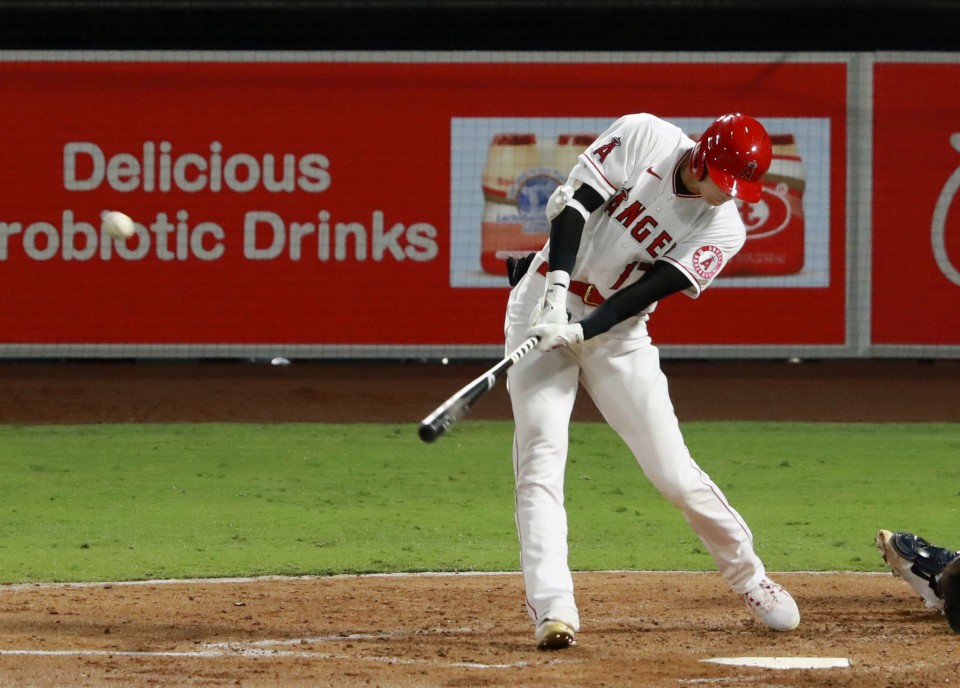 Shohei Ohtani hits his first home run of the season with two runners on base in the fourth inning of a game against the Seattle Mariners on July 29, 2020, in Anaheim, California. (Kyodo)

"I was aware I might see that kind of pitch. The main thing is I wasn't fixated on one thing," he said. "I'm not one of those who think it's a good idea to swing at pitches out of the zone. Ideally, I want to pass on those and put good swings on fat pitches."

Although Ohtani said his batting form is improving rapidly, he rued swinging and missing Dunn's second pitch, also a curve.

"That second pitch was the best one I saw (to hit). If I can put a good swing on that one, then I'll be doing even better."

The game went back and forth until the seventh when, with the Angels up 7-6, Los Angeles reliever Jacob Barnes (0-1) loaded the bases on a single and two walks and the Mariners scored twice on the way to evening the three-game series.

A day earlier, Ohtani registered his first RBI of the season when he doubled in a run in the Angels' 10-2 win over Seattle. He is now 3-for-19 with four RBIs this year.

Ohtani returned to his dual role as pitcher and designated hitter for the Angels this season after undergoing surgery on his throwing elbow in October 2018.

The 26-year-old made the fastest exit of his career in a 6-4 loss to the Oakland Athletics on Sunday, surrendering five runs without recording a single out in his first start on the mound since September 2018.

In other games, Toronto Blue Jays rookie Shun Yamaguchi (0-2) gave up four runs, three earned, in extra innings and was tagged with his second loss as Toronto fell 4-0 to the Washington Nationals.