More torrential rain struck Japan's southwestern region of Kyushu on Monday, causing flooding and mudslides in areas other than Kumamoto Prefecture, where at least 49 people have been confirmed dead, with rescuers racing against the clock to save others still missing following the weekend's deluge.

The weather agency issued its highest-level heavy rain warning for parts of Fukuoka, Nagasaki and Saga prefectures, urging people to take all possible measures to protect their lives. More than 1.22 million people in the Kyushu region have been asked to evacuate.

The agency said residents in the three prefectures should remain on high alert through Tuesday morning. As of 8 p.m., about 954,000 people from some 440,000 households were advised to evacuate, according to a Kyodo News survey based on information provided by local authorities.

Also, about 205,000 residents in Kumamoto, as well as a total of 67,000 others in Oita, Miyazaki and Kagoshima prefectures, were instructed to seek refuge.

Of the 49 fatalities in flood-ravaged Kumamoto, 14 were from the Senjuen nursing home near the Kuma River, which overran its banks at 11 locations and broke one levee, according to the prefectural government.

Eleven people remain missing and one person was feared dead, it added. About 6,100 homes along the river were submerged, and roughly 1,060 hectares of land were estimated to have been flooded, the infrastructure ministry said, adding that 11 bridges had been destroyed.

A number of communities were cut off due to severed roads, among other damage, with more than 80 schools closed in Kumamoto Prefecture. 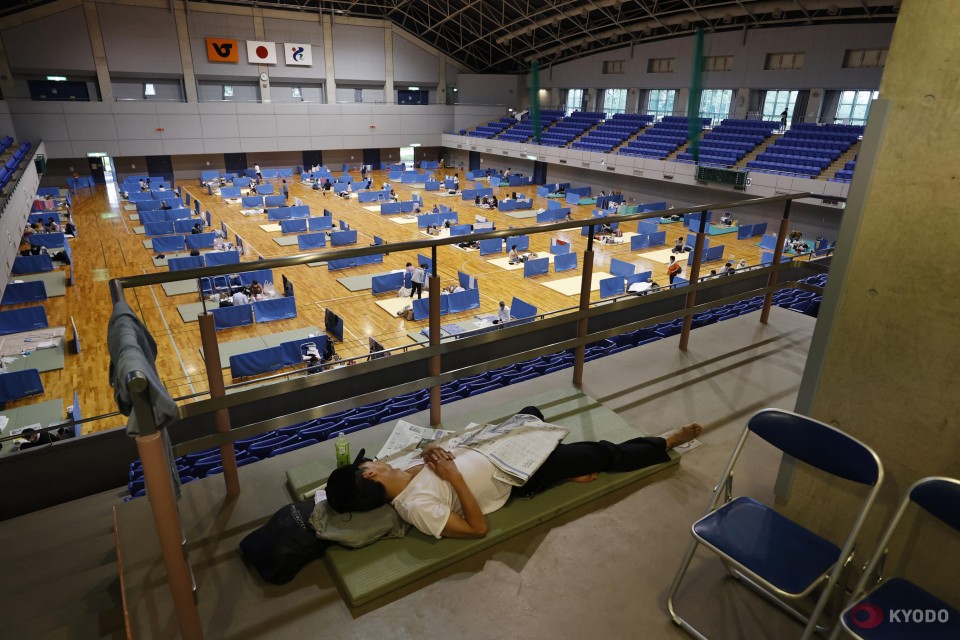 People rest at a temporary evacuation center in the flood-ravaged city of Hitoyoshi in Kumamoto Prefecture, southwestern Japan, on July 6, 2020, after deadly torrential rain. (Kyodo)

Kyushu Electric Power Co. said about 4,000 homes in the prefecture continued to be without electricity as of Monday afternoon.

Some 1,500 people had taken shelter at 86 evacuation centers across the prefecture as of Sunday afternoon as the downpour caused mudslides and floods, severing roads and leaving many houses without water or power.

"The water level of rivers suddenly rose in the Saturday rain. I am worried because I don't know how the rain is today," said Shoko Matsunaga, 49, who has been staying at an evacuation center in Ashikita since Sunday evening with her 2-year-old grandchild.

Given the risk of the novel coronavirus spreading, the evacuation centers have taken precautionary measures to avoid crowding and close contact of people in confined spaces, while readying sanitizers and checking the temperatures of people seeking shelter.

"It is important not to let people bring in the novel coronavirus," said Yatsushiro city official Hideki Motomura, 48, who is working at an evacuation center in Yatsushiro, serving more than 100 people. 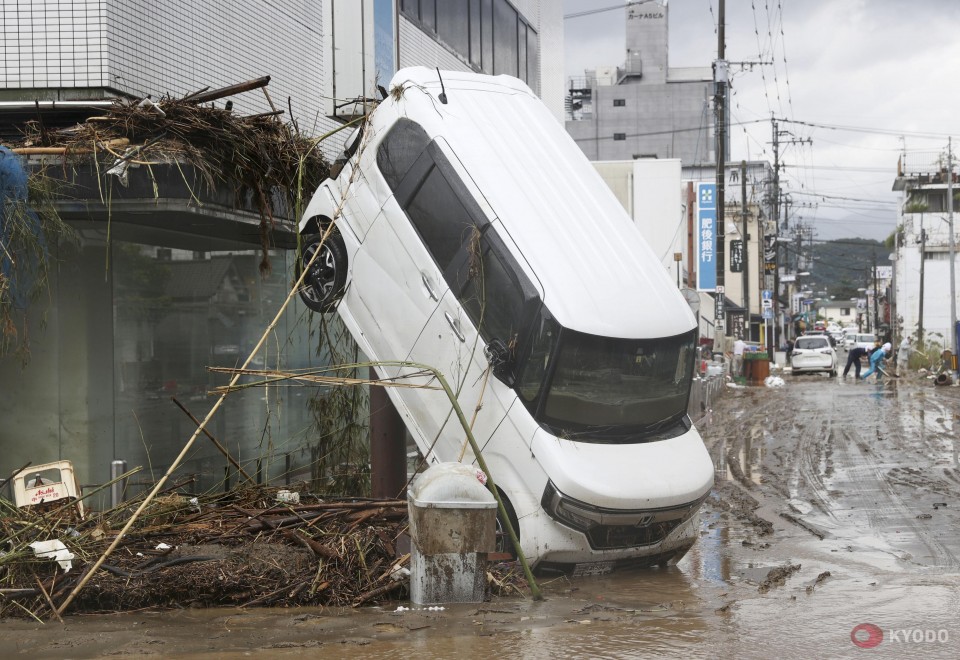 A local fire department said 69 people had turned up at its headquarters located on higher ground, but officials asked some to move to other evacuation centers to avoid crowding.

"We had capacity for 60 evacuees here in the past. But considering social distancing, 30 is appropriate at this time, so we had to ask some evacuees to move to another shelter," said Toshihiko Nakamura, an official of the fire department.

Some evacuees have opted to stay inside their vehicles for fear of becoming infected with the virus, so they have been told to register with an evacuation center and handed leaflets on how to avoid economy class syndrome, in which people develop blood clots from staying in the same position for a long time.

Some 100 evacuation centers opened in the city of Kagoshima, where rooms are periodically ventilated and people are asked to maintain social distancing.

The city said the number of people at each center was relatively small as it had notified residents since June to check the safety of their homes and consider evacuating to the homes of relatives or friends in times of disasters to reduce the risk of infection at shelters.