Keiko Shinozaki became the first female director of the Nagasaki Atomic Bomb Museum in April and immediately upon taking up the role saw the facility closed to the public as the coronavirus pandemic swept Japan.

The unexpected shutdown meant the museum's plans for 2020, the 75th anniversary of the bombing that devastated both Nagasaki in southwest Japan and Hiroshima in the west, were thrown into disarray. 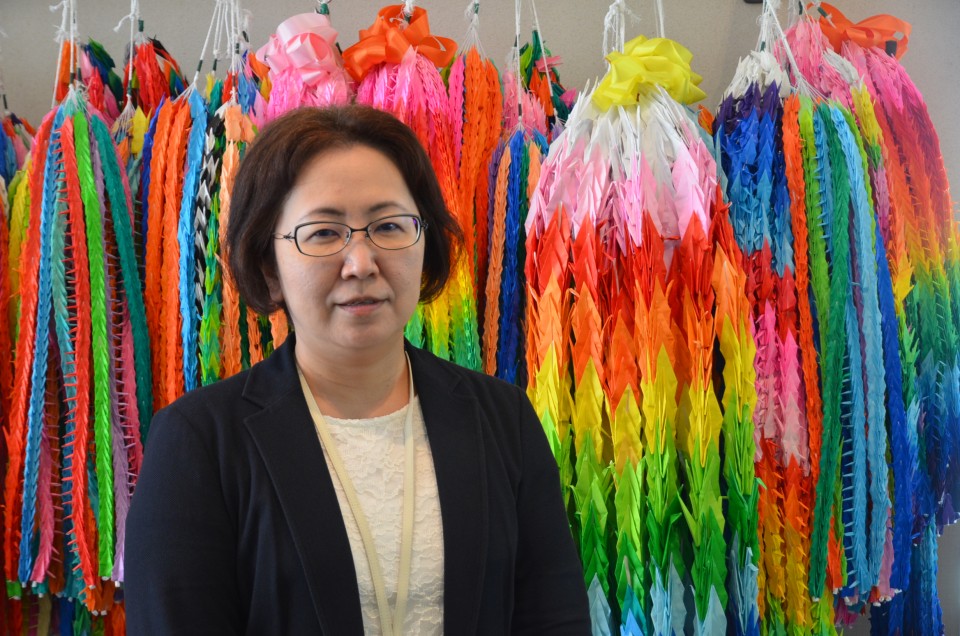 Keiko Shinozaki, the director of the Nagasaki Atomic Bomb Museum, poses for a photo in front of paper cranes displayed at the museum in Nagasaki, southwestern Japan, on July 1, 2020. (Kyodo)

While the museum unlocked its doors in June after roughly two months, Shinozaki thinks it is unlikely that the situation will return to how it was, pre-pandemic.

"Since this year is the 75th anniversary, we wanted to attract more visitors compared to other years," Shinozaki, 52, said in a recent interview.

With the Tokyo Olympics and Paralympics scheduled in the Japanese capital this summer and a United Nations conference on nuclear disarmament slated to begin in April, she thought there was an opportunity to enlighten a worldwide audience about Nagasaki's war history and of nuclear issues, generally.

And the city of Nagasaki was equally determined to make the most of the chance.

It had scheduled a joint exhibit in Tokyo this summer with Hiroshima, the city that was attacked three days before Nagasaki by U.S. forces intent that an overwhelming show of force would finally knock the Nazi Germany-aligned Empire of Japan out of World War II.

Given that the Olympics were scheduled to end this year on Aug. 9, the anniversary of the bombing, Nagasaki had hoped a message of peace would be included at the closing ceremony, she said.

But the outbreak of the virus changed almost every aspect of life in Japan and abroad. The Summer Games were postponed in March and the review conference on the Non-Proliferation Treaty in New York was also pushed back one year.

"We had hoped that these events, which are huge subjects of conversation, will allow more and more people from Japan and abroad to become interested in the topic (of the atomic bomb)," said the Nagasaki-native Shinozaki. "It's disappointing that the opportunities were lost." 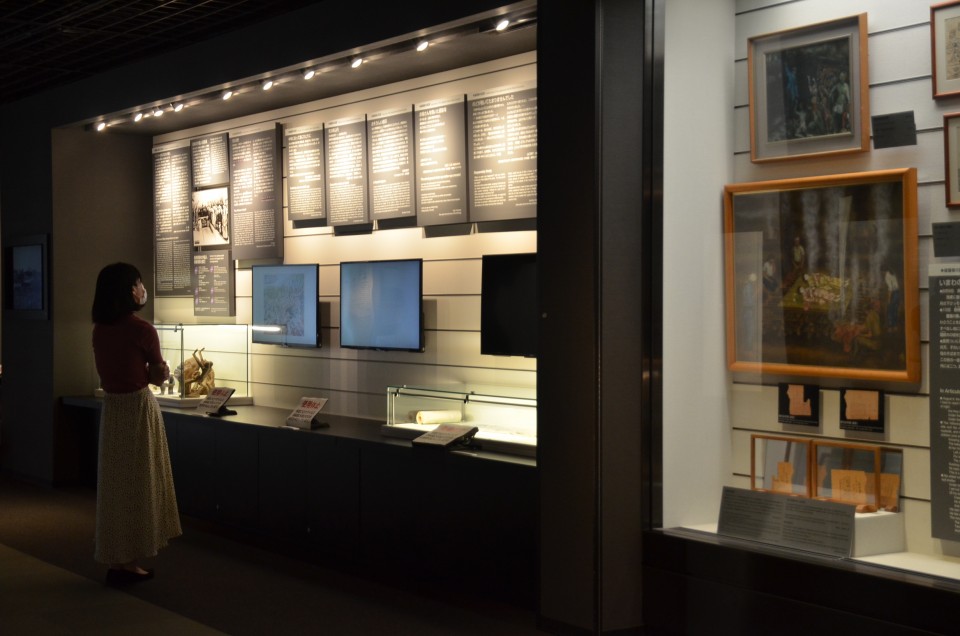 A visitor looks at exhibits at the Nagasaki Atomic Bomb Museum in Nagasaki on July 1, 2020. (Kyodo)

Nagasaki will go ahead with the annual memorial ceremony on Aug. 9, but mayor Tomihisa Taue has said only about 500 people, which is roughly a tenth of those present on any normal year, will be allowed to attend. The city also had scrapped plans to invite high school students from its sister cities abroad.

Since opening in April 1996 near the bomb's hypocenter, the city-run museum has been one of the most prominent facilities in Japan promoting a message of world peace.

It displays photographs and objects that show the devastation caused by the plutonium-core bomb known as "Fat Man," which killed an estimated 74,000 people by the end of 1945, as well as informing about the current situation in and status of the world's nuclear-armed states.

Prior to the virus outbreak and Japan's state of emergency declaration between April and May, the museum had been crowded daily with international visitors, locals and students from across Japan visiting on school trips. In June last year, it drew over a thousand people a day, with some days topping 2,000.

Shinozaki, however, recalls seeing an almost empty gallery after the museum reopened on June 1. The museum implemented social distancing measures, but still only about 30 people showed up on weekdays soon after its doors reopened.

"People used to be packed in to view the exhibits. If I'm asked if that situation can return, I'd have to say it is difficult (to see)," she said.

Shinozaki said school trips, which often include visits to the museum and audiences with atomic bomb survivors, were hit the hardest. She said the Nagasaki Foundation for the Promotion for Peace, which organizes talks by survivors, received 103 cancellations and 188 requests for postponement from schools by mid-June.

"Schools nowadays teach extensively about the bombing before bringing students to Nagasaki," she said. "I know that many survivors are also very upset, because they face a sense of urgency that they may not be able to share their stories (if this situation remains) due to their age and health."

Shinozaki, who does not have any family members who were caught up in the bombing, has been working at the city government since 1988 but it was not until two years ago that she took a role related to the attack. 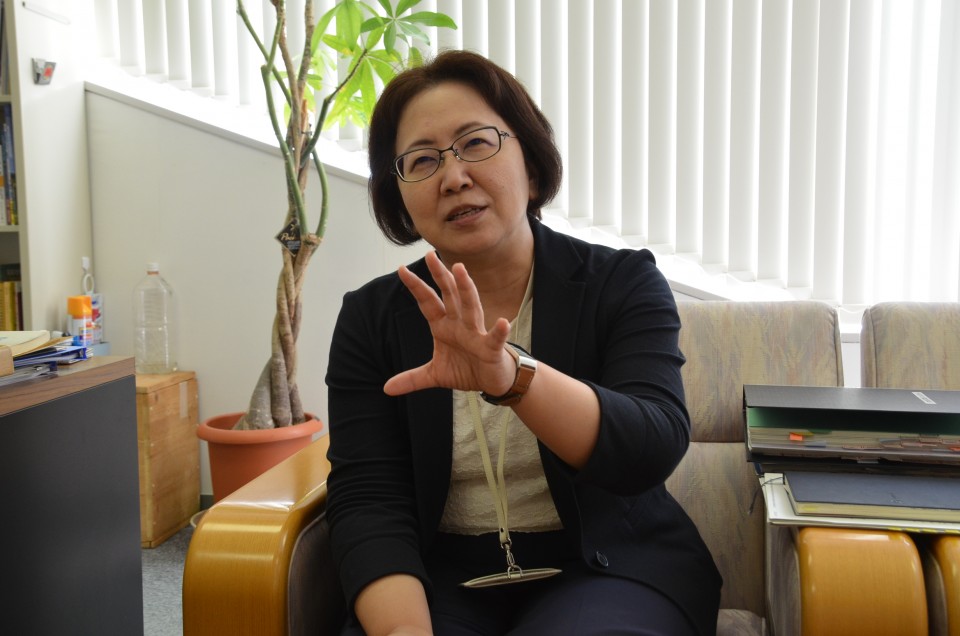 Keiko Shinozaki gives an interview at the museum in Nagasaki, southwestern Japan, on July 1, 2020. (Kyodo)

Managing the division responsible for supporting survivors, she saw firsthand that they are rapidly dying off as time passes. She thought there was "not much time left" for the survivors to share their experiences with people who did not go through the pain.

While the coronavirus casts a doubt on the museum's efforts, Shinozaki said there are lessons learned. The shutdown prompted her to think of ways to communicate more effectively, especially to younger generations.

"I didn't want the 75th anniversary to pass by without being able to do anything because of the virus. I thought about what we can do now," she said.

The museum put together bits and pieces of online references, including a virtual tour of the museum created by a local peace group. In June, the city hosted a videoconference to ask students to brainstorm the best ways for it to be able to pass down the history.

"In a way, coronavirus pandemic has forced us to realize the importance of our life and notice that our actions can make a difference," she said. "This is the same with the threat of nuclear weapons. We need to continue to share the message that even our tiny effort can lead to peace." 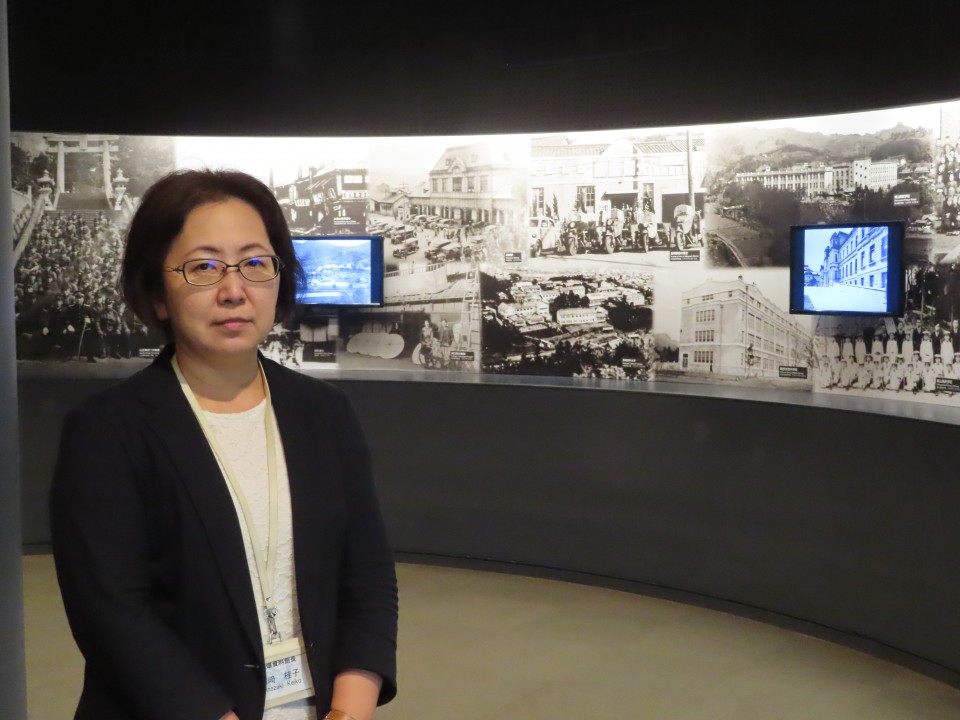