Alpine plants have come under threat of extinction from the sudden expansion of a species of dwarf bamboo in mountainous regions of Japan.

Due to the effects of global warming, the snow melts faster and the soil is drying up in these regions where the dwarf bamboo species Sasa kurilensis is replacing perennial alpine plants at an alarming rate, experts say.

Some mountainous areas are part of national parks with limited road access, making the cutting down of the bamboo grass both a labor- and cost-intensive exercise, causing a headache for local governments and the Environment Ministry. 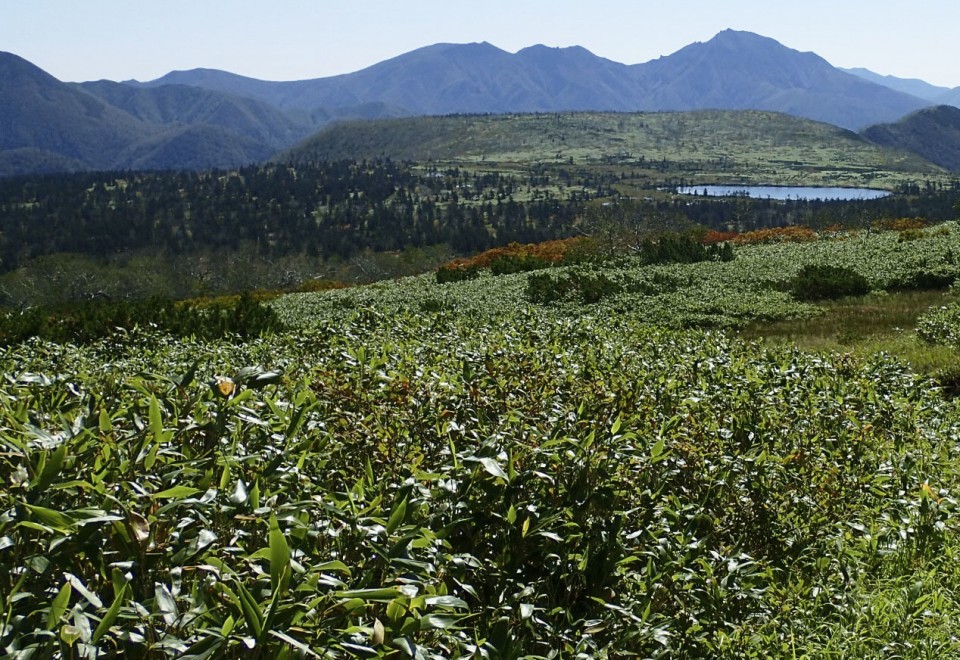 (Dwarf bamboo species Sasa kurilensis breeding at Daisetsuzan National Park in Hokkaido in September, 2018)[Photo courtesy of the Ministry of the Environment)

Gaku Kudo, 58, an associate professor of ecology at Hokkaido University in northern Japan, said the bamboo that grows in Daisetsuzan National Park in Hokkaido, for example, is a threat to flowers such as Anemone narcissiflora and Trollius riederianus.

"Such plants are being threatened with extinction," he said.

A study using aerial photography conducted by Kudo's research team found that Sasa had expanded its presence in the park by 31 percent in areas 1,400 meters above sea level or higher in the 40 years from 1977 to 2017. In 2017, Sasa covered about 11 percent of the areas.

In the past 30 to 40 years, the average temperature has risen at a rate of about 0.4 degree per decade, and the snow thaw has started about four days earlier per decade.

The relatively tall bamboo grass blocks the sun's rays and interferes with the photosynthesis of other plants. It also absorbs a large amount of water, drying the soil and preventing alpine plants that prefer a humid environment from living in wetland areas.

Kudo said the rising temperatures have also caused the alpine plants to flower earlier, disrupting the balance with the insects that pollinate them and adding to the pressure the plants are under.

The Environment Ministry, which oversees the management of national parks, has yet to get a handle on the situation.

"This is really a large-scale problem that we don't have any answers for now," said a ministry official.

According to recent research, the same problem has been confirmed on Mt. Hakusan (2,702 meters), which straddles the border of Ishikawa and Gifu prefectures, and Mt. Hiragatake (2,141 meters), which is shared by Niigata and Gunma prefectures.

Also, a survey by the Botanic Gardens of Toyama of five Sasa plant communities in Murododaira on Mt. Tateyama (3,015 meters) in the Northern Alps showed that the bamboo grass had more than doubled in area from 1,760 square meters in 1977 to 3,600 sq meters in 2015.

In Hokkaido, on Rebun Island, local authorities have mainly undertaken the responsibility for cutting down Sasa to protect various species of plant life since 2016.

However, part of the island is designated as a national park, making the job hard. Large-scale reaping would require paying a contractor and machinery would have to be carried by hand to places that could not be accessed by vehicle, a Rebun town official said.

Kazuomi Takahashi, 52, assistant manager of the gardens, who has conducted surveys on Sasa mainly in the Chubu region of central Japan, said, "Sasa is not an alien species, and it is not necessary to exterminate all of it. But there are many rare species of it, and one way is to select areas sensitive to changes in the environment and focus on treating them. Long-term monitoring is important."