Lee, who had been in a coma since Feb. 17, for some time, was pronounced dead at 7:24 p.m. at Taipei Veterans General Hospital, the hospital said, giving the cause of death as multiple organ failure.

The hospital said Lee developed pneumonia and heart failure after choking on milk on Feb. 8, and his lungs and kidneys were also seriously damaged.

Often called the "father of Taiwan's democracy, "Lee ruled from 1988 to 2000 and played a key role in transforming Taiwan from an authoritarian state with a history of bloody repression to a pluralistic society marked by free speech and democratic accountability. 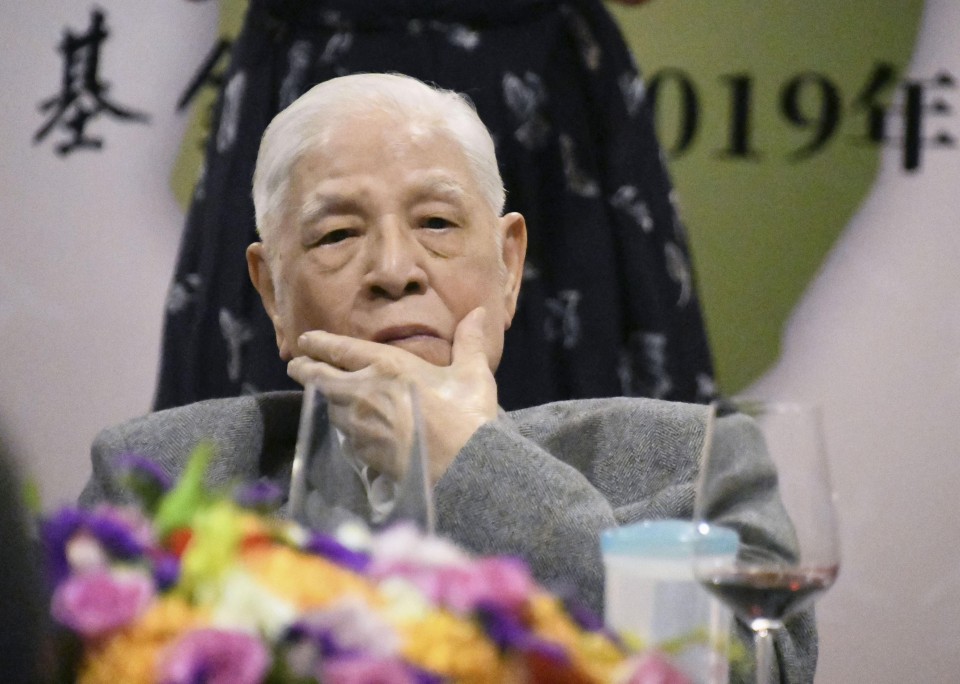 He oversaw its rise as the leading East Asian "tiger economy." Other notable achievements include land reform, adoption of a pragmatic foreign policy and expansion of higher education.

Throughout his time in power, Lee proved a steadfast and courageous champion of Taiwan's right to self-determination.

But China, which considers Taiwan a renegade province awaiting unification, saw him as a pro-independence figure. In 1999, Lee angered Beijing when he redefined cross-strait ties as a "special state-to-state relationship."

Lee was a native-born Taiwanese, an important distinction in an island ruled by the Nationalist Party (KMT) for 50 years after it relocated there after losing the Chinese civil war in 1949, bringing over 2 million followers from mainland China.

Born in 1923 as the son of a successful tea farmer and a longtime KMT member in northern Taiwan, Lee grew up under Japanese rule in Taiwan, which started in 1895 and lasted to 1945, and he was known for his affinity for Japan.

When World War II broke out, he was studying agricultural economics at Kyoto Imperial University, now known as Kyoto University.

Returning to his home after the war, he continued his education at National Taiwan University and went on to receive a master's degree from Iowa State University and a doctoral degree in agricultural economics from Cornell University.

Lee's work on rural reconstruction brought him to the attention of the KMT leadership. He joined the party in 1971 and was made a Cabinet minister without portfolio responsible for agriculture. He went on to become Taipei mayor and a provincial governor.

During this time of great success politically, Lee experienced a setback in his personal life in 1982 when his only son, Hsian-wen, died from cancer at 32. Lee would later recall the devastation, saying his Christian faith helped him cope with the loss.

In 1984, Lee was handpicked by then-President Chiang Ching-kuo, son of the late dictator Chiang Kai-shek, as his deputy, a position that groomed him to become president, which he did when the younger Chiang died in 1988.

Being the first native Taiwanese to hold the island's highest office was not easy, the first few years in particular when Lee was caught up in political infighting with the old guard loyal to the Chiang family.

Every morning before he went to work, Lee said he would tell himself to be fearless.

His perseverance paid off. When his predecessor's unfinished six-year term expired in 1990, Lee was elected handily by the National Assembly, whose task was to elect the head of state.

A student movement for political reform gave Lee a strong base to push for reforms in his first full term as president. Among other things, he persuaded the nondemocratic legislature to disband in favor of an elected one.

In 1996, Lee led Taiwan into its first free, open and peaceful presidential election.

During his third term, from 1996 to 2000, Lee continued to institute reforms.

In 1999, he raised eyebrows when he redefined relations with mainland China as "special state-to-state," angering Beijing, which retaliated with political and military intimidation.

Lee was not swayed.

Nor were Taiwanese voters, who elected the pro-independence Democratic Progressive Party's Chen Shui-bian in the 2000 presidential election.

Lee, who had declined to seek another term, helped facilitate a peaceful transition of power, ending the 50-year one-party rule of the KMT.

Accused of sabotaging his own party by setting up the split in the presidential election, Lee was expelled by the KMT in 2001.

After he retired, Lee continued to work hard in promoting freedom and democracy.

Since stepping down from the presidency, Lee visited Japan nine times, his last being in 2018 when he traveled to Okinawa where he paid tribute to Taiwanese killed in the 1945 battle on the island.

Lee is survived by his wife, Tseng Wen-hui, and two daughters, Anna and Annie, as well as grandchildren and great-grandchildren.