President Donald Trump's plan to involve more countries in an upcoming Group of Seven summit has sent ripples through U.S. allies including Japan, with some foreign policy experts warning that the move could result in a fractured political forum.

Trump has recently broached the idea of inviting countries including Australia, India, Russia and South Korea to the summit in the United States, while announcing a postponement of the gathering until at least September instead of in June as previously scheduled. 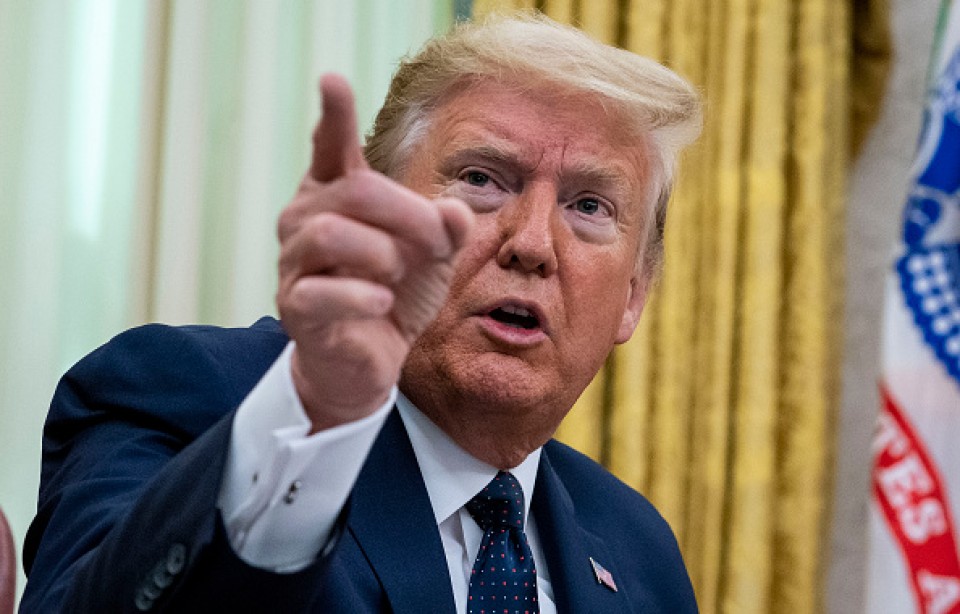 U.S. President Donald Trump speaks in the Oval Office before signing an executive order related to regulating social media on May 28, 2020, in Washington. (Getty/Kyodo)

"President Trump has claimed that the G-7 is outdated. I think the reality is there are two objectives: to bring in Russia, and to strengthen the international community's anti-China posture," said Mintaro Oba, a former U.S. diplomat and an expert on U.S. foreign policy in Asia.

But Trump's proposal has been shunned particularly over his call to readmit Russia to the G-7, which currently brings together the United States, Britain, Canada, France, Germany, Italy and Japan, as well as the European Union.

Russia had been part of the bloc from the 1990s -- then known as the Group of Eight -- until it dropped from the framework following international outcry over its annexation of Crimea from Ukraine in 2014. 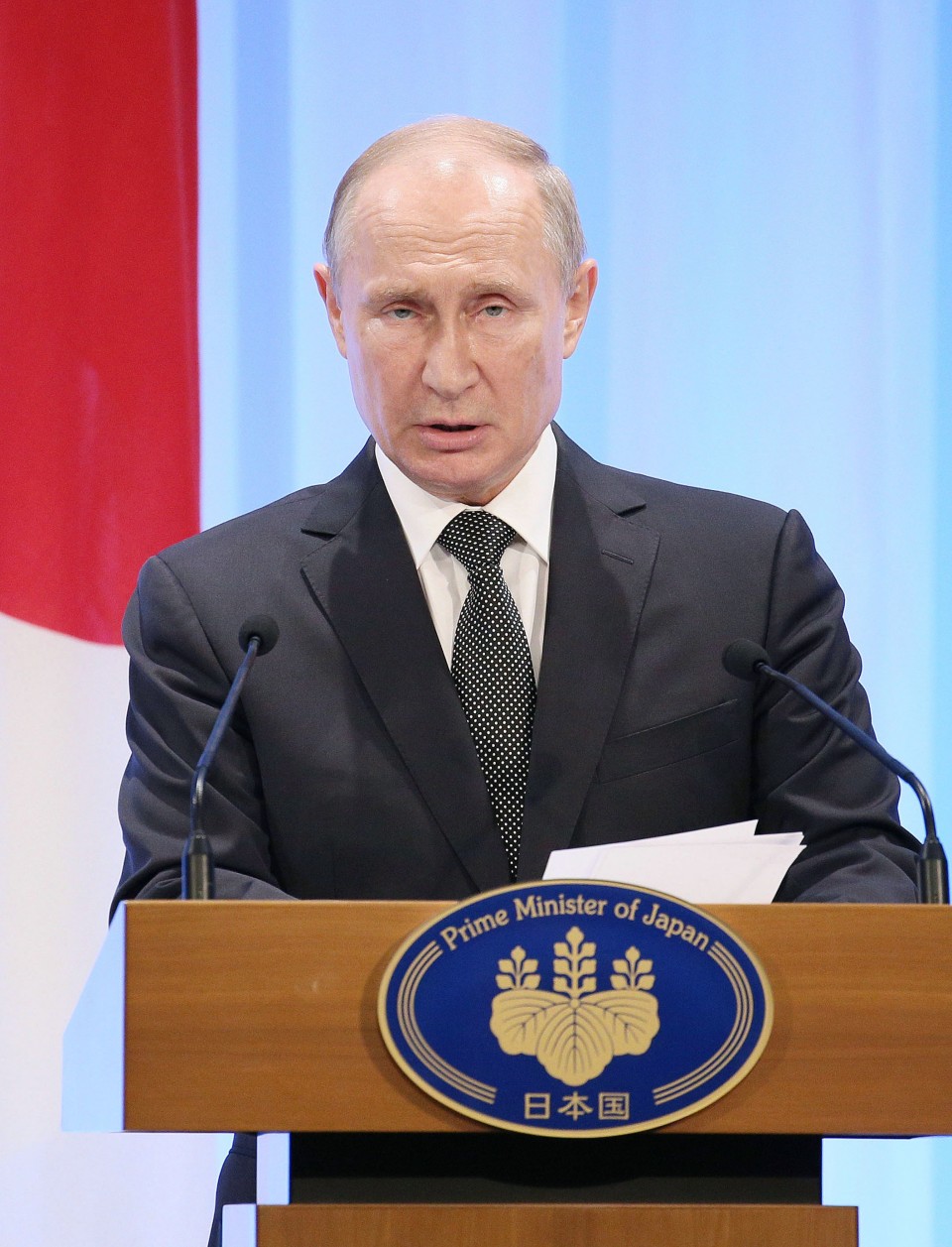 Russian President Vladimir Putin speaks at a joint press conference with Japanese Prime Minister Shinzo Abe in Osaka on June 29, 2019, following their talks on the sidelines of a Group of 20 summit. (Pool photo)(Kyodo)

Trump, who took office in 2017, has been vocal about his desire to allow Russia back in. Earlier this month, he argued in a radio interview that it is "common sense" to have Russian President Vladimir Putin in the talks.

"Half of the (G-7) meeting is devoted to Russia. And if he was there, it'd be much easier to solve," Trump said, adding, "It used to be the G-8. I don't say deserving or not deserving, I say common sense, get things done."

But Canadian Prime Minister Justin Trudeau, citing the annexation of Crimea, has argued that Moscow's "continued disrespect" of international rules and norms is why it remains outside of the G-7 and that the country will "continue to remain out."

EU foreign policy chief Josep Borrell has also opposed Russia's participation, emphasizing that cooperation among "like-minded partners" is all the more crucial in difficult times such as amid the coronavirus pandemic.

While acknowledging that it is up to the United States, which holds the rotating G-7 presidency, to decide which countries to invite as guests to the meeting, Borrell said changing the format on a permanent basis is "not a prerogative of the G-7 chair."

It has not been clear whether Trump is seeking an immediate permanent expansion of the G-7, but he has described the meeting with the invited countries as something like a "G-10" or "G-11."

According to a U.S. government official, Trump wants to discuss how to deal with China at the summit. The U.S. president, who faces an election in November in the midst of unprecedented challenges ranging from the pandemic to racial unrest, has stepped up his tough talk on China over Hong Kong and other issues, apparently hoping to build on anti-China sentiment prevailing among the public. 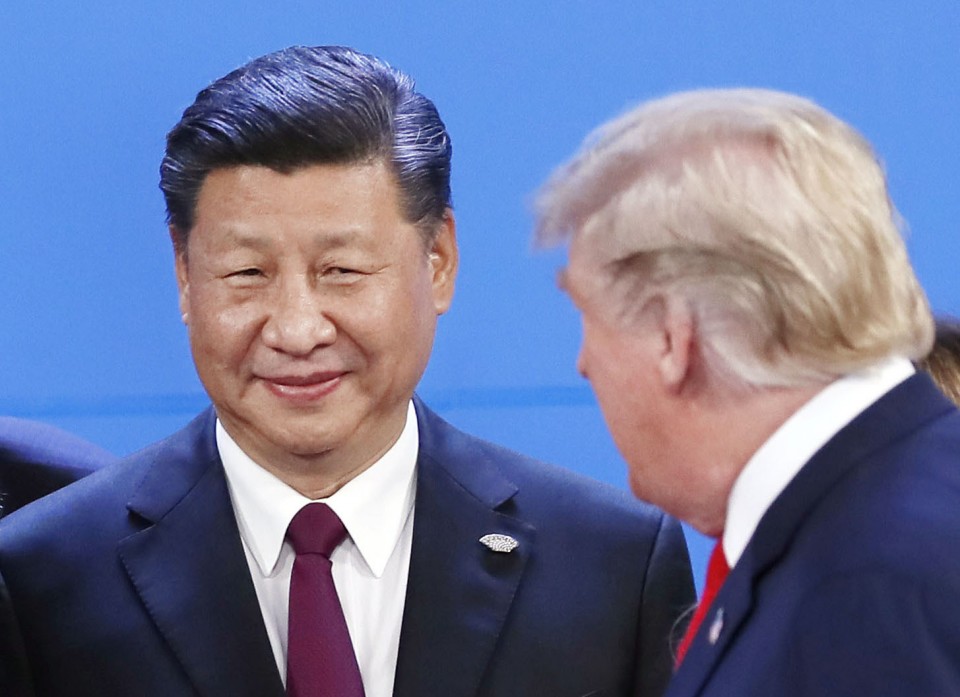 Chinese President Xi Jinping (facing camera) and his U.S. counterpart Donald Trump are pictured before a photo session at a Group of 20 summit in Buenos Aires on Nov. 30, 2018. (Kyodo)

But even the inclusion of three democratic countries -- Australia, India and South Korea -- may not guarantee coming up with a united front on China as Trump wishes.

Oba said South Korea will be "very concerned about how China will be framed during the expanded G-7" because it wants to "demonstrate that it is a close ally of the United States without antagonizing China," a country with which South Korea has strong economic ties.

"And, certainly, policymakers in Seoul must be concerned that it will be very, very difficult to do that in that setting," he added.

South Korea's participation, meanwhile, is a sensitive matter for Japan as well, which has enjoyed its status as the sole Asian member of the G-7 while being locked in disputes with Seoul over historical issues. 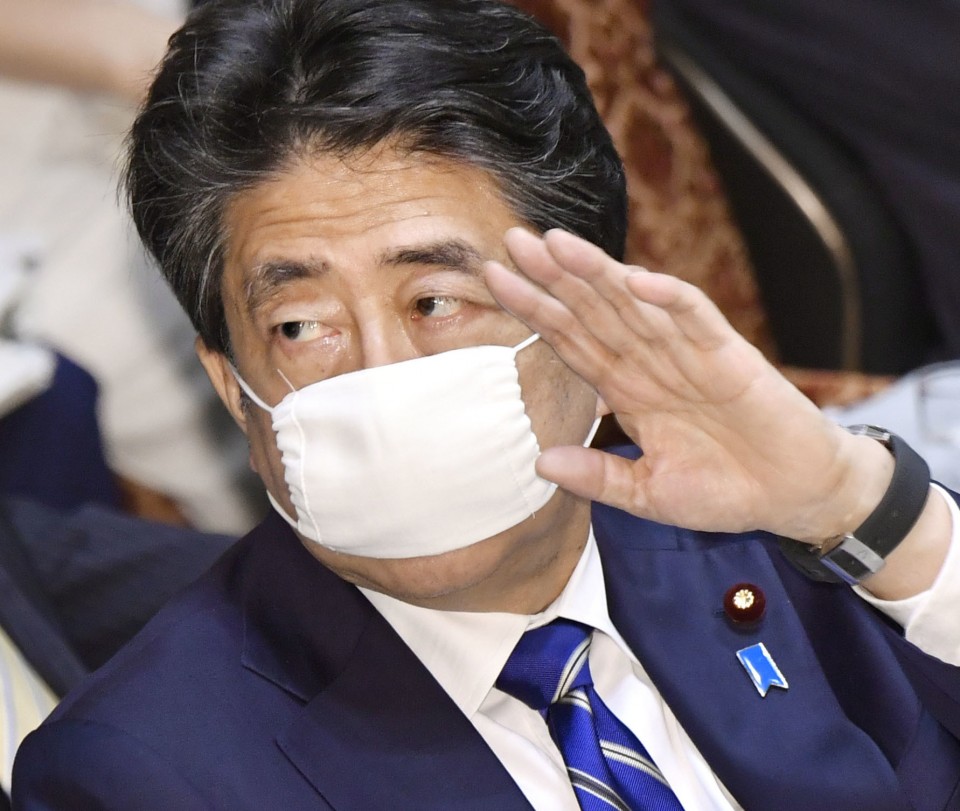 Japanese Prime Minister Shinzo Abe raises his hand during a House of Councillors Budget Committee session in Tokyo on June 11, 2020. The upper house took up the second supplementary budget for fiscal 2020, focusing on anti-coronavirus measures. (Kyodo)

With Trump frustrated that the G-7 does not represent the current global situation and the membership issue already proving to be highly contentious among other countries, a Japanese government source has expressed doubt as to whether the summit will take place this year at all.

"It is clear that he will only hold a meeting when it serves his purpose. If he doesn't feel any merit in doing so, the meeting is unlikely to take place," the source said, referring to Trump.

Trump has been vague on exactly when he plans to hold the G-7 summit. He has said "a good time" would be before the November presidential election, but also mentioned that the event could be held afterwards.

Trump, who has preferred a unilateral approach to foreign policy issues, has already vacillated over the staging of a G-7 summit. He previously canceled an in-person meeting altogether amid the outbreak of the novel coronavirus.

On May 20, he abruptly tweeted that he was considering rescheduling the summit around June to showcase his country's "transitioning back to greatness" from the health crisis. But the idea fizzled in less than two weeks after German Chancellor Angela Merkel reportedly rebuffed the invitation, and Trump announced on May 30 the summit's postponement and the expansion plan.

Oba warned that there is a risk that an expanded membership could lead to further disunity and inability to demonstrate coordination in the face of China's growing assertiveness in the Indo-Pacific region.

"The Group of 20 (which includes countries like China and Russia) is already the premier forum for broader international economic cooperation and the G-7 represents the most industrialized countries with similar global outlooks and similar values," Oba said.

"So there has to be a balance between reassessing how expanded membership could make it stronger and maintaining a membership that is more likely to be united and effective. And I'm not sure that the current idea of bringing in these four additional members will do that," he said.