The coronavirus pandemic is posing a serious challenge to the business models of low-cost airlines which have relied on high seat occupancy and aircraft operating rates.

As they restart more flights grounded since February, some are using their aircraft for cargo transportation and others are trying to balance infection prevention with profitability until social distancing rules can be safely eased and air traffic demand returns to normal.

But some aviation industry experts say that low-cost carriers will likely need to start devising new business strategies instead of just weathering the storm by hoping that demand will eventually come back to levels before the pandemic. 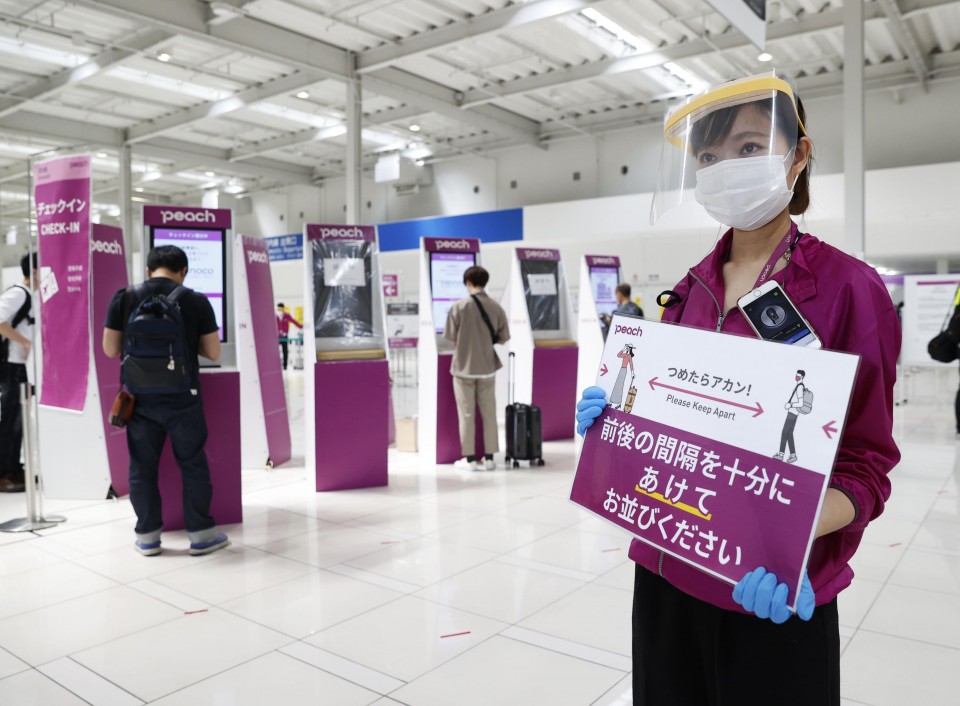 A Peach Aviation Ltd. employee asks passengers to keep social distancing at Kansai airport in Osaka Prefecture on June 5, 2020. The low cost carrier plans to resume operations of all of its 22 domestic flight routes by June 19 after many flights were canceled due to the outbreak of the new coronavirus. (Kyodo)

Peach Aviation Ltd., a group company of ANA Holdings Inc. which operates All Nippon Airways, plans to resume services on all of its domestic routes by June 19 after having drastically reduced flights, while Jetstar Japan Co., a budget carrier affiliated with Japan Airlines Co., is also restoring flights in stages following extensive cancellations.

The two carriers are both asking passengers to wear face masks and suspending all in-flight sales, but they are taking a slightly different approach to preventing virus infections among passengers.

Jetstar will not take reservations for middle seats, the same preventive measure taken by Japan Airlines, though its officials say the arrangement is "a temporary response" which will be impossible to sustain unless it gives up the low-cost business model and raises fares.

Peach Aviation is not taking special measures for customer spacing, saying its aircraft have sophisticated ventilation systems, though industry officials say it will still be hard to make profits with the current level of air travel demand.

Jetstar Japan and Peach Aviation do not currently face financial trouble as their parent firms Japan Airlines and ANA say they have enough funding to deal with the current crisis, but they still face a long road to full service resumption.

"The seat occupancy rate which low-cost carriers need to make a profit is considered to be between 70 and 80 percent," said Yasuhito Tsuchiya, a senior analyst at Mitsubishi UFJ Morgan Stanley Securities Co.

In June, the number of domestic flights Jetstar Japan plans to operate will be only 10 percent of the pre-pandemic level, while that of Peach Aviation will be just above 30 percent, according to the airlines. 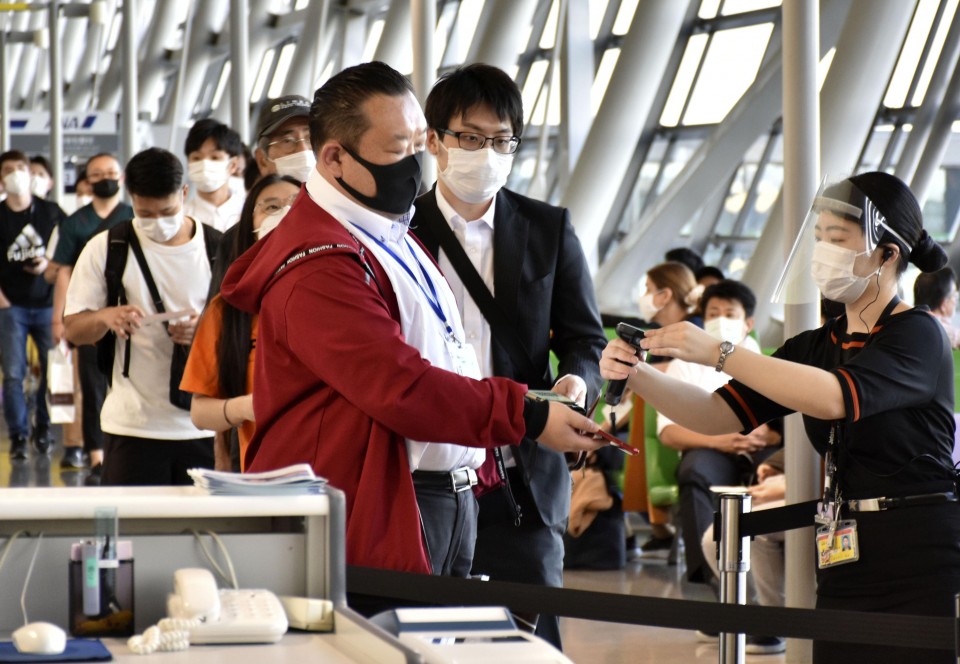 Passengers line up to board a Jetstar Japan plane at Kansai International Airport in Osaka, western Japan, on May 29, 2020. Low-cost carriers like Jetstar are struggling amid a massive reduction in travelers following the new coronavirus outbreak. (Kyodo)

Tsuchiya said that a possible path for budget airlines' survival is to more closely coordinate services with their parent companies by opening up routes not covered by the big carriers.

"They have to depart from the low-price-first strategy and offer more value to passengers, such as improved quality of services...though such a business shift is very tough in this situation," he added.

Earlier in the month, Zipair Tokyo Inc., a Japan Airline Co. wholly-owned budget carrier unit, launched its first flight using a B-787 jet, carrying cargo from Narita to Bangkok instead of passengers as initially planned.

"Low-cost airlines have to survive through measures including turning part of their services to cargo flights for a while," said Tomohiko Nakamura, a professor at Kobe International University versed in the aviation business.

"It will take a long time for demand (for passenger flights) to recover to levels before the pandemic. Low-cost flights could well become a thing of the past."