The stock of large Pacific bluefin tuna, a popular fish for sushi but for which concerns remain over its depletion, has been projected to meet an international recovery target of around 40,000 tons by 2024, sources familiar with the matter said Sunday.

The projection was made by the International Scientific Committee for Tuna and Tuna-like Species in the North Pacific Ocean, which earlier this year assessed the probability of achieving the target as 100 percent, according to the sources. 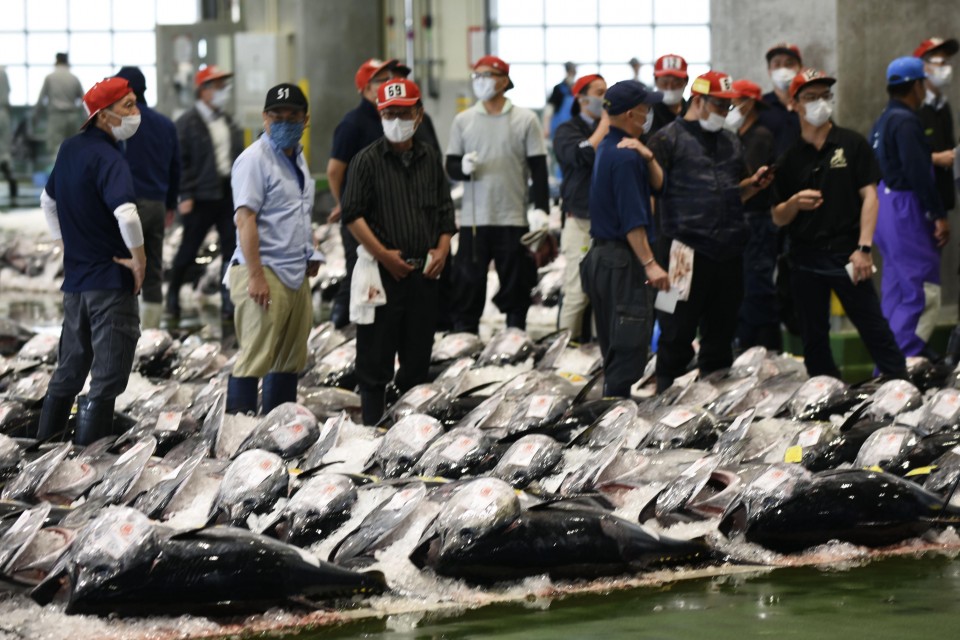 Bluefin tuna are lined up for an auction in Sakaiminato, Tottori Prefecture, western Japan, on June 5, 2020, following the season's first catch of the fish. (Kyodo)

It could set the stage for quota expansion discussions, proposed by Japan, at an international conference usually held in summer.

Japan has been seeking an expansion of catch quota at meetings of the Northern Committee of the Western and Central Pacific Fisheries Commission.

At last year's meeting, parties including the United States opposed the proposed quota expansion, saying the stock of the tuna has not recovered enough.

After the restrictions were introduced, Japan once exceeded its annual quota in a fishing season through June 2017, drawing criticism from some countries keen on environment protection.

Japan's Fisheries Agency has tightened controls by coming up with penalties for fishermen who do not abide by the rules, which is believed to have contributed to the gradual recovery of the tuna stock.

Requested by the commission, the scientific committee conducts stock assessment on Pacific bluefin tuna every two years and the previous estimation said the probability for achieving the target in 2024 was 98 percent.

This year's meeting of the northern committee, members of which include Canada, China, South Korea, Taiwan and the United States, is scheduled to be held in late July in Fukuoka, southwestern Japan.

But it remains uncertain whether the meeting will proceed as scheduled due to the effects of the coronavirus pandemic, according to the agency.