Japan has been perplexed by Indonesia's abrupt policy shift on a high-speed railway project, now asking Tokyo to join in on the major infrastructure deal that it originally lost out to China.

"Normally, (Indonesia) should have talked to us first," a Japanese government official said, referring to Jakarta's new proposal to integrate the China-led project with a medium-speed railway plan involving Japanese assistance in what would amount to an extension of the high-speed project. 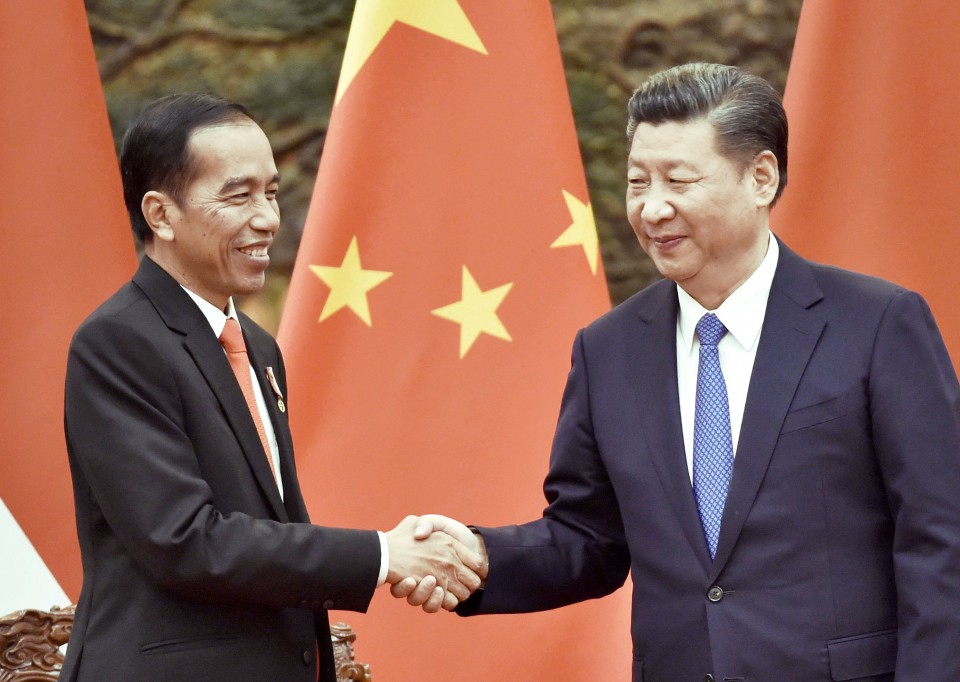 Chinese President Xi Jinping (R) and Indonesian President Joko Widodo shake hands at Beijing's Great Hall of the People on May 14, 2017. They met for talks on the sidelines of the Belt and Road Forum for International Cooperation and presided over a signing ceremony for loans by the China Development Bank to Indonesia's high-speed railway project. (Kyodo)

Work on the approximately 140-kilometer high-speed rail service linking Jakarta and Bandung, the capital of West Java Province, commenced in 2016 by an Indonesia-China consortium.

The project was initially scheduled to be completed in 2019, but it was delayed to 2021 due to issues with land expropriation, among other reasons.

After losing its bid against China to build the high-speed railway, Japan in September last year reached a deal with Indonesia on the outline of a separate railway project to cover the full 720 km distance between Jakarta and Surabaya, the capital of East Java Province and the second-largest Indonesia city.

Speaking at a news conference on May 29, Indonesian Coordinating Minister for the Economy, Airlangga Hartarto, revealed that President Joko "Jokowi" Widodo proposed extending the Jakarta-Bandung railway project to Surabaya to "be more economically viable," and bringing in a consortium of Japanese investors to join the Indonesia-China project.

Jokowi's remark about the proposed extension of the high-speed service was a complete surprise to Japan. Railway experts say it would be difficult to integrate the two projects in practical terms as the width of the tracks differs.

Hartarto also said completion of the high-speed railway project has been postponed for another year due to the coronavirus pandemic, which caused a "budget overrun."

Upon completion, the Jakarta-Surabaya medium-speed railway service will double the current speed of the existing train to 160 km per hour, cutting the travel time by around half to 5.5 hours.

The Indonesia-Japan consortium has begun a feasibility study of the project scheduled to be completed by the end of 2020.

"We will calmly proceed with the feasibility study for the project," said a person involved in the medium-speed rail project.