Beijing municipal authorities on Monday confirmed a fresh cluster of new coronavirus cases at the biggest wholesale market in the Chinese capital, with the central government instructing the city to take "decisive steps" to prevent further infections.

Beijing's health commission said the number of infections increased by 72 for two days through Sunday, adding it has tested thousands of citizens including those who went to hospital because of fever, while urging people who visited the Xinfadi market in the southwestern district of Fengtai after May 30 to be tested. 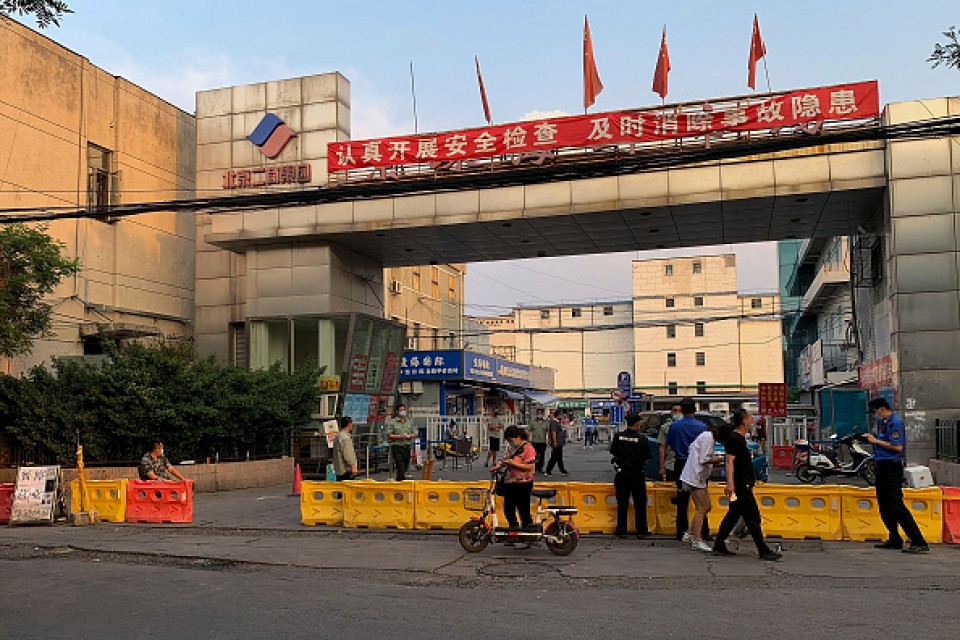 People wearing face masks to protect against the new coronavirus at Jingshen seafood market on June 13, 2020 in Beijing, China. Beijing discovery of seven cases of the new coronavirus in the two days, the market was closed for disinfection after it was found that a newly identified coronavirus patient had visited it. (Getty/Kyodo)

A city official told reporters that the risk is "very high" that infections will expand ahead. On Friday and Saturday, seven people related to the market were confirmed to be infected with the virus that causes respiratory disease COVID-19.

The latest outbreak comes after Beijing lowered its emergency response to the virus from the second level posture to the third level on June 6. Chinese Vice Premier Sun Chunlan asked the city to trace the source of infections in a strict manner.

In the capital, new infection cases had not detected about for the past two months. Beijing said Sunday that the entire district where the wholesale market is located has been placed in a "wartime emergency mode."

The local government has announced that it will carry out virus tests on approximately 200,000 people who visited the market after May 30. According to state-run media, around 46,000 citizens who live near the market will be undergo PCR tests.

China's health authorities reported 57 new coronavirus infections on the mainland on Saturday, topping 50 for the first time since April 13. On Sunday, the number rose by 49, which has brought the total to 83,181, with 4,634 deaths.