Kenki Fukuoka, who starred for Japan at last autumn's Rugby World Cup, said Sunday he won't compete in next year's postponed Tokyo Olympics in order to stay on course for a future in medicine.

In an online press conference, the 27-year-old announced his withdrawal from the national rugby sevens team in order to focus on studying to prepare for a medical school entrance exam.

Fukuoka still plans to compete next season in the Top League but the one-year Olympic postponement due to the novel coronavirus pandemic had made it too difficult to balance his studies with his commitments to sevens.

He had retired as an international from the 15-a-side game after last year's World Cup on home soil, where he scored four tries and was instrumental in Japan's historic run to the quarterfinals. He had said the 2020 Olympics would be his last time to represent Japan on the pitch. 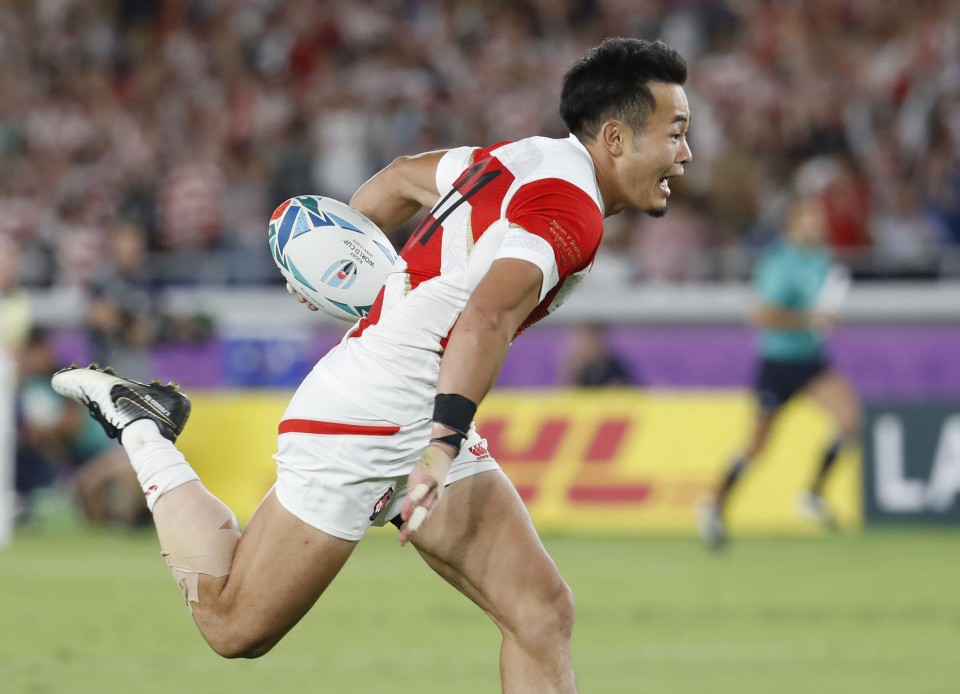 (Kenki Fukuoka of Japan runs with the ball on his way to scoring a try during the second half of a Rugby World Cup Pool A match against Scotland on Oct. 13, 2019, in Yokohama)

"I have been able to accept this kind of fate," he said. "My greatest desire is to live a life without regret. For me, I can see this decision as the cleanest way to do it."

"I can take the time I would spend at training camp and put it toward studying and preparing for my next career."

"I had been preparing (for the Tokyo Olympics) with a desire to win a medal. Although I feel some frustration, I have faith in the remaining members of the squad and I will cheer them on."

Although a gifted athlete, he had long had his eye on a future in medicine, but that the pandemic had made his desire more acute.

"Health care will always be needed, regardless of whatever changes take place in the world," he said. "Yet, I feel my desire to be needed in that capacity has only grown stronger."

If things go as he expects, the final phase of his rugby career will be in the Top League, where he currently plays for the Panasonic Wild Knights. The league, which canceled its 2019-2020 season in February after just six rounds, is looking into resuming next January.

"I want to prepare so I'll be able to deliver the best possible performance," Fukuoka said about the upcoming Top League season.