Alongside a busy inner-Sydney train line stands a second-hand cupboard stuffed with baked goods, canned food and toiletries, repurposed as a "give what you can, take what you need" community pantry.

Set up in late March by housemates Maureen Lee, Michelle Gomes and Joyce Akinpe, the Newtown Blessing Box was a spontaneous response to the increased joblessness and hardship the three women could see in their community as the coronavirus pandemic took its toll.

"We were watching problems coming in real-time," said Lee, 39, referring to the first few weeks of the pantry's operation. "If you wanted to know exactly who was falling through the gaps, just look who's using it."

Close to two of Sydney's largest universities, the suburb of Newtown is popular with students, members of the arts and entertainment industries, and hospitality workers -- some of the demographics hardest-hit by the economic slowdown caused by the pandemic.

The housemates say that while international students and working holiday visa holders -- two groups who are ineligible for federal government assistance -- are among the largest users of the pantry, they have also met families who have not been able to make mortgage repayments because both parents have lost their income. 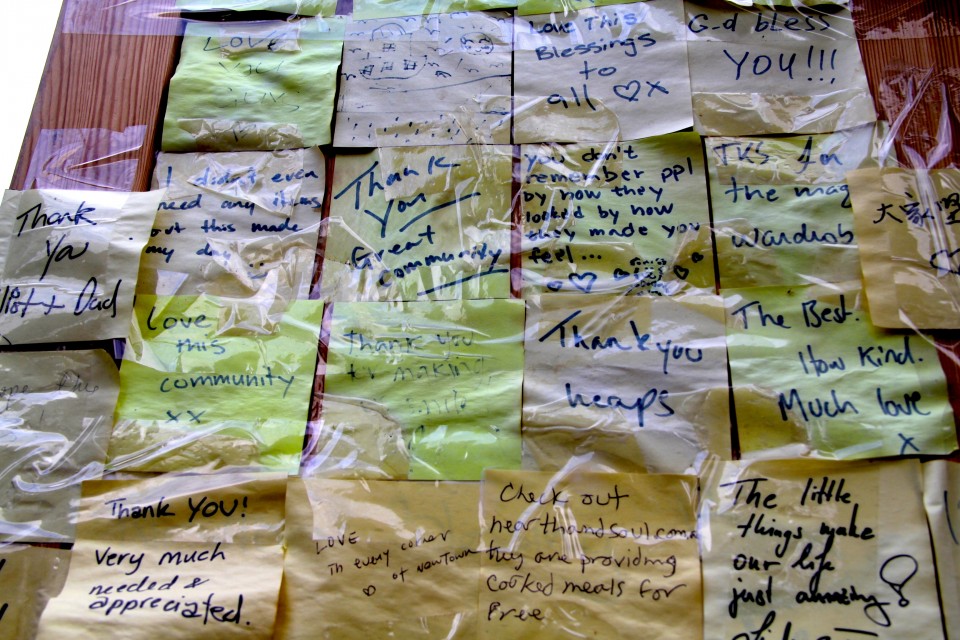 (Notes from the local community posted inside the Newtown Blessing Box community pantry in inner-Sydney, as pictured on May 24, 2020)

"When we stand here, you cannot tell who is giving and who is taking," said Lee.

While Australia has been successful in stemming the spread of the coronavirus and the impact of COVID-19, the respiratory illness caused by the virus, the economic fallout is forecast to be the worst seen in generations.

According to the Australian Bureau of Statistics, between March and April, almost 600,000 Australians lost their jobs -- the largest drop in employment on record. Temporary wage subsidies are expected to be paid to a further 3.5 million people which equates to more than one-quarter of the country's total labor force.

The pantry has been in operation for about two months, restocked about four or five times a day. Everyday foods such as long-life milk and bakery goods, as well as toiletries like nappies and sanitary pads, are among the most sought-after items.

Donors to the pantry include locals with groceries to spare, as well as nearby restaurants and cafes which have provided free meal or coffee vouchers.

However, the housemates say the strength of the Newtown Blessing Box lies in recipients of the pantry being able to return the favor and donate when they can.

Solal Ntsama, an international student who has lost his hospitality job because of virus-linked shutdowns, is one such member of the pantry's community. 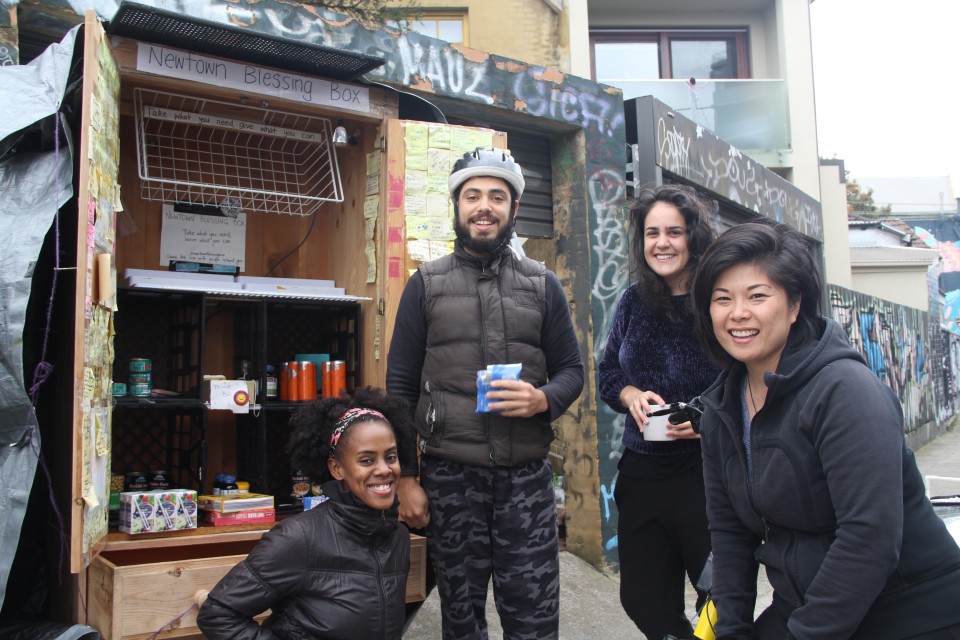 (From L) Joyce Akinpe, Solal Ntsama, Michelle Gomes and Maureen Lee stand in front of the Newtown Blessing Box community pantry in inner-Sydney on May 24, 2020)

"Usually, I take more than I give, but, you know, it's good to give back," said Ntsama, who made his donations of muesli bars and juice boxes in celebration of the Muslim holiday Eid al-Fitr.

The celebration, which marks the end of a month of fasting during Ramadan, encourages people to give to charity. Ntsama said he chose to give to the Newtown Blessing Box because "everybody who needs something can take some."

Lee said the ability for people to give back to the pantry removes the shame and stigma that can make it difficult for some people to seek help, particularly if they have never needed financial assistance before.

"If you go to a charity, it's a one-way system (of only receiving). And then you have this deficit, the deficit of guilt, the deficit of 'I am less than'...but with this, there is no deficit," she said.

"The concept is, essentially, it's a shared pantry. It's not a charity case. It's a different mentality." 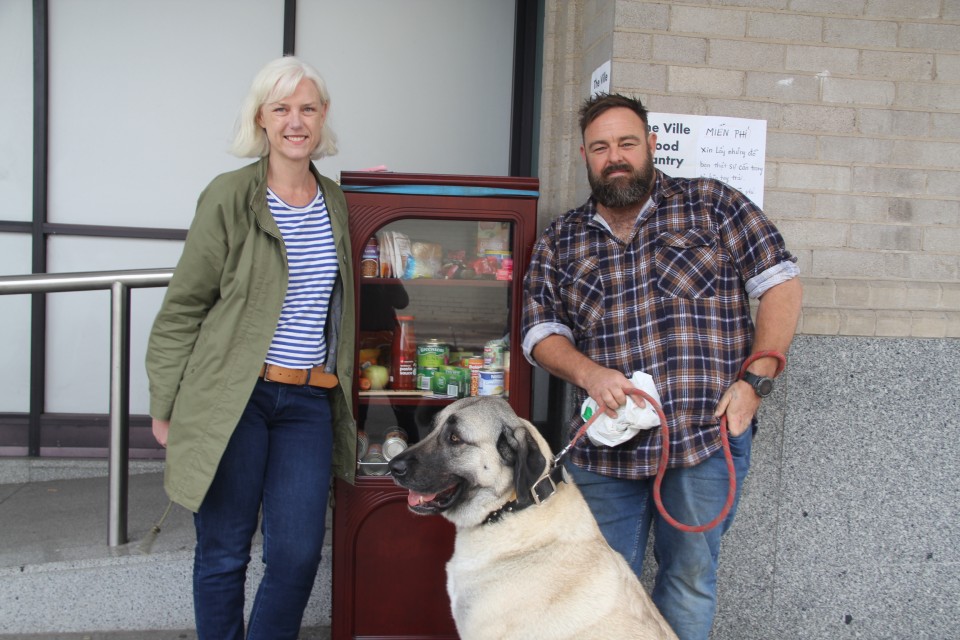 (Natalie Roberts and Daryl Byrne, founders of The ‘Ville Food Pantry in Marrickville, Sydney, are pictured on May 23, 2020)

The spirit of the pantry has also spread to other parts of Sydney with half a dozen other community groups starting their own food banks.

Nicole Roberts and her neighbor Daryl Byrne established The 'Ville Food Pantry in the nearby suburb of Marrickville not long after hearing about the Newtown Blessing Box.

"With people being shut in their own small space, it's a weird contradiction that people are thinking globally about how this (virus) is affecting everyone, but also bringing them back into their own local community and doing things and taking the time to appreciate the small things," said Roberts, 49.

To include as much of the community as possible, Roberts and Byrne have put up signage in Vietnamese and also have plans to post signs in Greek so members of the two of the largest migrant diasporas in the area can participate.

As the public health crisis subsides and more people begin to tackle the pandemic's economic challenges, Gomes, one of the women responsible for the Newtown pantry, said she hopes more people will start similar efforts in their communities, wherever they may be.

"Our vision would be if each suburb or a few suburbs have one, it takes the pressure off (the Newtown pantry) and it's more about building community," the 31-year-old said.