School restarts picking up in Japan amid lingering coronavirus fears

Many schools in Japan reopened Monday after being closed for an extended period due to the coronavirus pandemic, taking steps to reduce the risk of infections.

In Tokyo, students at Katsushika Elementary School were divided into three groups that arrived at different times to avoid crowding.

"I'm happy I can meet my friends again after what's been a while. I want to play a lot while avoiding bunching up as much as possible," said Kaito Fukuda, 8.

Mikan Yamada, 8, said, "I had been worried I might not be able to attend school ever again."

"I want to attend classes with others and play with them and eat with them," she added. 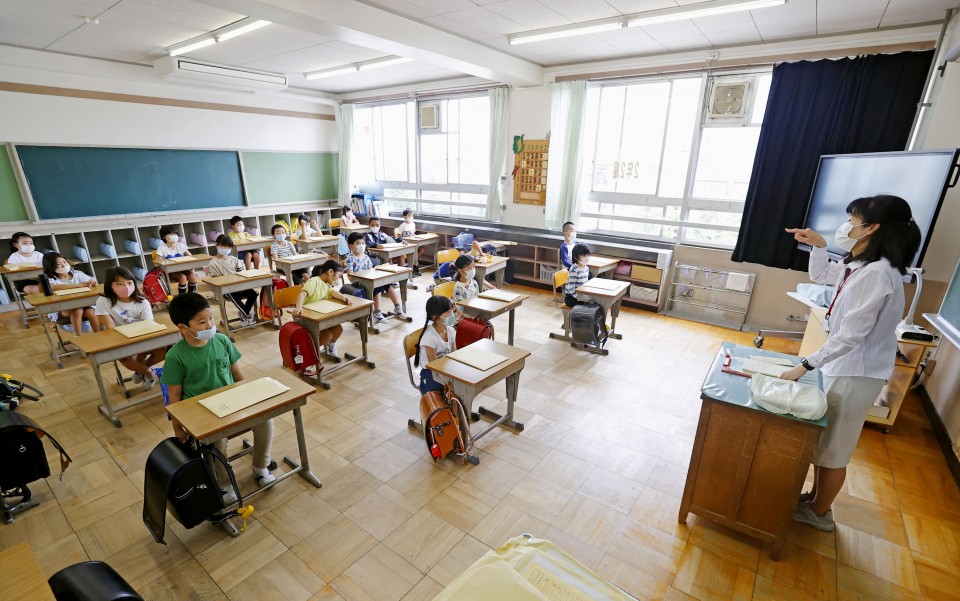 (Pupils sit apart from each other at a distance at a school in Tokyo on June 1, 2020, as classes resumed after a lengthy suspension due to the coronavirus outbreak)

The pace of school reopenings picked up after the Japanese government lifted the state of emergency for all Japan by May 25, but since then there have been reports of new infections in some parts of the country, including Kitakyushu, Fukuoka Prefecture.

The southwestern Japan city said on Sunday that five students at a city-run elementary school are infected with the virus.

In the nine days through Sunday, the city reported a total number of 97 infections, including the five students, after having logged no new cases between April 30 and May 22.

The education board of Kitakyushu has requested schools to ask parents to keep children at home when they or a family member has a fever.

One of the five students at the Moritsune Elementary School who was found to be infected had developed a mild fever, but this was not detected during a body temperature check at school. At the time, her mother also had a fever.

"We regret we were unable to stop (the infections) at an early stage," said a senior official of the board.

As the remaining four students displayed no symptoms, an education board official said there is a limit to what schools can do, although it will take measures to avoid similar cases.

At Meido Junior High School in Fukui Prefecture, which resumed classes after about three months, students wore face masks and used different entrances, and teachers checked the students' temperatures as they lined up while keeping their distance from one another.

"It is hard to avoid crowding or close contact with others at a school, but we must thoroughly implement the measures that need to be taken since we have a responsibility to look after children," said Hiroyuki Watanabe, a teacher at the school.