Japan certain to struggle in seeking alternative to Aegis Ashore

As Japan has scrapped a plan to deploy the land-based Aegis Ashore ballistic missile defense system, the country is expected to face difficulties finding an alternative means of protecting itself from the threat of North Korean missiles.

Defense Minister Taro Kono has indicated Japan will defend itself from the missile threat with the existing Aegis-equipped destroyers of the Maritime Self-Defense Force for the time being.

But making them focus on missile defense would mean they cannot be used for defense elsewhere, including the Nansei Islands chain covering Okinawa, around where China has recently been increasing maritime activities. 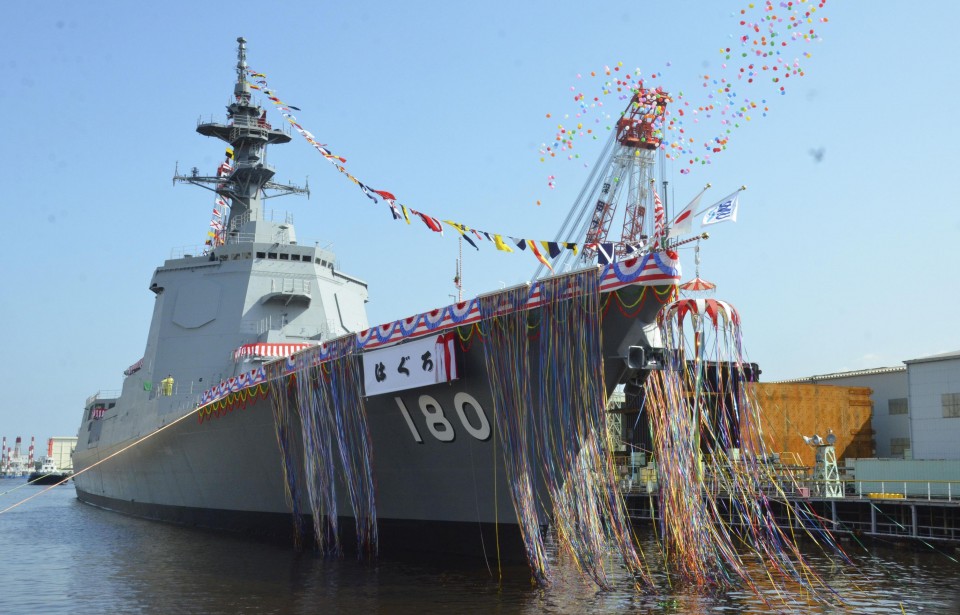 "Haguro, " the newest Aegis-equipped destroyer of Japan's Maritime Self-Defense Force is launched at a shipyard in Yokohama (Kyodo)

While the new Aegis-equipped destroyer Haguro will be added to the fleet next March, bringing the number of such vessels in Japan to eight, a defense ministry source said increasing them further requires the training of crew, which "cannot be achieved overnight."

U.S. forces use the advanced land-based Terminal High Altitude Area Defense system. But like the Aegis Ashore, it faces the problem of cost and limitations on where it can be deployed.

The Defense Ministry considered introducing THAAD in the past but decided against it due to its huge costs.

Some members of the ruling Liberal Democratic Party have proposed that Japan be able to attack foreign enemy bases. They believe interceptor missiles may be ineffective at a time when countries such as North Korea are enhancing their missile technology.

"We need to consider various ways of deterrence to stop missiles from coming," said Itsunori Onodera, chairman of the LDP's Research Commission on National Security, who was defense minister in 2017 when the government decided to deploy the Aegis Ashore system.

The Komeito party, the LDP's junior coalition partner, has expressed a negative view about the idea of adopting strike capability.

Komeito leader Natsuo Yamaguchi on Tuesday, told a press conference he hopes to "hold careful discussions" based on the government's long-held practice that has denied the ability to attack foreign enemy bases from the standpoint of the country's exclusively defense-oriented policy under the pacifist Constitution.