U.S. President Donald Trump's hardline response to the raging protests stemming from the death of black man in police custody in Minneapolis may open a window of opportunity for China to prevent Washington from getting involved in East Asian affairs.

Since his initial threat to deploy the military to quell what he calls "riots" drew stinging criticism, Trump has softened his rhetoric in recent few days. But fears linger that if he really sends troops, this would effectively give China a green light to resort to force in Hong Kong. 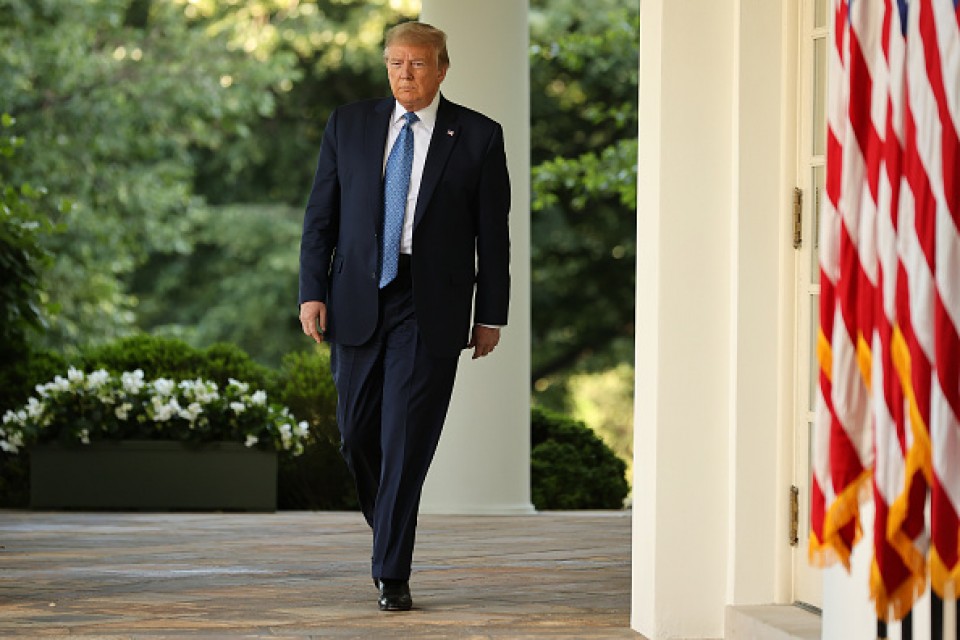 U.S. President Donald Trump walks out of the White House to make a statement to the press about restoring "law and order" on June 1, 2020 in Washington, DC. (Getty/Kyodo)

Given the Trump administration's apparent failures in responding to the new coronavirus and his rising disapproval rating, some diplomatic sources have become skeptical about whether he can be re-elected for a second term in the presidential election in November.

Trump's shifting of East Asia onto the back burner could bolster China's power in the region, allowing Beijing to ramp up pressure on Hong Kong and Taiwan, blurring the fate of the Korean Peninsula, and compelling Japan, a U.S. close ally, to reshape its diplomatic policy.

"If Trump takes military action to thwart ongoing protests, China would not hesitate to suppress protests in Hong Kong by force. If Trump loses the election, nobody would strongly deter China ahead," one of the sources said.

"The security environment in East Asia would become very uncertain and even dangerous. Trump should act decisively, while being fully aware that his moves have always influenced other countries," he added.

Across the United States, protests have erupted over the death of George Floyd, 46, at the hands of a white police officer in the midwestern state of Minnesota.

Curfews have been imposed and the National Guard, which responds to domestic incidents, has been activated in a large number of cities, including the U.S. capital, to repress the protests, many of which have turned violent with people looting and setting fire to buildings and vehicles.

In Washington, near the White House, police countered protesters by firing tear gas. Earlier this month, Trump pledged to deploy "thousands and thousands of heavily armed soldiers" if necessary to put down the violence, calling himself a "president of law and order."

His remarks came after China's parliament on May 28 passed a resolution to introduce a national security law to crack down on what Beijing views as subversive activity in Hong Kong, antagonizing pro-democracy protesters in the territory. 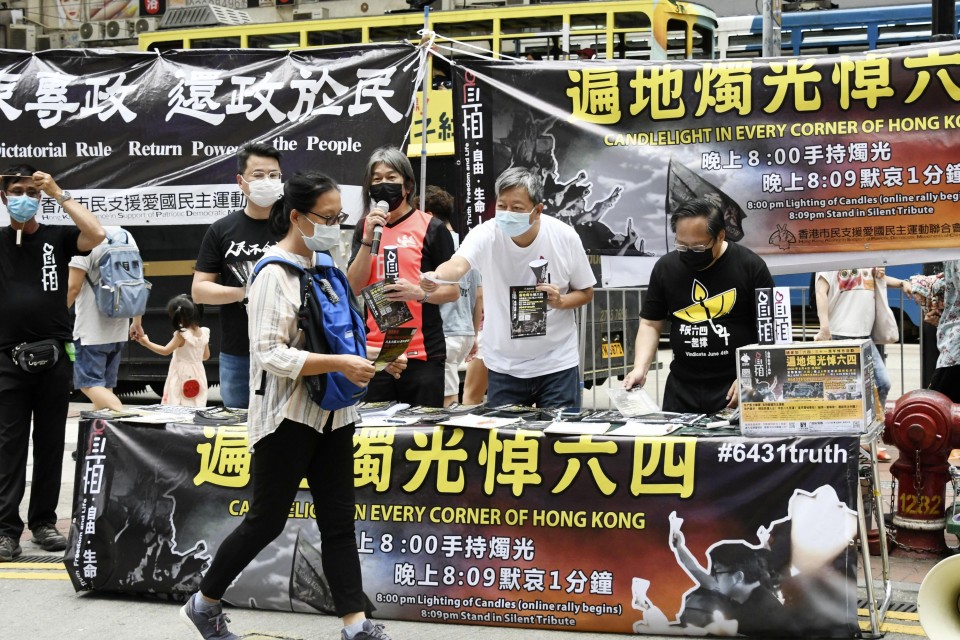 Pro-democracy group members protest in a commercial district in Hong Kong on May 31, 2020, following mainland China's recent decision to introduce a national security law in the territory. (Kyodo)

"Why does the U.S. refer to those (advocating) 'Hong Kong independence' and black-clad rioters as 'heroes' and 'fighters' but label its people protesting against racial discrimination as 'thugs'?" Chinese Foreign Ministry spokesman Zhao Lijian said.

"Why did the U.S. have so many problems with the restrained and civilized way of law enforcement by the Hong Kong police but have no problem at all with threatening to shoot at and mobilizing the National Guard against its domestic protesters?," he added.

The Global Times, a tabloid affiliated with the ruling Communist Party, said, "If U.S. politicians understood that if they encourage violence in another country, their words might backfire on them one day, they would probably 'think twice' before commenting again on the Hong Kong turmoil in the future."

Already tense Sino-U.S. relations have been deteriorating also over the origins of the new virus, first detected in the central Chinese city of Wuhan late last year, as Trump has accused Beijing of trying to initially cover up the outbreak.

China, however, has almost contained the virus that causes respiratory disease COVID-19, while the United States has become the world's worst-affected nation.

"At present, the situation in the United States is still very serious. People's lives are at stake," Zhao said. "We urge those in the U.S. who still want to label and politicize the virus to put their mind and energy into fighting the epidemics at home."

By providing an excuse for Beijing to evade responsibility for its apparent missteps in the early days of the coronavirus outbreak and to tighten its grip on Hong Kong, where massive protests against mainland China repeatedly took place last year, Trump has also come under fire both domestically and internationally.

"The president has offered polarizing tweets that further strain our country's social and political fabric, and has put forth proposals intended to chill speech instead of protect it," said Michael Abramowitz, president of the Washington-based Freedom House.

"Coupled with the human and economic impact of the COVID-19 pandemic, all of this makes for a profoundly unsettling time that calls for moral and political leadership to bring our country together," said the head of the nongovernmental watchdog on democracy.

Jeff Kingston, director of Asian Studies at Temple University Japan in Tokyo, said, "Domestic protests started in reaction to yet another police murder of a black man but have now morphed into a wider protest against the cry-baby in chief who is seen widely as a malignant buffoon."

When asked about sending the military to cities in a TV interview aired Wednesday, Trump said, "I don't think we'll have to," but added, "It depends," indicating he has not completely abandoned the move as an option.

Even if he avoids using the military to get the latest protests under control, "By throwing fuel on the fire and cheerleading repression Trump looks like a tin-pot despot," Kingston said.

A source familiar with East Asian affairs said, "Given his recent policy gaffes, Trump might not get re-elected. This would have major effects on security issues surrounding East Asia."

"With Trump's presence vanishing in the region, China may continue taking unreasonable steps to undermine human rights in Hong Kong, become keener to reunify Taiwan by force and attempt to deepen ties with nuclear-armed North Korea," he said.

"Japan has been getting along with the United States so far, but if Trump leaves the political arena, bilateral relations would change, while China would remain a very important trading partner for Japan," the source said.

"As Japan has to make every effort to rebuild its economy hit hard by the coronavirus pandemic, it cannot offend China. Japan would have to reconsider its diplomatic strategies toward the United States, China and the East Asia region," he added.

(Miya Tanaka in Washington contributed to this story.)