In a small western Japan village known for little more than its ancient burial mounds, an asparagus-loving Sri Lankan farmer has put her heart and soul into showing she belongs, despite sticking out like a green thumb.

Udara Kametani, 36, has grown a wide variety of vegetables in Asuka, Nara Prefecture, since she started out as the only foreign female farmer in her area about four years ago, but it is asparagus that has become her true passion.

"I fell in love with it," she said with a smile when asked to describe her relationship with the vegetable. 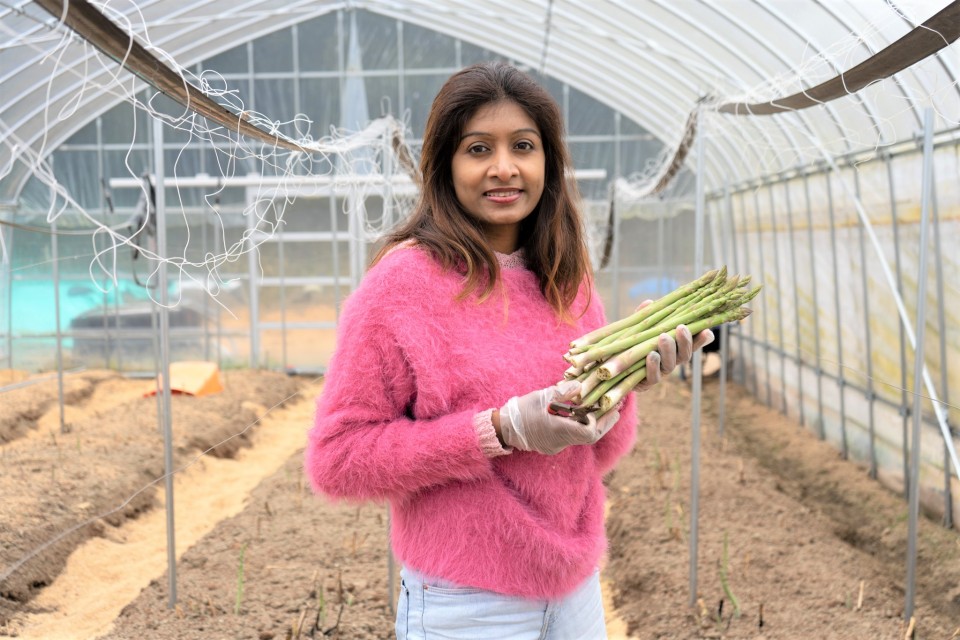 Udara Kametani from Sri Lanka developed a passion for asparagus after attending farming workshops in the prefecture four years ago. (Kyodo)

As her operation has grown, she has been able to provide fresh produce to around 50 stores in her area and neighboring prefectures.

"The key is not to think of how tiring or grueling it is, but to have fun," she said.

The village with a population of some 5,500 is known for its many ancient "kofun" mounded tombs, including the Kitora Tumulus, which features a mural from the seventh century with the world's oldest constellation chart.

But with little else going on, Asuka has seen its population decline as younger residents move to find opportunities on offer in Japan's large cities, said Udara's Japanese husband Akio Kametani, 49.

But Udara is committed to expanding her vegetable business in the region where she and her family have put down roots.

Udara's Japanese journey began through her television in Sri Lanka.

She was exposed to some Japanese shows and dramas and was inspired to dive deeper into the culture. This interest culminated in a decision to move to Tokyo to study tourism at Daito Bunka University from 2006. 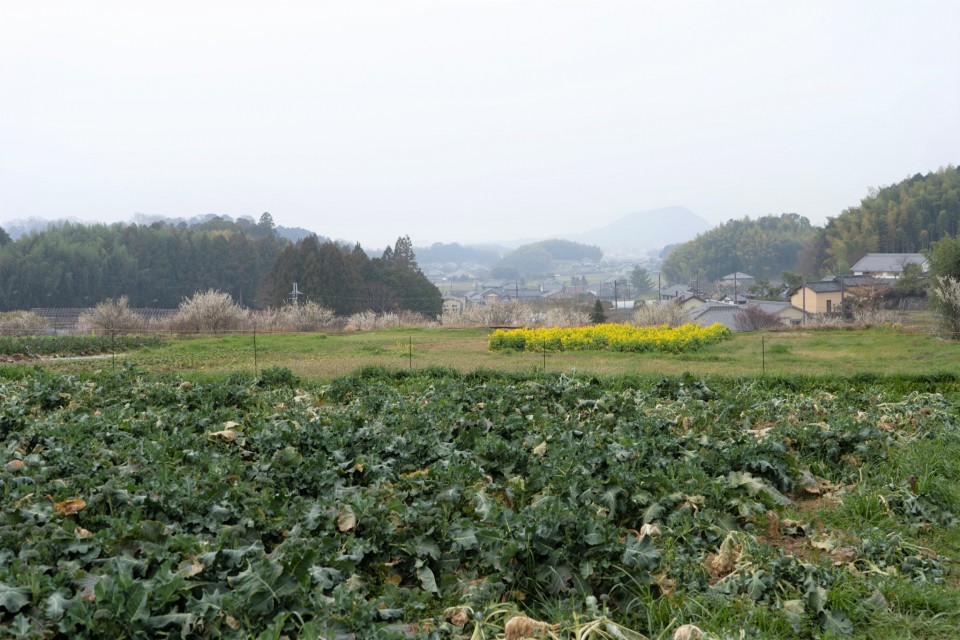 The small village of Asuka, Nara Prefecture is known for its many ancient "kofun" mounded tombs. (Kyodo)

She met Akio, a teacher who speaks Sinhala, one of Sri Lanka's official languages, and they moved to settle in his native Nara Prefecture.

After giving birth to their son, now 9 years old, Akio encouraged Udara to take up a hobby or find a job she would enjoy.

She worked in a range of jobs over a few years without finding something she was passionate about, and when her husband brought up farming as a possible change, she was skeptical about that, too.

"I was against it because it looked like hard work," she explained in fluent Japanese with a sometimes Kansai lilt. "But after going to a farming workshop, I realized that I liked it."

The yearlong workshop was run by the agriculture ministry to encourage people to work in the farm sector to solve the issue of major labor shortages, especially in rural areas, due to Japan's aging population.

Lectures ran for around four months before students took part in on-the-job training for about eight months.

Four years on, she has built a business growing produce ranging from tatsoi, an Asian leafy green, plus romaine lettuce and broccoli, among others. She is most dedicated to growing asparagus, however.

"During the workshop, I went to a lot of different farms to see how to grow various vegetables," she said, but it was asparagus that sparked her interest and imagination.

"When I first saw asparagus, it was a jungle of green. The greenhouse was stiflingly hot, but it was incredibly cool when I crouched down."

According to Udara, asparagus is fairly self-sufficient even when left alone and can reach nearly 2 meters tall if not trimmed. Although it can be harvested after one year, many farmers wait for three years so they can be rewarded with thicker and longer spears to take to market.

Moreover, asparagus, as a perennial plant, produces for as long as 10 years. 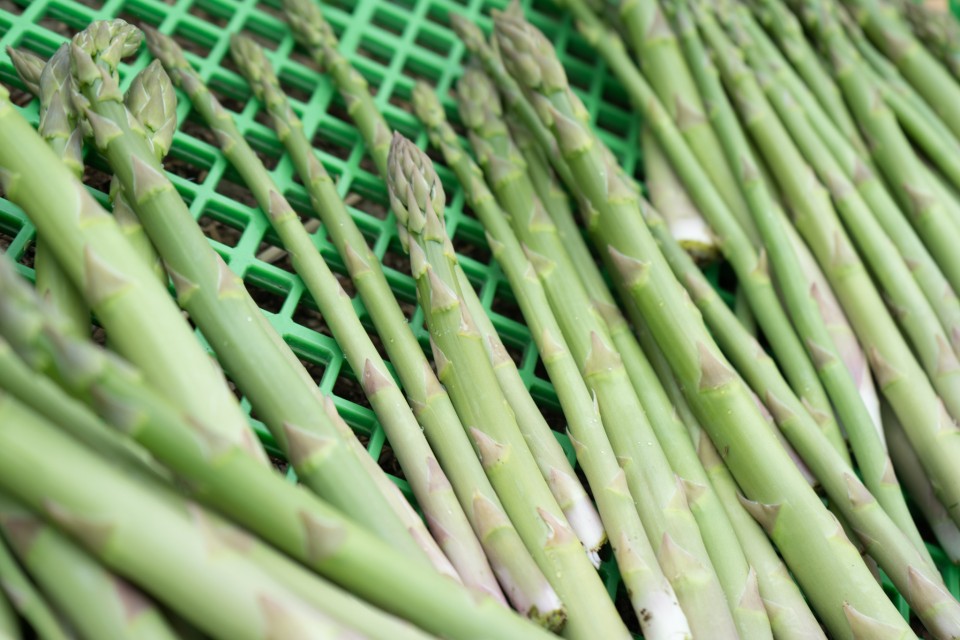 "We've waited three years to make something great," Akio said. Udara finally harvested her asparagus and sold them this spring.

While waiting for her perfect asparagus, she grew other produce but her focus remained on making the green spears her main business.

The two greenhouses she set up to grow asparagus are 50 meters long and have to be visited daily from February to October.

From November to January, asparagus cultivators have to lay down fresh fertilizer to get ready for the next season's harvest.

Although she never lacked motivation, Udara's journey has not been straightforward. As a mother and entrepreneur, she has to balance the early morning starts of a farmer with raising her child and managing the household.

"My son was 5 years old when I went to the farming training, but I needed to attend every day," she said. "During asparagus season, I have to tend to the vegetables from 5:30 in the morning."

Even though she gets some help from her friendly neighbors, Udara mostly does the heavy lifting herself.

Although exhausting, she focuses on putting her work in a positive light, framing the challenges she faces in a way that she can take joy from the difficult moments.

"So many people have helped and supported me," Udara said. "I'm still new to farming, so those with more experience have given me advice." 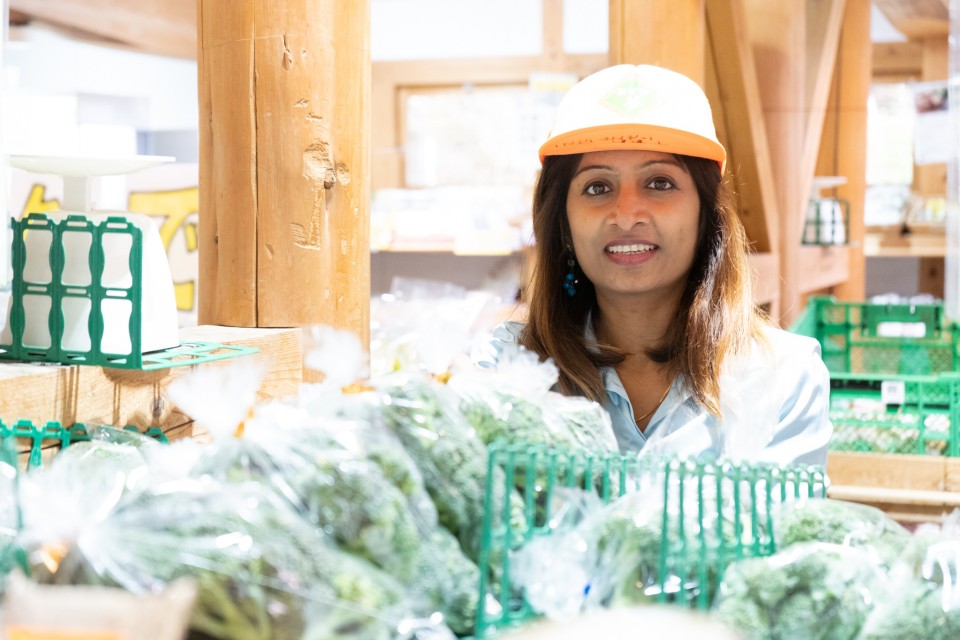 Udara Kametani from Sri Lanka provides a variety of fresh produce to around 50 stores around Asuka, Nara Prefecture, and neighboring prefectures in the Kansai region. (Kyodo)

"I'm constantly learning and happy when people cheer me on," she added.

Some of that support has come from her homeland, too.

Udara's Japanese farming exploits have seen her featured in Sri Lankan media, with people at home hailing her for following her dreams against heavy odds.

Now a few years into her farming career, Udara is looking to branch out and to add more variety to what she produces.

"I want to start growing summer vegetables you don't see often in Japan such as winged beans and cassava," she said.

Not happy just toiling on her farm, Udara also grows vegetables in her backyard for her family to eat and notes that she has a plan to grow various fruits in the near future.

Having lived in Japan for 14 years, she said she only occasionally returns to Sri Lanka, and only when she can drag herself away from her beloved farm.

Her commitment is commendable and shows she has what it takes to make her business a success, but when asked if she feels special to be the only woman from outside Japan working in her farming community, Udara remains modest.

"I personally don't think it's terribly unusual," she said with a grin. "But it makes me happy to do something different."