Japan's public broadcaster NHK apologized Tuesday for a short animation it used on a weekly news program on the background to the ongoing Black Lives Matter protests in the United States following accusations it presented racist stereotypes.

The clip, lasting 1 minute and 20 seconds, also made no reference to the death in police custody of George Floyd, an African American, on May 25 in Minnesota as the event that sparked the protests, instead focusing on economic grievances.

NHK took down the video from the show's Twitter account Tuesday afternoon, saying, "Due to criticism from viewers that the animation did not accurately describe the actual problem, we have removed the video. We apologize for the lack of consideration and any unpleasant feeling it created." 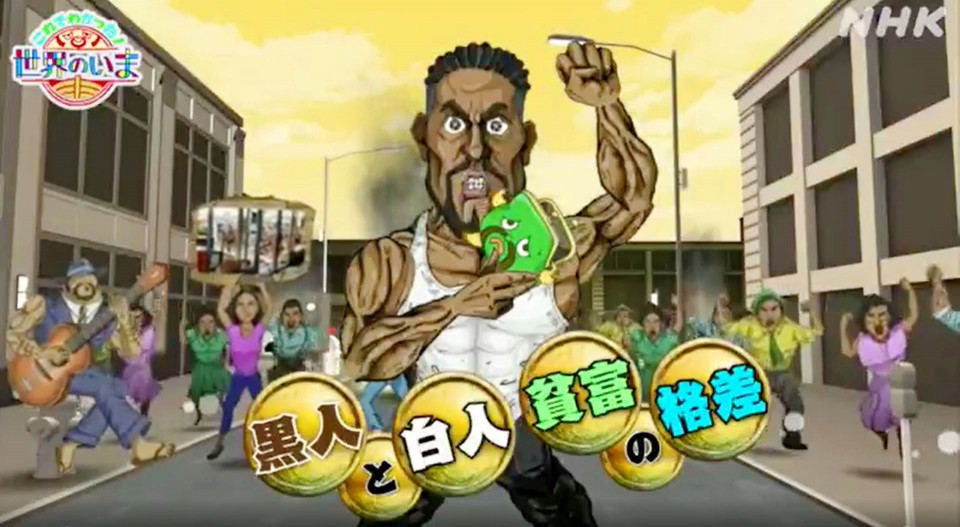 The broadcaster also stopped distributing the episode in question aired Sunday of the show "Kore de Wakatta! Sekai no Ima" (Now I Understand! The World Now) from its NHK Plus video streaming services.

The video depicts a musclebound black man in a white tank top holding an empty purse and yelling at a fully clothed white man. It was aired as part of the roughly 30-minute show that each week explains world affairs and their implications on Japan, and then posted on the program's Twitter account.

One black man with an Afro carries what appears to be a burning electrical appliance as if he has been engaged in looting while another -- also powerfully built -- strums a guitar while seated on a fire hydrant. Other black protestors march in outrage in the background.

While the program Sunday explained that the death of Floyd sparked the protests, the animation did not provide the crucial element that resulted in the outpouring of anger. The animation, which NHK said it wanted to make easily understandable for its audience, had received over 1.2 million views as of Tuesday afternoon.

In the posted clip, the black man displays an empty purse while raising his fist, explaining that the reason black people are angry is because of the economic disparity between black and white people. "Yeah, white people have seven times the average assets of black people," he says. 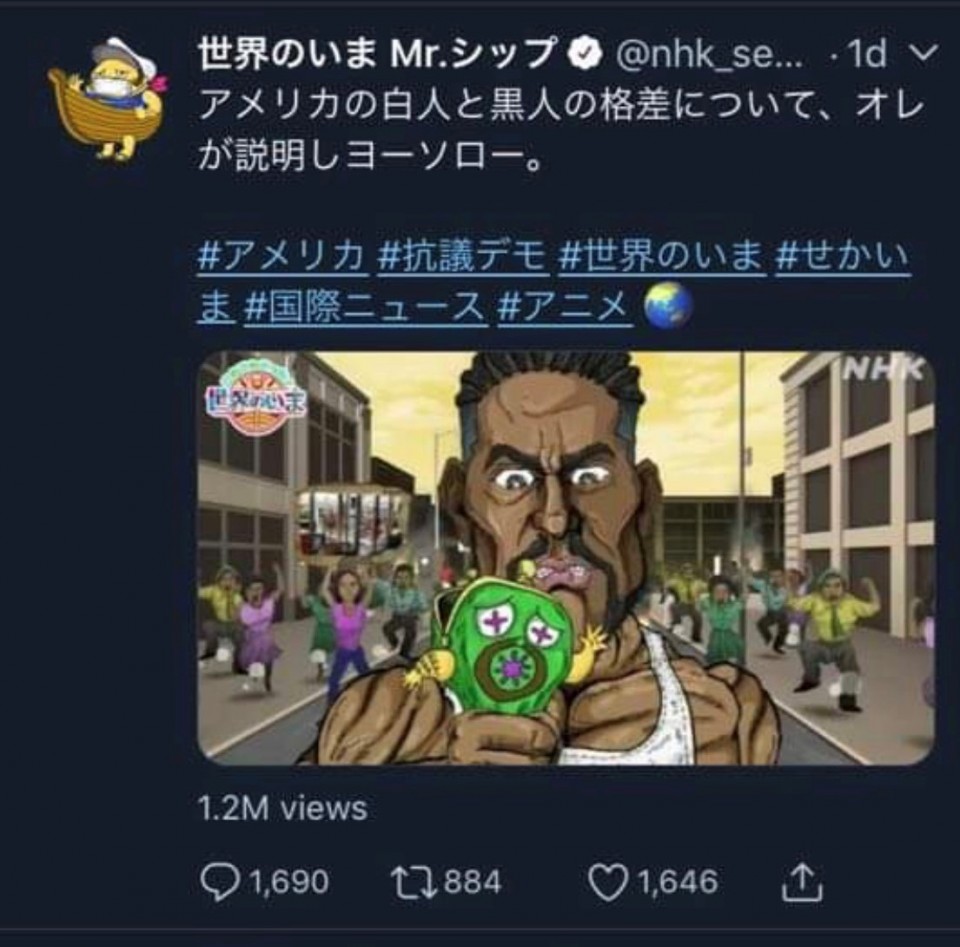 A screenshot taken on June 8, 2020, shows a tweet of a short animation cilp by Japan's public broadcaster NHK attempting to explain the background of the ongoing Black Lives Matter protests. (Kyodo)

"And then comes the coronavirus pandemic, which affected us black people the most. Hey, a question to you: How many black folks lost their jobs or got their hours cut?"

A mystified Statue of Liberty depiction looking on replies, "Hmmm..."

"Forty-five percent!" the black man, again pumping his fist, screams in a rough speaking voice typically used by Japanese ruffians while the top of his face turns beet red.

"No No No No No!!!" wrote one Twitter user about the video. "I can't even... It is not only spreading the wrong image and information, but this IS racism...is that what you want @nhk @NHK_PR? This is why we have to join #BlackLivesMatter in Japan."

Another wrote, "What the [expletive] is this? This is how you explain their situation? No respect, no understanding of their culture but straight racism. Please stop this."

"This just treats black people like they are a dangerous element," wrote a Twitter user in Japanese.

Joseph Young, the U.S. Embassy's charge d'affaires ad interim, tweeted, "While we understand @NHK's intent to address complex racial issues in the United States, it is unfortunate that more thought and care didn't go into this video. The caricatures used are offensive and insensitive."

While we understand @NHK's intent to address complex racial issues in the United States, it's unfortunate that more thought and care didn't go into this video. The caricatures used are offensive and insensitive.

There have been similar accusations of racism or cultural insensitivity in Japan in recent years.

A New Year's Eve TV show in 2018 sparked anger after a comedian painted his face to impersonate African American comedian Eddie Murphy -- using makeup in the antiquated practice known as blackface, which is seen as deeply offensive, to lampoon black people.

NHK's video comes on the heels of hundreds of people turning out in the Japanese capital and the western city of Osaka over the weekend to express support for the BLM movement, protesting racial injustice in the United States as well as racism in Japan.

The protesters also criticized the Japanese police for targeting foreigners after a Kurdish man claimed to have been thrown to the ground by police after a traffic stop.

Japanese tennis star Naomi Osaka, whose mother is Japanese and father Haitian, has come under online attacks recently for speaking out about racial injustice and encouraging people in Japan to join BLM marches.