Elementary, junior high and high schools in North Korea have resumed classes since Monday after a monthslong-closure over the new coronavirus pandemic, a state-run newspaper reported Tuesday.

Other facilities, such as nursery schools, kindergartens and nursing homes for the elderly, are also about to restart their operations, according to Minju Choson, the official Cabinet newspaper of North Korea. 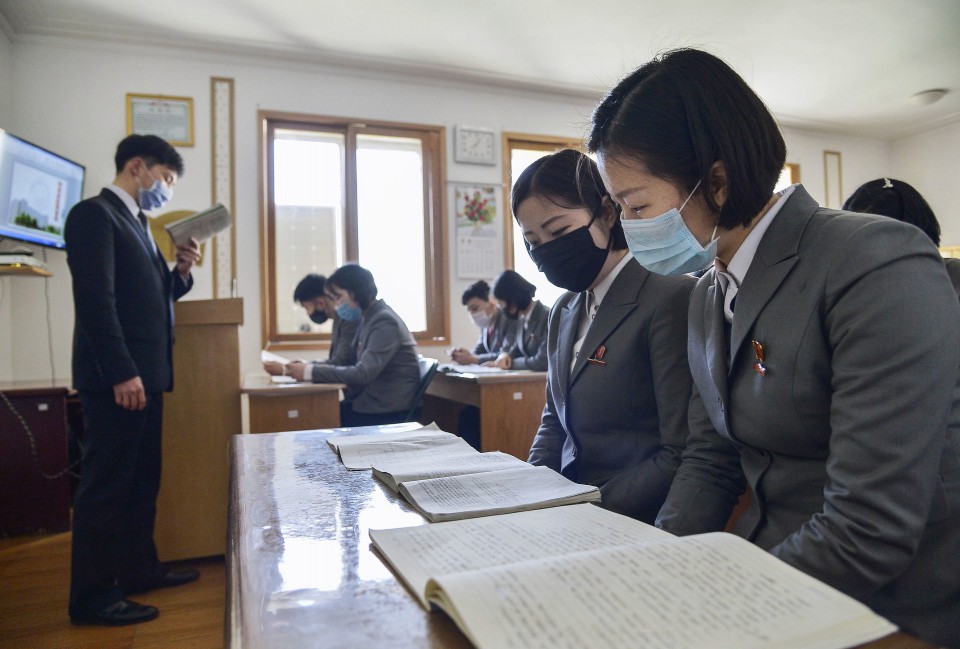 Masked students study in a classroom at the Pyongyang University of Foreign Studies in the North Korean capital on April 22, 2020, amid concerns over the new coronavirus. (Kyodo)

As the virus outbreak may be dealing a crushing blow to the country's economy, North Korea appears to be trying to bring social and economic activities back to normal as fears of an explosion in infections are apparently receding, foreign affairs experts say.

North Korea has cut off traffic to and from China and Russia for more than four months following the virus spread, making it more difficult for the nation to procure daily necessities and other commodities, a source familiar with the situation in Pyongyang said.

The total volume of China's trade with North Korea has plunged 90 percent at least for two months through April. Beijing is known as Pyongyang's closest and most influential ally in economic terms and North Korea depends on China for over 90 percent of its trade.

While North Korea has claimed to have zero cases of infection within its borders, citizens in Pyongyang have been wearing protective face masks in public places.

North Korea's authorities have remained on guard against the pneumonia-causing virus, urging workers at commercial facilities to measure their body temperature and calling on restaurants to use delivery services more frequently, Minju Choson said.

Recently, North Korea has resumed some exports, but air and rail services between the country and its two neighbors are likely to be suspended for an extended period. Foreigners living in North Korea have been stranded there.

Britain has temporarily closed its embassy in Pyongyang since last Wednesday and its diplomats left North Korea for China by land.

In the past, North Korea barred foreigners from entering the country during the 2003 outbreak of severe acute respiratory syndrome, or SARS, and the Ebola epidemic in West Africa in 2014.

The new coronavirus that causes the respiratory disease COVID-19, first detected late last year in the central Chinese city of Wuhan, has infected more than 6.2 million people globally and killed over 375,000, a tally by Johns Hopkins University showed.