Disaster drills were held in parts of Japan on Monday to prepare for the rainy and typhoon seasons, with new measures tested for preventing the spread of the novel coronavirus in the event of evacuations.

The move comes after the central government called for taking anti-infection measures at shelters. Downpours during the rainy season in June and July can lead to flooding while dozens of typhoons approach Japan every year, particularly in autumn, with about a handful making landfall and dumping heavy rain that can also lead to inundations. 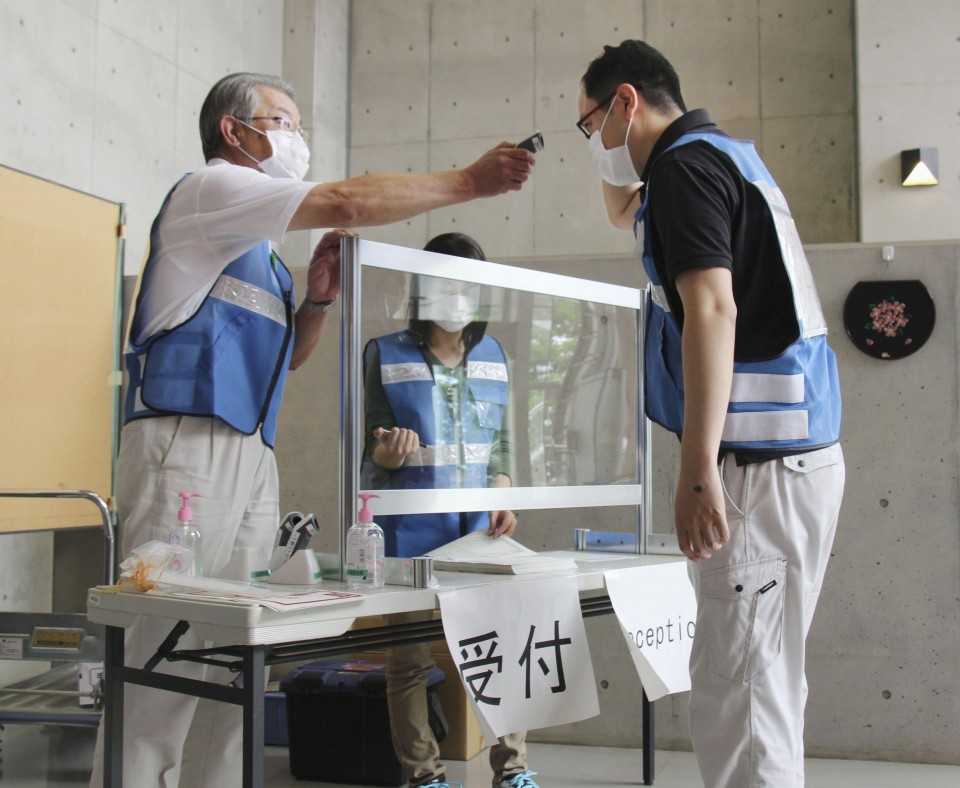 An official (R) playing the role of an evacuee has his temperature checked during a rehearsal in Joso, Ibaraku Prefecture, on June 8, 2020, as local authorities test out procedures to ensure safe operations of evacuation shelters amid the coronavirus pandemic. (Kyodo)

While the virus pandemic persists, many people are expected to take shelter in their vehicles rather than risk infection in crowded evacuation centers.

A civic group reviewed how to respond to such evacuees and shared the benefits and hazards of such behavior with local government officials during an evacuation drill in Hidaka in Kochi Prefecture, western Japan.

During past disasters, when many people also spent nights in their vehicles, aid supplies and other help often failed to reach them. They also faced the risk of developing economy class syndrome, in which blood clots form from staying in one position for a long period.

"By gathering those who wish to spend nights inside vehicles around evacuation centers and providing support, we can reduce the risk of economy class syndrome," said Mikio Yamasaki, 56, who heads the civic group of about 20 volunteer workers and construction company workers.

Some 30 disaster management officials from local governments came to watch the drill.

The city of Joso, Ibaraki Prefecture, northeast of Tokyo, went over the procedure for setting up an evacuation center at a designated gymnasium while trying to avoid close contact among people.

Disaster management officials and health workers took part, checking how to set up panels for preventing infections, how to guide evacuees so they do not form a crowd and how many people and how much time are needed to do so.

In April, the Cabinet Office asked prefectural governments to implement measures against virus infections, including urging them to open as many evacuation centers as possible and utilize hotels to prevent crowding during emergencies.