As Prime Minister Shinzo Abe finds himself bogged down in another political scandal, some observers believe it could prove to be a decisive turning point in his premiership.

Japan's longest-serving leader has been powerless to prevent a chain of events, including the coronavirus crisis, from eroding public confidence in his leadership and administration.

Now Thursday's arrests of his close aide and former justice minister Katsuyuki Kawai and his wife Anri on suspicion of vote buying in the 2019 upper house election come as another blow to Abe as prime minister and head of the Liberal Democratic Party to which the couple had belonged.

As Abe has faltered, his longtime rival Shigeru Ishiba has emerged in recent media polls as the most likely party figure to succeed him. The former defense minister is apparently seeking to cozy up to LDP heavyweights who are close aides to the prime minister. 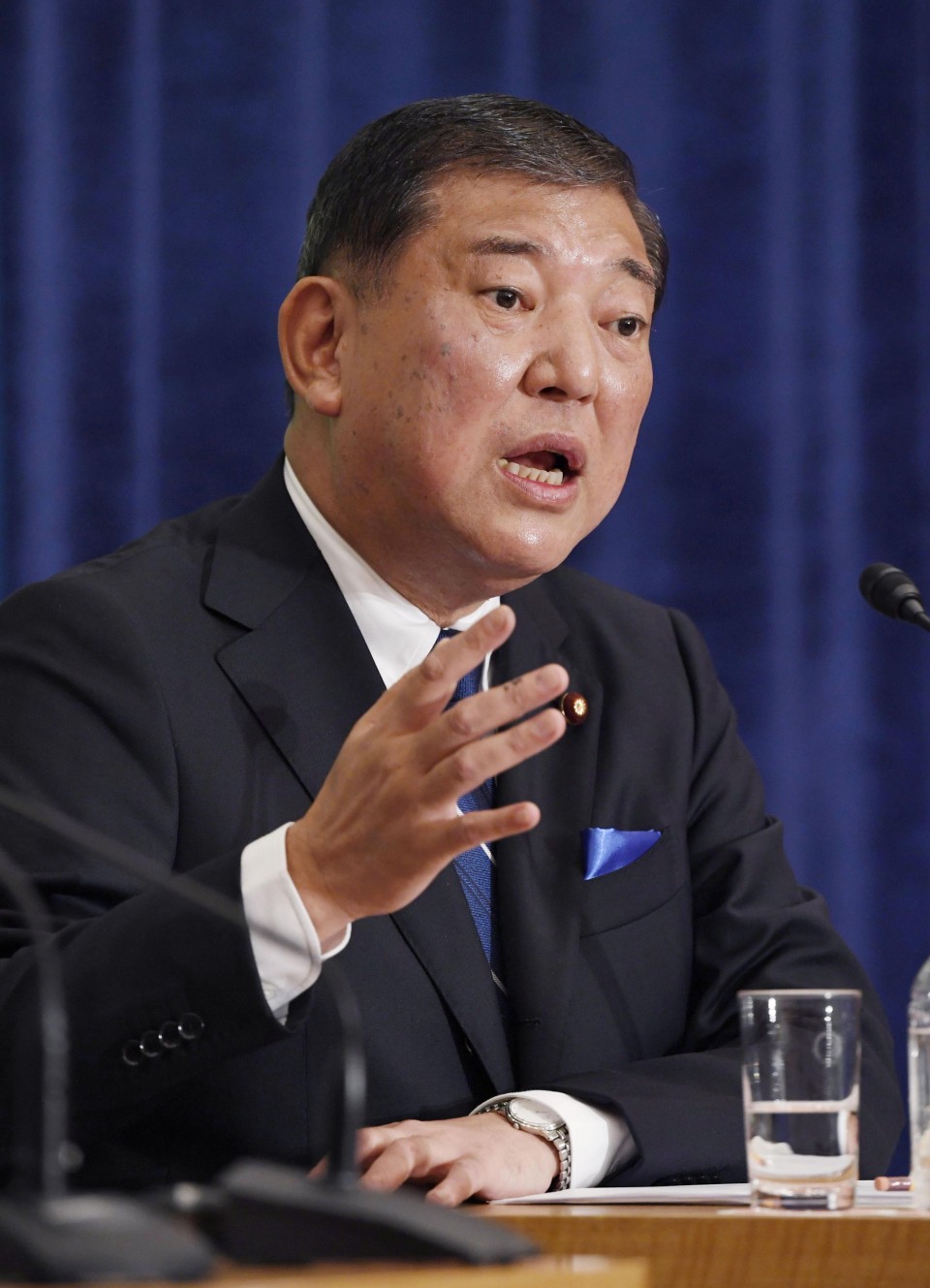 Former Defense Minister Shigeru Ishiba, who is running in the upcoming leadership election of the ruling Liberal Democratic Party, speaks during a debate session at the Japan National Press Club in Tokyo on Sept. 14, 2018. (Kyodo)

With more than a year left in his current term as LDP head and thus prime minister, Abe will be hoping to put the bad times behind him while parliament is in recess, but political analysts say regaining public trust may be harder than before.

"There are emerging signs of an administration entering its final stage," said Tomoaki Iwai, a political science professor at Nihon University.

The risk of losing his grip on power and the LDP will increase if public support remains low, leaving him with no choice but to focus on maintaining the status quo, according to Iwai.

"The coronavirus outbreak obviously pulled the trigger. He can neither quit nor call an election while support ratings are low. Foreign diplomacy is not an option due to the virus. So he cannot do anything unless the pandemic ends," Iwai said.

Since returning to power in 2012, Abe has enjoyed relatively strong public support, fending off a fractured opposition bloc.

Abe has ridden out scandals involving his Cabinet ministers and himself, including a state-funded cherry blossom viewing party that he was alleged by opposition lawmakers to have used to entertain supporters.

But the coronavirus outbreak changed the landscape as voters became more interested in what the administration was doing to protect their livelihoods and lives.

"People who were asked to stay at home and work remotely due to the coronavirus had more time than usual to follow the news. That changed their evaluations of the Abe administration too," said Hiroshi Hirano, a political psychology professor at Gakushuin University.

It was only recently that the distribution of reusable cloth face masks to all households was almost completed after criticism about their quality and slow delivery.

Abe's posting online of a video clip showing him relaxing with a dog also rubbed some people up the wrong way despite its intended message that staying at home is important.

Abe's policy flip-flops in recent months have also not helped his image and have angered some LDP lawmakers.

Only under pressure from the Komeito party, the LDP's junior coalition partner, did Abe decide to distribute 100,000 yen ($935) per person, and only a few days before a regular Diet session closed on Wednesday the government announced the suspension of a plan to deploy Aegis Ashore land-based missile defense systems due to technical and cost issues.

"We wanted (the government) to consult with us in advance," a senior LDP lawmaker said of the change to the Aegis Ashore deployment plan, which was pushed by Abe's Cabinet to counter ballistic missile threats from North Korea.

The government also had to scrap a controversial bill to raise the retirement age of high-ranking prosecutors after a chorus of criticism that it gives the Cabinet undue influence over the judiciary. 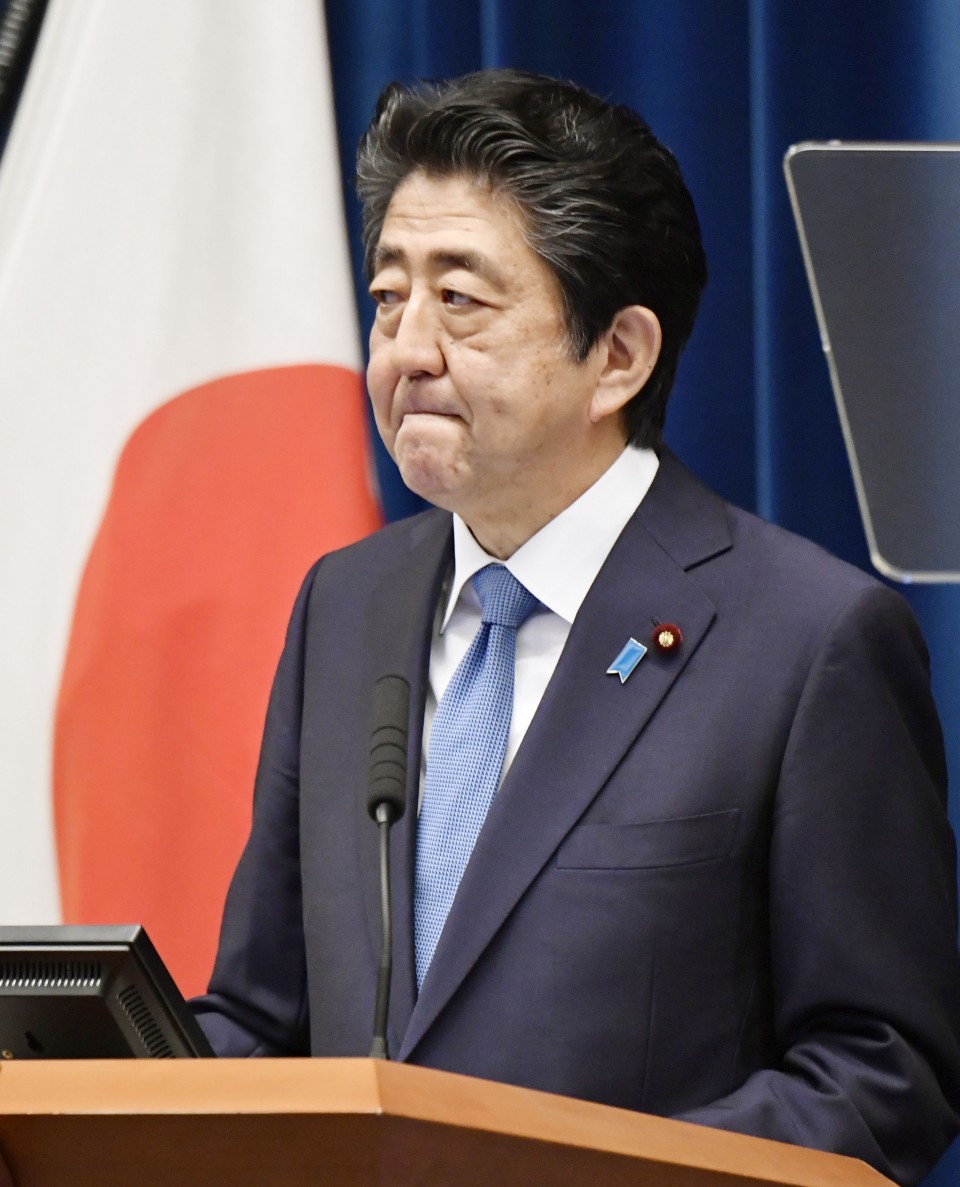 Japanese Prime Minister Shinzo Abe speaks during a press conference in Tokyo on June 18, 2020, wrapping up the government's anti-coronavirus measures as business restriction requests by authorities are set to be fully lifted in Japan on June 19. The press conference was held a day after Japan's parliament concluded a 150-day ordinary session, with Abe's ruling coalition rejecting calls from the opposition camp for an extension to the year's end to cope with the ongoing coronavirus crisis. (Kyodo)

In the most recent Kyodo News poll in late May, the approval rate for the Cabinet slipped below the 40 percent mark for the first time since May 2018 at 39.4 percent. The disapproval rate rose to 45.5 percent.

Hirano said voters tend to use criteria such as "integrity, empathy, leadership skills and policies" when judging a political leader.

"After the recent sequence of events that unfolded, there are question marks over all four," the professor said. "It's hard to say whether it is the beginning of a downtrend in public support or just temporary, but a negative loop can kick in."

Some within the administration apparently hope that the 100,000 yen cash handout program will do the trick and help support ratings pick up in the coming months.

Abe has said he will not seek another term as LDP president beyond September 2021 and eyes are increasingly on who will succeed him and any change in the LDP's power balance.

Ishiba, who has competed with Abe in the past two LDP presidential elections, has been gathering public support against the backdrop of the prime minister's struggles, though political observers say he needs to increase the number of backers within the party.

Ishiba recently spoke of the need for decentralization in Japan with more focus on regional areas as a priority for an administration.

Despite the prevailing view that Abe does not want to dissolve the House of Representatives for an election for now, some ruling and opposition party lawmakers speculate it could come as early as this fall.

The poll, which has to be held before October 2021 when the current four-year term of lower house members expires, will be closely watched for its implications for the next LDP leadership race.

"We are already stepping up preparations" in case Abe dissolves the lower house for an election, a person close to Ishiba said.

Abe, for his part, remained elusive on Thursday, saying that dissolving the lower house has not crossed his mind but he will not hesitate to do so when the time is right.

"In the past, we saw a different prime minister every year. But I still have a year and three months left in my current term so I will give it my all," he said in a nationally televised press conference.