Japanese professional baseball clubs held practice games on Tuesday to prepare for their scheduled season openers, which have been delayed for roughly three months to June 19 due to the new coronavirus pandemic.

A total of 71 practice games are scheduled between Tuesday and June 14, all behind closed doors, after Nippon Professional Baseball decided on the date of this year's Opening Day last week. 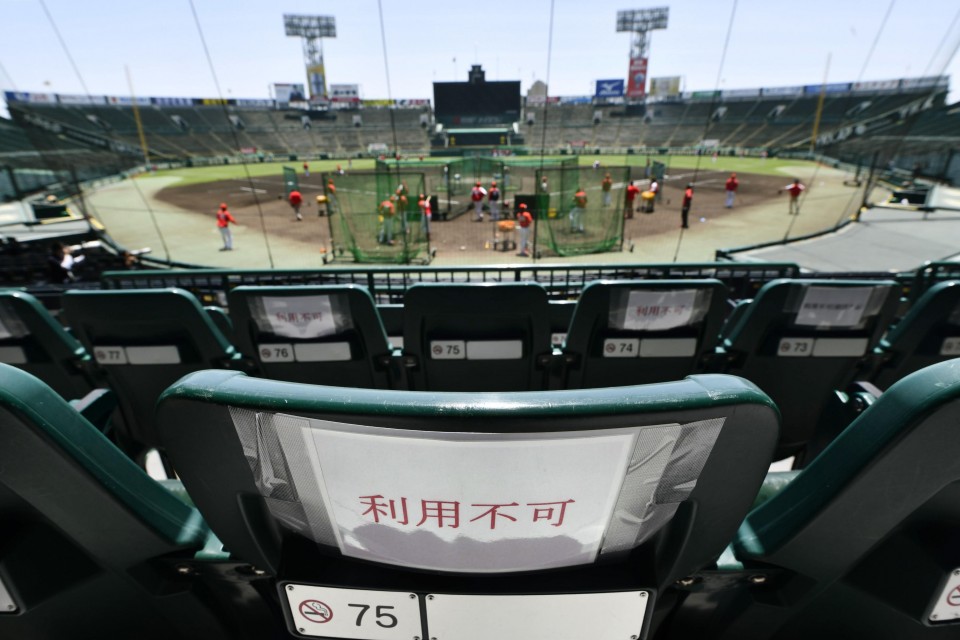 Photo taken June 2, 2020, shows Koshien Stadium in Nishinomiya, western Japan, before a practice game between the Hanshin Tigers and the Hiroshima Carp. Japan's coronavirus-delayed baseball season is scheduled to begin on June 19. (Kyodo)

The 12 teams have been divided into two groups depending on where they are based and will face teams in the same group to restrict cross-country travel.

Four games were held in Tokyo and its surrounding areas on Tuesday, and two were scheduled in western Japan.

Teams and officials took precautionary measures against the pneumonia-causing virus as the delayed season's preparations went into full swing. Umpires wore face masks to prevent infections, while players refrained from giving high-fives to each other.

At Jingu Stadium in Tokyo, Yakult Swallows players gave infielder Tetsuto Yamada air-fives after he drove in a run in their 15-3 win over the Chunichi Dragons.

"It felt sad not to be able to give high-fives," Yamada said.

The 2020 NPB season had been slated to begin on March 20 before the outbreak of the pneumonia-causing virus halted major sports events across the country.

NPB is creating guidelines on how to safely hold games in Japan using instructions from the Taiwanese and South Korean pro leagues that have already resumed playing.