Tokyo Gov. Yuriko Koike issued a warning Tuesday amid signs of a possible resurgence of coronavirus infections, as 34 cases were newly reported in the Japanese capital.

The warning she calls a "Tokyo alert" serves as a call for caution. But if the number further increases, the Tokyo government plans to issue requests again to businesses and people that would halt social and economic activities. 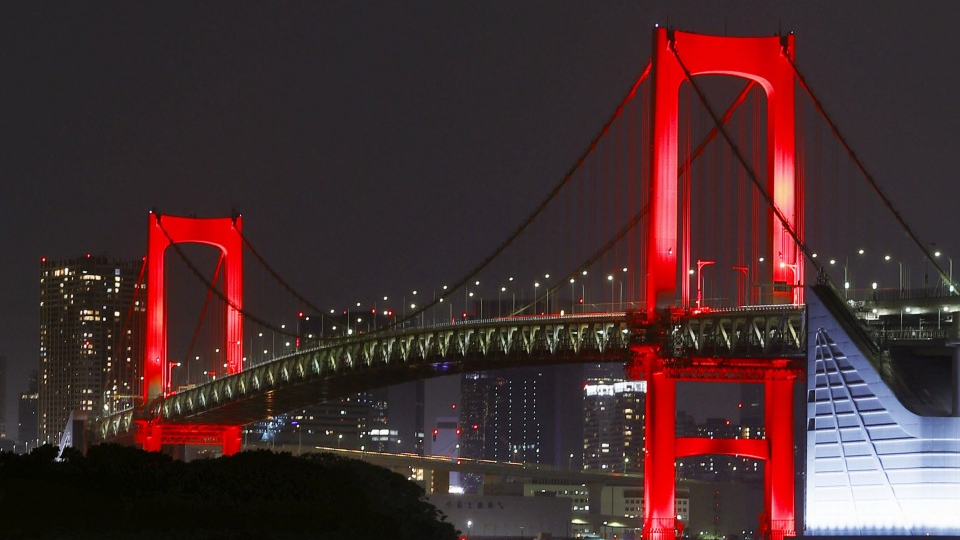 Rainbow Bridge, a Tokyo landmark, is lit up in red on June 2, 2020, after Tokyo Gov. Yuriko Koike issued a warning amid signs of a possible resurgence of coronavirus infections with 34 cases newly reported in the Japanese capital. (Kyodo)

The number is the highest since Japan fully lifted its state of emergency last week and the first time since May 14 for daily infection cases to top 30.

At a coronavirus task force meeting late Tuesday, Koike urged Tokyo residents to "be very cautious of going to places such as the nightlife districts" that put people at risk of being in closed spaces, crowded places and close contact with people.

She told reporters, "Among today's figures, I've received reports that there are many people" related to the nightlife industry especially in Shinjuku.

The alert, however, is not intended to move back the phases she has already implemented, according to Koike.

"The request to suspend business will be considered when there are more than 50 positive cases in a day and also evaluating other indexes," she said. 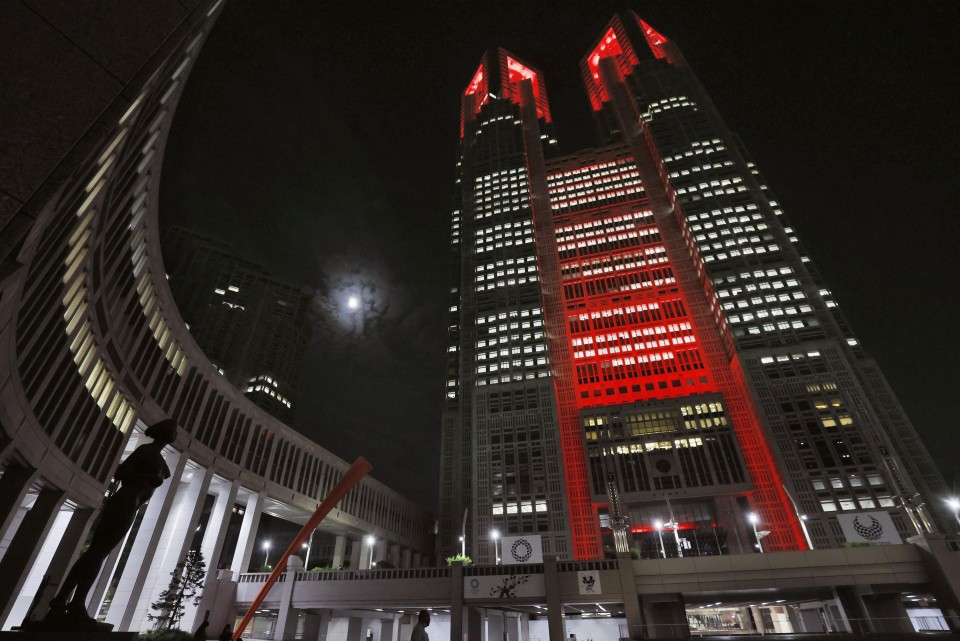 The Tokyo metropolitan government building is lit up in red on June 2, 2020, after Tokyo Gov. Yuriko Koike issued a warning amid signs of a possible resurgence of coronavirus infections with 34 cases newly reported in the Japanese capital. (Kyodo)

Tokyo has had the largest number of infections in Japan since late March, after which it reported its first three-digit increase of 116 on April 4. The figure has been gradually decreasing since mid-April, but this week Tokyo has seen a slight bump up.

Koike said last month that Tokyo will issue the alert if the number of new infection cases exceeds 20 a day or the ratio of the weekly new infection increases to more than one compared with the previous week. Another yardstick would be if the ratio for unknown infection routes climbs to more than 50 percent.

If the numbers exceed maximum-allowed levels on several indexes, other barometers will be taken into account.

The number of infected people in the past seven days compared with the previous seven days was more than double and the ratio for unknown infection routes was 50 percent, which met the standard to issue the alert, a Tokyo government official said.

However, the daily average of newly confirmed cases in seven days was 16.3 people, which was below the criterion, the official said.

Based on the indexes, even after the alert is issued and people are urged to be on guard, business suspensions can be requested again, and people will be asked to refrain from nonessential outings.

Out of the newly confirmed 34 cases, infection routes of 12 were unknown, according to the Tokyo government.

Musashino Central Hospital in Tokyo said Tuesday that a total of 15 of its patients and staff tested positive for coronavirus. 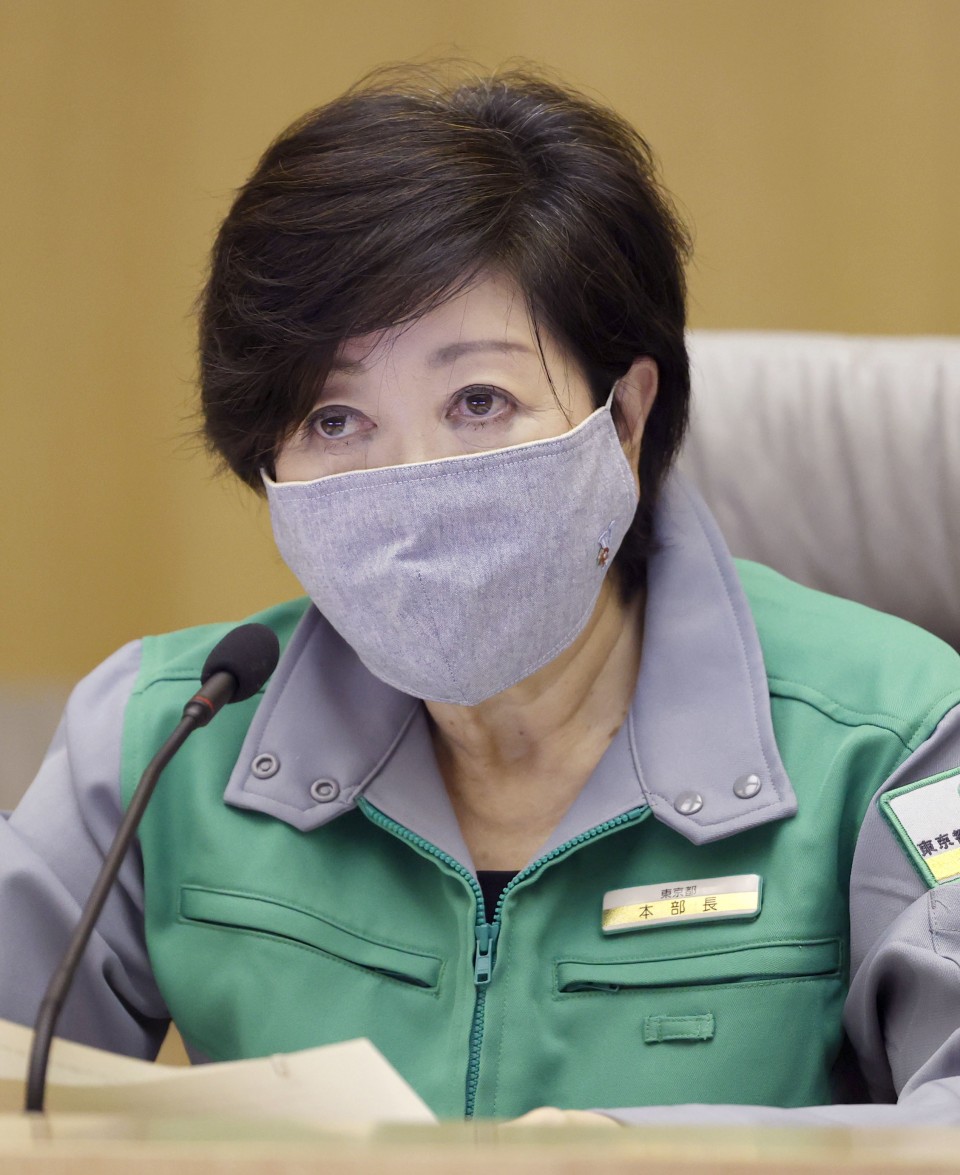 As of Tuesday, the tally has brought the total number of infections in the Japanese capital to 5,283 and 306 deaths, while the number for the entire country reached 16,951 cases and 903 deaths, excluding those from the Diamond Princess cruise ship that was quarantined in Yokohama near Tokyo in February.

Following the Japanese government's lifting of the state of emergency on May 25, the country took cautious steps in reopening the economy.

Tokyo has laid out a three-step plan to ease virus restrictions, with museums, schools and sports facilities without spectator stands reopened in the first phase. The second phase saw movie theaters and sports gyms reopen on Monday.

Karaoke boxes and bars will be able to reopen in the third phase of the capital's road map, which was revised following the inclusion of such establishments in the central government's post-emergency policy last week.

The Tokyo metropolitan government building and the capital's landmark Rainbow Bridge were lit up in red from 11:00 p.m. to indicate the governor's warning was issued.

Meanwhile, in the city of Kitakyushu in Fukuoka Prefecture, southwestern Japan, six new coronavirus cases were confirmed Tuesday. The city has recently seen an increase in the number of such cases.

In the 11 days through Tuesday, the city reported a total of 119 cases after having logged no new cases between April 30 and May 22. The number has reached a total of 775 in the whole prefecture.

Economy minister Yasutoshi Nishimura said Sunday that the government has no immediate plan to place Tokyo and Fukuoka Prefecture under a state of emergency again despite the areas seeing an increase in cases.