The top European business lobby in Japan on Monday called on the government to ease travel restrictions meant to curb the spread of the novel coronavirus, saying the measures are too tough on foreigners and risk driving away foreign investment.

Mroczek warned that the uncertain situation could push European companies with their Asia-Pacific headquarters in Japan to begin considering moving elsewhere. 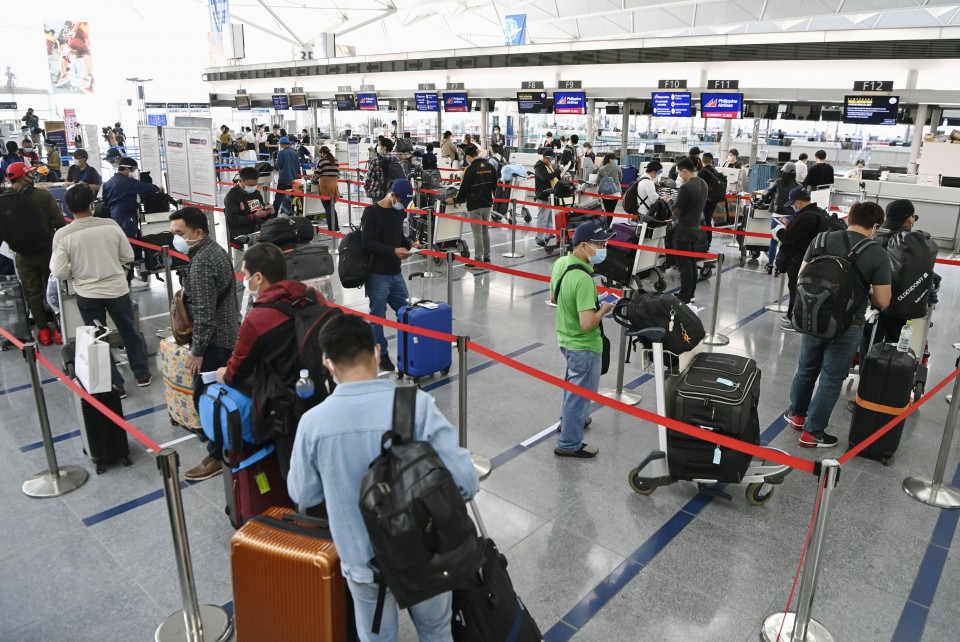 People wait before check-in counters at Chubu airport in Aichi Prefecture, central Japan, on June 17, 2020, as the airport resumed some international flights earlier in the day following its coronavirus-necessitated suspension since April 1. (Kyodo)

"Businessmen who are based here, they cannot go to Korea, they cannot travel to Singapore and are pretty much restricted in what they are doing," he said in a press conference at the Foreign Correspondents' Club of Japan.

Japan imposed an entry ban on foreign nationals arriving from parts of China in early February and has since expanded it to cover 111 countries and regions, including the whole of Europe. Foreigners who have been to any of the areas within 14 days of arriving in Japan are being turned away.

Discussions are under way to ease the travel restrictions for Australia, New Zealand, Thailand and Vietnam, possibly in the summer, but it remains unclear when the other countries will be taken off the list.

Mroczek pointed out that the measures were much stricter than in Europe, where foreigners with permanent residency and essential workers such as health-care professionals are able to enter and move within the 26-member Schengen Area.

It has put European companies operating here at a competitive disadvantage to their Japanese rivals, he said.

"I heard also from an important cosmetics manufacturer that the European executives based here in Japan cannot travel to Europe with their customers or meet customers in Europe, whereas their counterparts from Japanese companies can just get into the plane and fly back to Europe."

Japan should immediately begin letting permanent and long-term residents back in, Mroczek said, adding that they make up only about 2 percent of the population and in any case there is little reason to set different standards because everyone is just as likely to be carrying the virus.

Businesspeople should be accepted next, followed by tourists, he said.

Japan and Europe have seen increased trade following the entry into force of an economic partnership agreement in February last year, with European exports such as wine and butter receiving a boost.

Mroczek said the agreement had a "very positive impact" on European businesses but was at risk of "losing the momentum" because of Japan's travel restrictions.

A lawyer by trade, Mroczek ruled out mounting a legal challenge to the entry ban.

"I'm not here to argue with the Japanese government about the interpretation (of the law). We take what we get. But we certainly are asking that there is an equal treatment with Japanese citizens and there is a reciprocity with the EU," he said.