Foreign ministers of the Group of Seven industrialized countries on Wednesday expressed their "grave concern" over China's recent decision to impose a national security law on Hong Kong and urged Beijing to reconsider the move.

The proposed law would "risk seriously undermining" the territory's high degree of autonomy guaranteed under China's "one country, two systems" policy, according to the statement issued by Britain, Canada, France, Germany, Italy, Japan and the United States as well as the European Union.

"We strongly urge the government of China to reconsider this decision," it said. 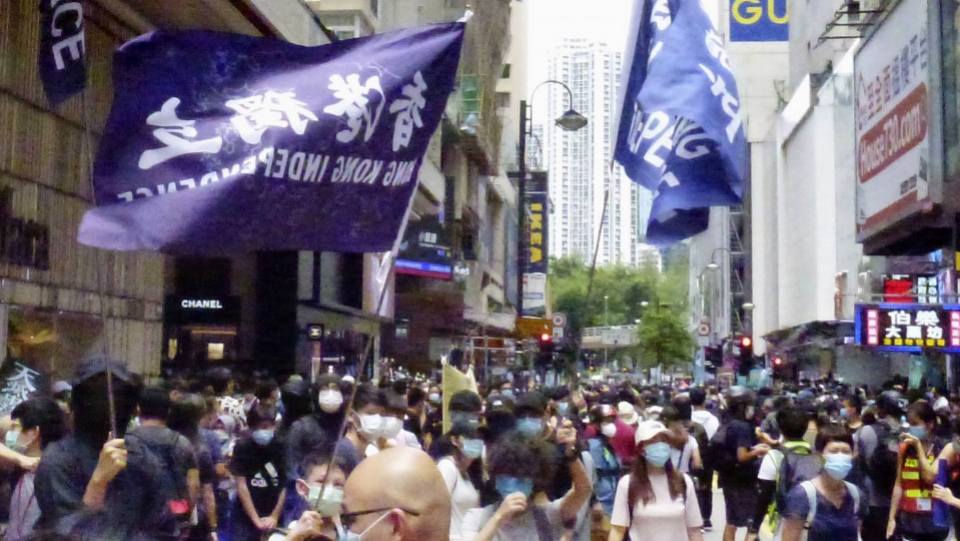 People protest in Hong Kong on May 24, 2020, against China's move to introduce the mainland's national security law in the territory, which is feared will hurt Hong Kong's autonomy. (Kyodo)

The Chinese Foreign Ministry later said foreign policy chief Yang Jiechi told U.S. Secretary of State Mike Pompeo during their meeting in Hawaii on Wednesday that Hong Kong affairs, including the legislation, are internal Chinese matters, and that Beijing is adamant about enacting the law for Hong Kong.

Japanese Prime Minister Shinzo Abe has been eager to spearhead G-7 efforts to come up with a statement expressing concern over the Hong Kong issue, after four countries including the United States issued a joint statement on May 28 condemning China over its decision to introduce the controversial legislation. The law is aimed at cracking down on what Beijing views as subversive activities in the territory.

On the same day, Japan's top government spokesman expressed the country's "serious concerns" over the legislation at a press conference. But Japan and the European Union both opted out of becoming signatories of the May 28 statement, according to sources close to the matter.

Japan's failure to join the May 28 statement has been seen by some critics as a sign of reluctance to antagonize China even though the United States, its close ally, has been increasingly tough on Beijing.

With the G-7 countries directly urging China to revisit its decision, the latest document seems to have taken on a tougher tone than the May 28 statement.

In the statement released Wednesday, the G-7 foreign ministers emphasized their "grave concern regarding China's decision to impose a national security law on Hong Kong."

They also said the decision "would jeopardize the system which has allowed Hong Kong to flourish and made it a success over many years."

In the May 28 document, Australia, Britain, Canada and the United States expressed their "deep concern" over the move and warned that it could "dramatically erode" Hong Kong's high degree of autonomy.

But it is feared that the national security law, which China says is needed to tackle separatism, subversion, foreign interference and terrorism in Hong Kong, would provide Beijing more opportunities to erode freedoms and human rights in the territory.

The G-7 foreign ministers also criticized China in the statement for failing to honor its international commitments under the 1984 Sino-British Joint Declaration, a legally binding international treaty that made clear Hong Kong's rights and freedoms.

The United States has also reacted harshly against China, with President Donald Trump initiating a process to revoke special treatment for Hong Kong that has helped make the territory an attractive investment destination and international financial hub.