North Korean troops are redeploying to two areas that had been demilitarized under agreements with the South, official media said Wednesday following Pyongyang's demolition of a joint liaison office, in a sign that their recent efforts at reconciliation have gone up in smoke.

In a statement carried by the news agency, Kim Yo Jong also criticized Moon's offer in a speech earlier in the week of inter-Korean dialogue, saying he had "reeled off a string of shameless and impudent words full of incoherence."

The South later rebuked North Korea for snubbing Moon's offer to send the envoys, saying disclosing the unannounced proposal was an "unprecedented and irrational act." 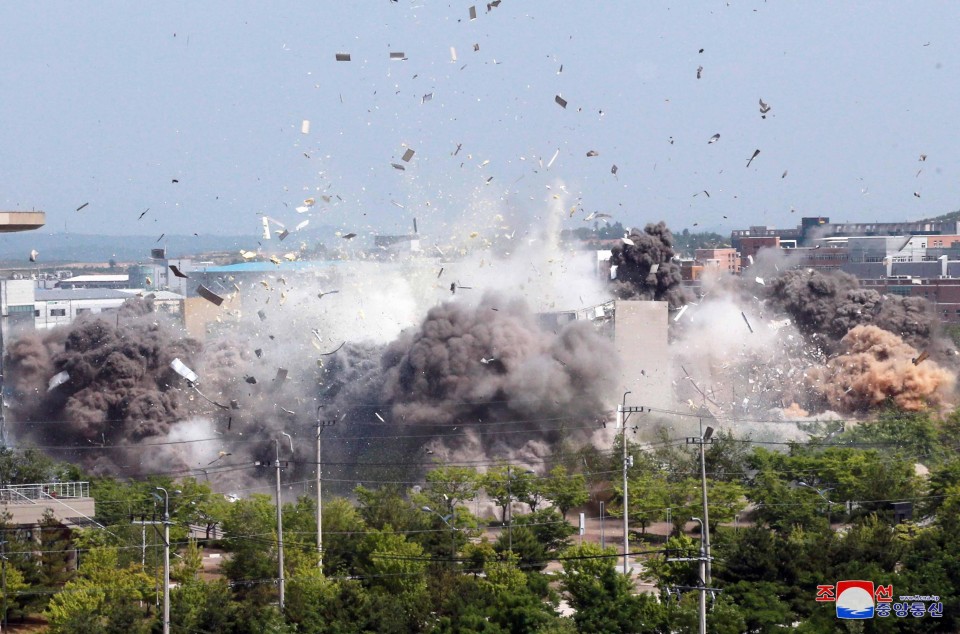 Photo shows the explosion of an inter-Korean liaison office in Kaesong, North Korea on June 16, 2020. (KCNA/Kyodo)

Moon's office also said that remarks Kim Yo Jong had made directly critical of the president were "very rude" and could not be tolerated, warning they would lead to a loss of trust between the leaders of the two Koreas.

The latest inter-Korean tensions, which have escalated in the wake of the scattering of leaflets lambasting Kim Jong Un's reign, could develop into a military clash in the worst-case scenario, as the North is unlikely to extend an olive branch to the South.

Since early June, Pyongyang has taken a tough stance against Seoul, as North Korean watchers have speculated that Kim may be worried that an economic slump stemming from the coronavirus pandemic could be eroding his political clout at home.

Moon has made serious efforts at achieving a thaw in relations by holding three summits with Kim in 2018. But, ties between the two nations have deteriorated to their worst level since the left-wing president took office in 2017.

The South Korean military separately said the North would "pay the price" if it puts its words into action in relation to its planned reinforcements among troops on the front line.

"I thought someone has to be held responsible," Kim told reporters in Seoul.

A spokesman for the General Staff of the Korean People's Army, the North Korean military, said in Wednesday's statement via KCNA that it is sending regiment-level units to the Mt. Kumgang resort area on the east coast and the Kaesong Industrial Zone in the western border area.

The spokesman also said the military will set up guard posts that had been withdrawn from the Demilitarized Zone dividing the two Koreas under a bilateral agreement.

Both areas were previously sites for economic cooperation projects with the South.

The artillery units deployed in the western Yellow Sea side of the country will also "upgrade the level of the front guard duty" and resume "all kinds of regular military exercises in the areas close to the boundary," the spokesman said.

The statement added that the military's General Staff will work out "military action plans against enemy" in more detail and present them to the Central Military Commission of the ruling Workers' Party of Korea at the earliest date.

On Tuesday, North Korea blew up the joint liaison office located in the border city of Kaesong, in retaliation for anti-Pyongyang leaflets sent across the border by balloon by defector groups and other activists.

The office, opened in September 2018 and staffed with personnel from both North and South Korea until early this year, was a symbol of inter-Korean reconciliation that had begun that year with a series of summit talks between Moon and Kim Jong Un.

North Korea's economy, meanwhile, is believed to be shrinking as trade with China, its closest and most influential ally in economic terms, has become sluggish against a backdrop of the closure of the border with its neighbor amid the global virus spread.

Also, North Korea has so far failed to convince the United States to ease sanctions that have choked the nation's trade, while Seoul has hesitated to proceed with economic cooperation projects with Pyongyang in the face of opposition from Washington.

Kim Jong Un has been frustrated with Moon, who has called himself a "broker" between Pyongyang and Washington, as the South's president has fallen short of helping the North produce results in its denuclearization talks with the United States, observers say.

FOCUS: North Korea's Kim may use South to boost influence of younger sister