The chief of Fast Retailing, the operator of the Uniqlo casual clothing chain, said at a press conference that he will provide 5 billion yen through April 2030 to a foundation he will set up at the university's Center for Cancer Immunotherapy and Immunobiology, headed by Honjo, for research promotion and education of young researchers. 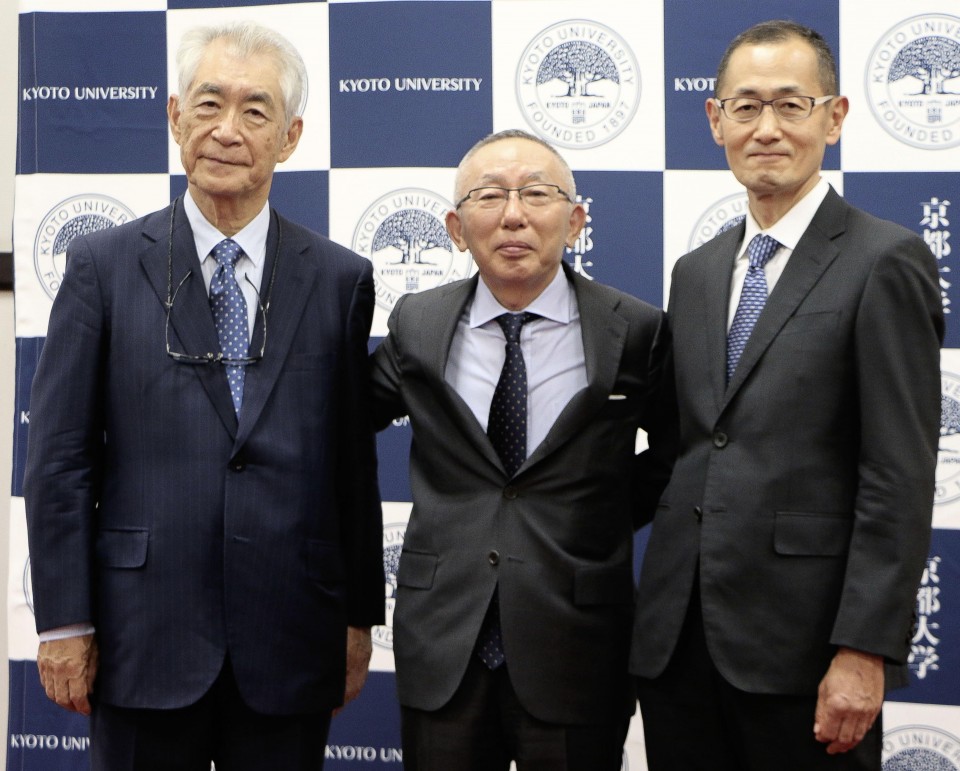 Tadashi Yanai (C), chairman and CEO of Fast Retailing Co., the operator of casual wear chain Uniqlo, poses for a photo with two Nobel Prize winners -- Tasuku Honjo (L) and Shinya Yamanaka -- at a press conference in Kyoto on June 24, 2020, after announcing that he will donate a total of 10 billion yen ($93 million) to Kyoto University to support its medical research under the two scientists. (Kyodo)

Yanai will also donate 4.5 billion yen to support a project to create low-cost iPS cells from individuals, dubbed "my iPS cells," to prevent immunological rejection and 500 million yen for medical research to develop a vaccine for the novel coronavirus using iPS cells at the Center for iPS Cell Research and Application, led by Yamanaka.

Yanai was ranked 41st in Forbes list of the world's wealthiest people for 2020, the highest among Japanese citizens.

"The biggest challenges in medicine are cancer and viruses. The two professors' medical studies will contribute to the whole world," said Yanai, who accepted a request for the donation from Honjo.

Yanai and Honjo graduated from the same high school in Ube, Yamaguchi Prefecture in western Japan.

"Donations from private sectors can be flexibly used and greatly appreciated, as they will give my research an outlook for a long period of time," Honjo said.

"I feel I have a great responsibility. I would like to start producing 'my iPS cells' in 2025 by effectively using the donation," Yamanaka said.