A group of professors in Japan sent a petition to the education ministry Monday demanding it scrap "discriminatory" criteria for foreign students to be eligible for cash handouts to mitigate financial difficulties amid the coronavirus pandemic.

The petition was launched by nearly 40 professors after the government decided not to treat foreign and Japanese students equally over the support program. 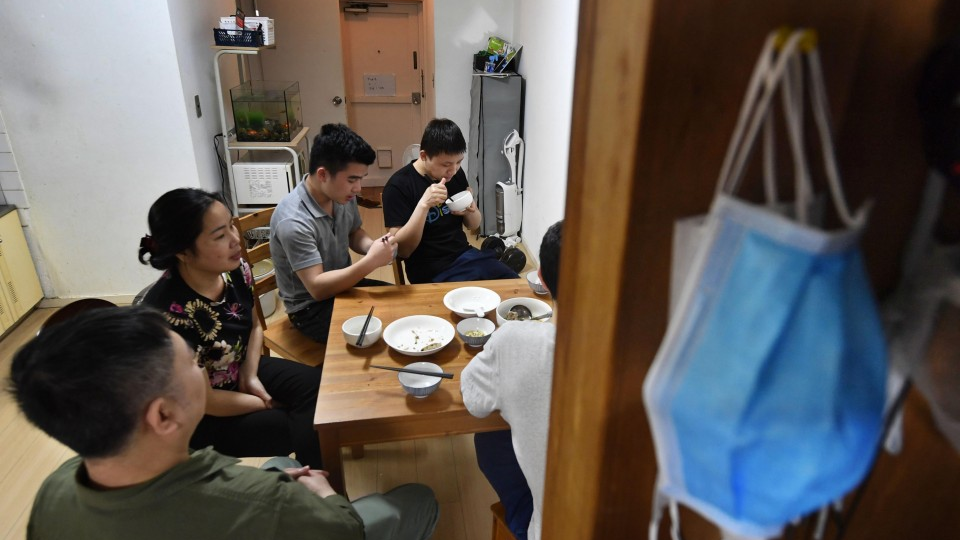 Financially strapped Vietnamese students due to the coronavirus pandemic have supper at a Tokyo temple that is supporting such people on April 24, 2020. The virus-linked economic downturn has led to many foreign technical interns and part-timers being dismissed in Japan. (Kyodo)

"I believe it is important for those who are working in universities to make an appeal so that there is no discrimination," said Maya Hamada, a Kobe University professor, who led the online signature campaign calling for support for all financially struggling students regardless of nationality.

"In a tough period, why are only foreign students being set apart by their academic results and receiving discriminatory treatment different from Japanese students?" said the petition, which received 1,701 signatures in the two weeks through June 9.

"We are concerned that the measure would make students hoping to study in Japan feel the country takes the human rights of foreigners lightly and discriminates against them," it said.

Under the support program, of the around 3.70 million students attending universities, colleges and other educational institutions, 430,000, accounting for just over 10 percent of the total, are eligible to receive the cash handouts.

In addition to the conditions imposed on Japanese students, foreign students must have attained a grade point average of 2.30 or higher in the previous school year, equivalent to the top 25 to 30 percent of students, according to the ministry.

"With many foreign students eventually returning to their home countries, we have set a condition to limit the handouts to promising talent most likely to contribute to Japan in the future," the ministry said last month in explaining the policy.

The tougher condition has sparked criticism because many students from abroad, like their Japanese peers, are facing difficulties paying for tuition and living costs.

Education minister Koichi Hagiuda has said those who do not meet the criteria may still be eligible for the handouts as the government has left the screening of eligible students to each institution.

But Hamada of Kobe University said many institutions are likely to comply with the criteria anyway and it will have an unfavorable effect on places of education.

Some university presidents said they will select recipients of the handouts on their own, without taking the criteria into consideration.

Yoshiaki Terumichi, president of Sophia University in Tokyo, questioned the criteria as the government has been promoting the acceptance of foreign students amid Japan's low birthrate and graying population.

"It is hard to understand what kind of message (the government) is delivering," Terumichi, who serves as a vice president of the Japan Association of Private Universities and Colleges, told reporters earlier this month.

Japan achieved its target of accepting 300,000 students from abroad in fiscal 2019 ended March. In Sophia University, the number of international students totaled 2,718 in fiscal 2018, doubling from fiscal 2013.

Terumichi said the university will not distinguish foreign students from Japanese students, adding he wants the government pay considerable attention to them by implementing special measures for them "in a visible manner."

Such a view is also held by Kyoto City University of Arts President Tamame Akamatsu, who said in a message posed on its website it will support students who apply for the cash handout program regardless of whether they are Japanese or foreign.

"Foreign students are important people, who allow us to learn about the importance of diversity," Akamatsu said. Of the around 1,000 students studying at the arts university, about 60 are from abroad.

A painter herself, Akamatu said she was not an excellent student during her university days and the criteria "should not be a hurdle for the support."