Tomisaku Kawasaki, a pediatrician who discovered a rare inflammatory syndrome affecting young children that was subsequently named after him, has died at a Tokyo hospital, a medical research institute announced Wednesday. He was 95.

The Tokyo native died of old age Friday afternoon, the Japan Kawasaki Disease Research Center said. The syndrome has recently attracted renewed attention with an increasing number of children developing similar symptoms in Europe and the United States, raising concern over a possible link to the new coronavirus.

While treatments for Kawasaki disease have been mostly established, its cause has yet to be determined, with no decisive evidence supporting theories blaming a virus or bacteria. 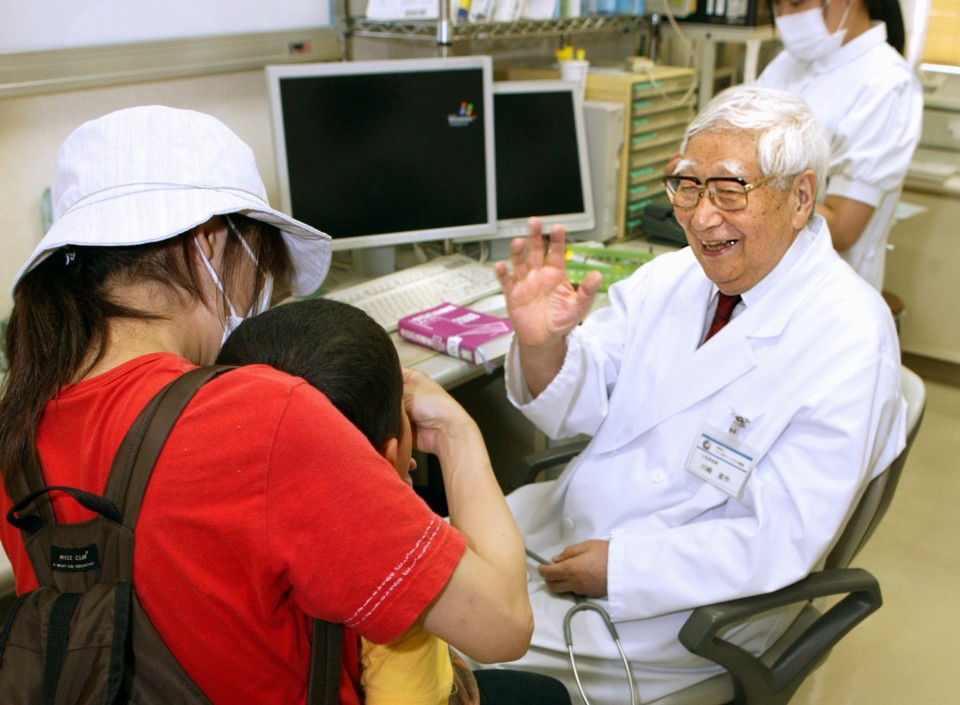 Tomisaku Kawasaki (R), the Japanese doctor who first reported cases of what is now known as Kawasaki disease, is pictured in 2009 at Tsukuba Central Hospital in Ibaraki Prefecture. (Kyodo)

Kawasaki started working as a pediatrician at the predecessor of the Japanese Red Cross Medical Center in Tokyo in 1950 after graduating from the institution that later became Chiba University.

In 1961, he first came in contact with an unknown illness in children characterized by symptoms including high fever, skin rashes, irritation and redness of the whites of the eyes, and a swollen tongue. He then witnessed dozens of cases over the following years.

Kawasaki in 1967 wrote a paper in "Arerugi," a journal of clinical observations on allergies of 50 cases of sufferers under the title, "Acute febrile muco-cutaneous lymph node syndrome in young children with unique digital desquamation," and the disease was later named after him.

The disease most often affects children under 5 years old and can limit blood flow to the heart and cause vascular inflammation as well as myocardial infarction.

After retiring from the Japanese Red Cross Medical Center in 1990, Kawasaki became the head of an organization that was later renamed the Japan Kawasaki Disease Research Center and later served as its chairman and honorary chairman.

He was awarded the Japan Academy Prize for his research on Kawasaki disease in 1991 and also the first Japan Pediatric Society Prize in 2006. He was also honored by the Tokyo metropolitan government for contributions to his field.