Travel from Japan to Vietnam resumed Thursday in a first step after the easing of travel restrictions imposed to fight the novel coronavirus. 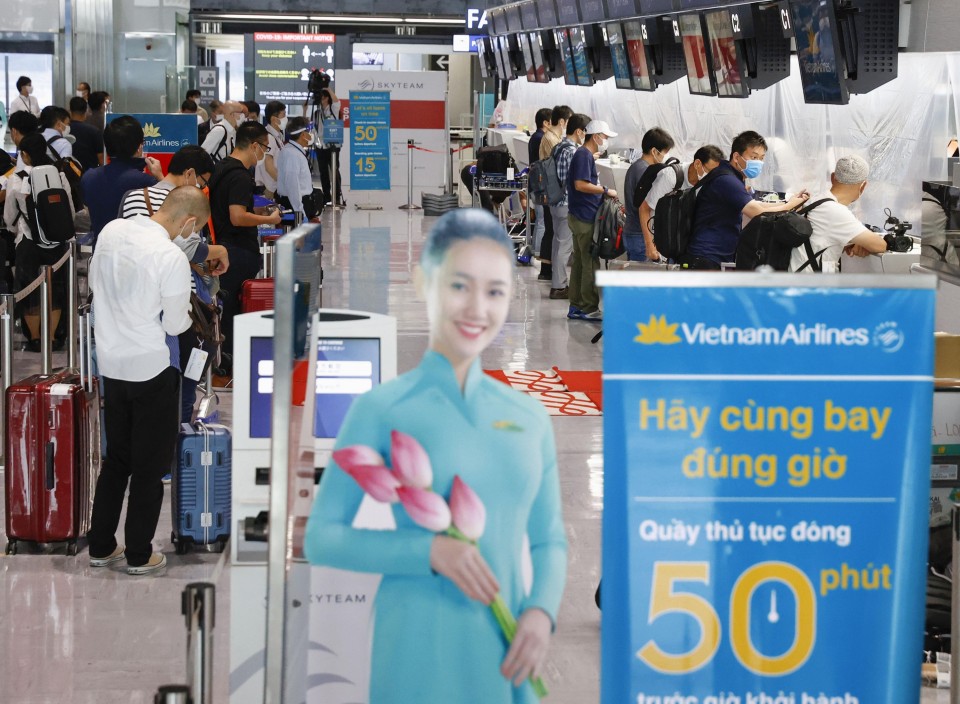 People check in at Narita airport near Tokyo on June 25, 2020, before boarding a chartered flight to Vietnam's Van Done. A total of about 440 businesspeople will travel from Japan to Vietnam on three chartered flights as the first step in easing travel restrictions aimed at stemming the spread of the novel coronavirus. (Kyodo)

"There's a chance that travel conditions will improve, but I wanted to return as soon as possible," said Takako Omi, 50, who works at a Japanese sewing factory in Vietnam. "I'd like our expatriate employees there to take a break."

Omi said she had been unable to fly back after temporarily returning to Japan in March.

Japan and Vietnam have recently agreed to gradually ease restrictions on travel between the two countries.

Vietnam initially did not allow foreign travelers to enter, but has agreed to ease restrictions on the basis of visitors taking a polymerase chain reaction test upon arrival and a two-week quarantine in a hotel, according to the Foreign Ministry.

Check-in counters at the Japanese airport were overflowing with passengers and family members seeing them off. Travelers wore protective clothing designed to prevent the spread of the virus that they were given as they boarded the plane, according to Vietnam Airlines, which operated the flight.

"It seems that the spread of the virus has been stemmed (in Vietnam), but I'm worried about another wave," said a 33-year-old businessman, adding that his job transfer to the country had initially been postponed.

As of earlier this week, Japan had an entry ban in place for 111 countries and regions, with foreign travelers that have been to any of the areas within 14 days of their arrival being turned away. Conversely, 177 countries and regions had imposed restrictions of some kind on entry from Japan, according to the ministry.

Japan is now in talks with Australia, New Zealand and Thailand to mutually ease travel restrictions on the condition that travelers test negative for COVID-19 before departure and upon arrival as well as submit an itinerary detailing where they will visit during their stay.