This year's ornamental square watermelon shipments began Wednesday from the western Japan city of Zentsuji, with the approximately 10,000 yen ($94) fruits ripe and ready for buyers across the country.

Seven growers in the Kagawa Prefecture city plan to ship about 400 cubic watermelons, with sides about 18 centimeters in length, to wholesalers mainly in the Tokyo metropolitan area, Osaka and its surrounding cities by mid-July.

"Due to the effects of the coronavirus this year, I think there are people who are depressed because they have had to stay at home in hot weather," said Toshiyuki Yamashita, 72, one of the producers. "I hope they will have their spirits lifted when they see the square watermelons."

The inedible watermelons were placed in cube-shaped plastic containers for around 10 days while still unripe. The growers said about 80 percent of the total grown are an ideal shape for sale.

A group of farmers in the city began production of the watermelons about 50 years ago in an attempt to raise their community's profile. 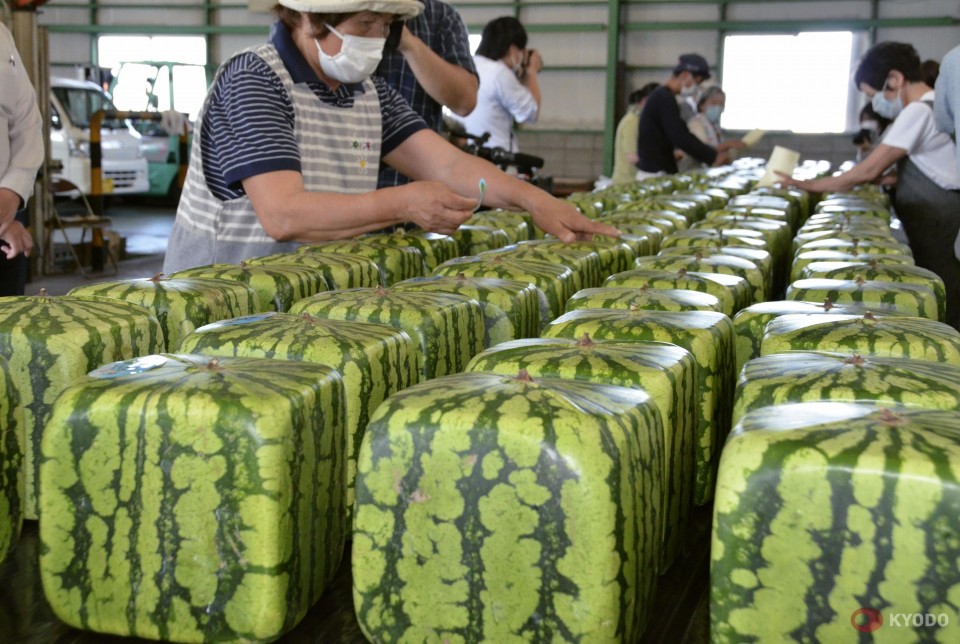 Cube-shaped watermelons are lined up in Zentsuji, Kagawa Prefecture, western Japan, on June 24, 2020, for the season's first shipments. The ornamental watermelons are grown in square plastic containers and they carry a wholesale price of around 10,000 yen ($94) a piece. (Kyodo)