Visitors to a Japanese zoo are playing their part in helping an overweight female African elephant make progress on a diet-and-exercise regime to prepare it for a groundbreaking attempt at artificial insemination.

Mao, 18, gained some 500 kilograms when put on a special feeding program following the death of her mate in November 2018, and zoo officials have been trying to get her to shed weight to increase the chances of success of what will be the nation's first attempt to artificially breed an elephant in captivity. 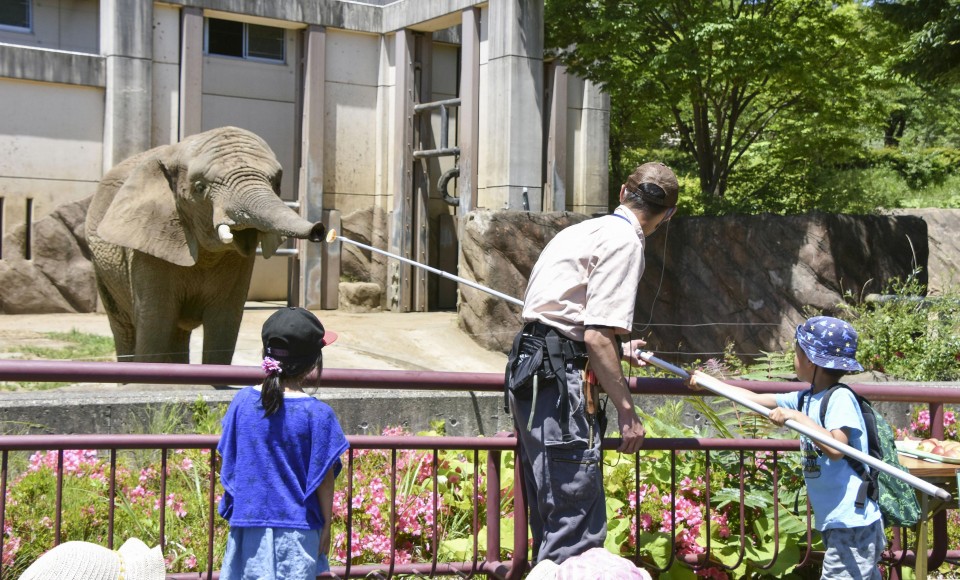 An elephant gets an orange from a visitor at a zoo in Morioka, northeastern Japan, on June 21, 2020. (Kyodo)

Since June 1, visitors to Morioka Zoo in Iwate Prefecture, northeastern Japan, have been helping to get Mao to walk back and forth between both ends of the enclosure by offering food such as bananas and apples on a long pole over the fence. She makes the 60-meter journey up to 15 times a day.

After the death of her mate Taro at the zoo some year and a half ago, Mao initially lost her appetite, but zoo officials responded by giving her higher-calorie food to keep up her weight, resulting in her piling on the kilos.

While it is hoped slimming down will help Mao experience a safe delivery, overdoing it could be harmful, too, the zoo said.

"We will closely monitor Mao's health condition and be creative with a menu and number of feeding times," according to a zoo official.

"I am looking forward to Japan's first elephant baby to be born through artificial insemination," Hiroki Matsumoto, a 44-year-old local dentist, said Sunday as he watched his daughter Iroha, 5, give an apple to the elephant.