The Chinese government has stepped up the number of visas being issued to Japanese citizens after limiting it for months following the coronavirus pandemic, a diplomatic source familiar with bilateral ties said Wednesday.

The move is apparently aimed at bringing business exchanges between the two countries back to normal, the source said, adding China has recently issued visas to Japanese people entering Shanghai and Guangdong Province. 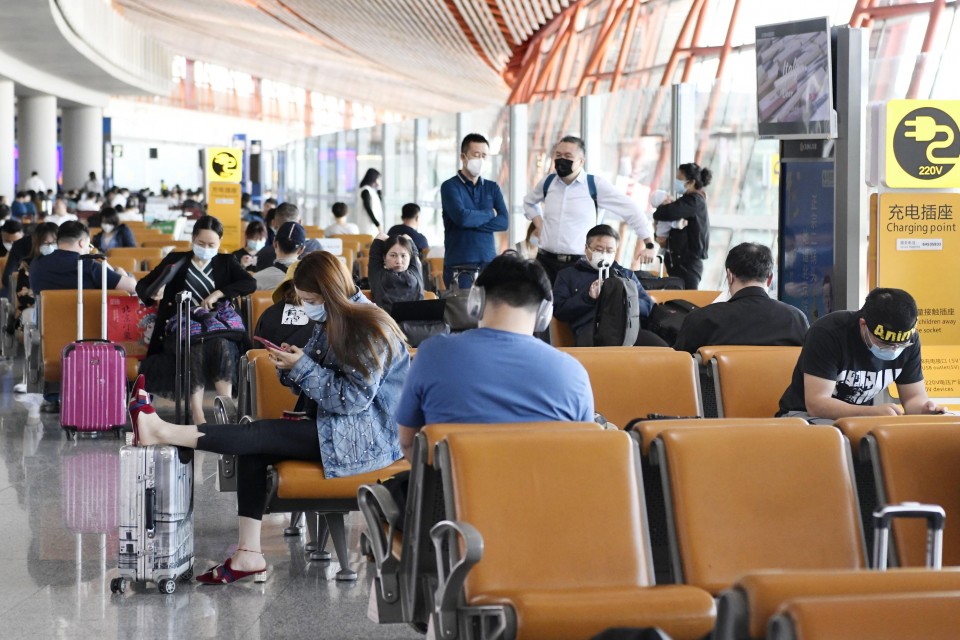 People wait at a boarding area for domestic flights at Beijing Capital International Airport on May 10, 2020. (Kyodo)

In China, most companies have resumed operations with the number of infections decreasing, but many Japanese citizens working in the nation have been stranded in their home country as China has restricted the entry of foreigners for the past two months.

With the absence of Japanese staff affecting operations at Japan-related companies in China, Beijing may start giving preference to Japanese businesspeople when issuing visas to shore up the economy hit hard by the spread of the virus.

But it is expected to take some time for the families of such businesspeople as well as Japanese tourists to be able to enter China, given that flights between the countries are likely to remain limited for the foreseeable future.

A large number of workers and their families went back to Japan for the weeklong Lunar New Year holidays that began Jan. 24 and extended their stays to evaluate the situation as fears about the outbreak in China lingered in February.

In late March, the Chinese Foreign Ministry abruptly announced that it would temporarily stop allowing foreigners to enter the nation to prevent imported infection cases. The measure applies even to those who hold a valid visa or residence permit.

Applications for business visas and some specific cases, however, have been permitted amid the travel ban.

Late last month, around 140 Japanese who had been evacuated from the central Chinese city of Wuhan earlier this year in the wake of the virus's spread returned on a chartered plane to the original epicenter of the epidemic.

China has already started allowing South Korean businesspeople who meet certain conditions to enter the country to ensure the smooth running of supply chains, which were seriously disrupted amid the pandemic.

Beijing has also said that it will resume traffic with Singapore for business purposes.

Japan has so far avoided an explosive surge of virus infections, with more than 17,600 cases and about 900 deaths reported across the country. The tally includes around 700 infections from the Diamond Princess cruise ship that was quarantined off Yokohama in February.

On May 25, Japan completely lifted its state of emergency over the coronavirus crisis.

In China, the increase in infections peaked in late February. The virus, which causes the respiratory disease COVID-19, has sickened over 83,000 people in the mainland and killed more than 4,600, the nation's health authorities said.