Japan extends state of emergency over coronavirus until May 31

Prime Minister Shinzo Abe on Monday extended the nationwide state of emergency until the end of May to reduce new coronavirus infections in Japan amid nascent signs of the epidemic leveling off.

Abe said extending the state of emergency that was due to expire Wednesday was necessary to remove some of the strain on hospitals overcrowded with COVID-19 patients and sought continued cooperation.

But he acknowledged that "strict curbs" on social and economic activities cannot last long, saying "new lifestyles" should be adopted without lowering the guard against the virus in gradually returning to normalcy.

"The one-month period is designed for us to prepare for the next step and put an end to the state of emergency," Abe said during a televised press conference. 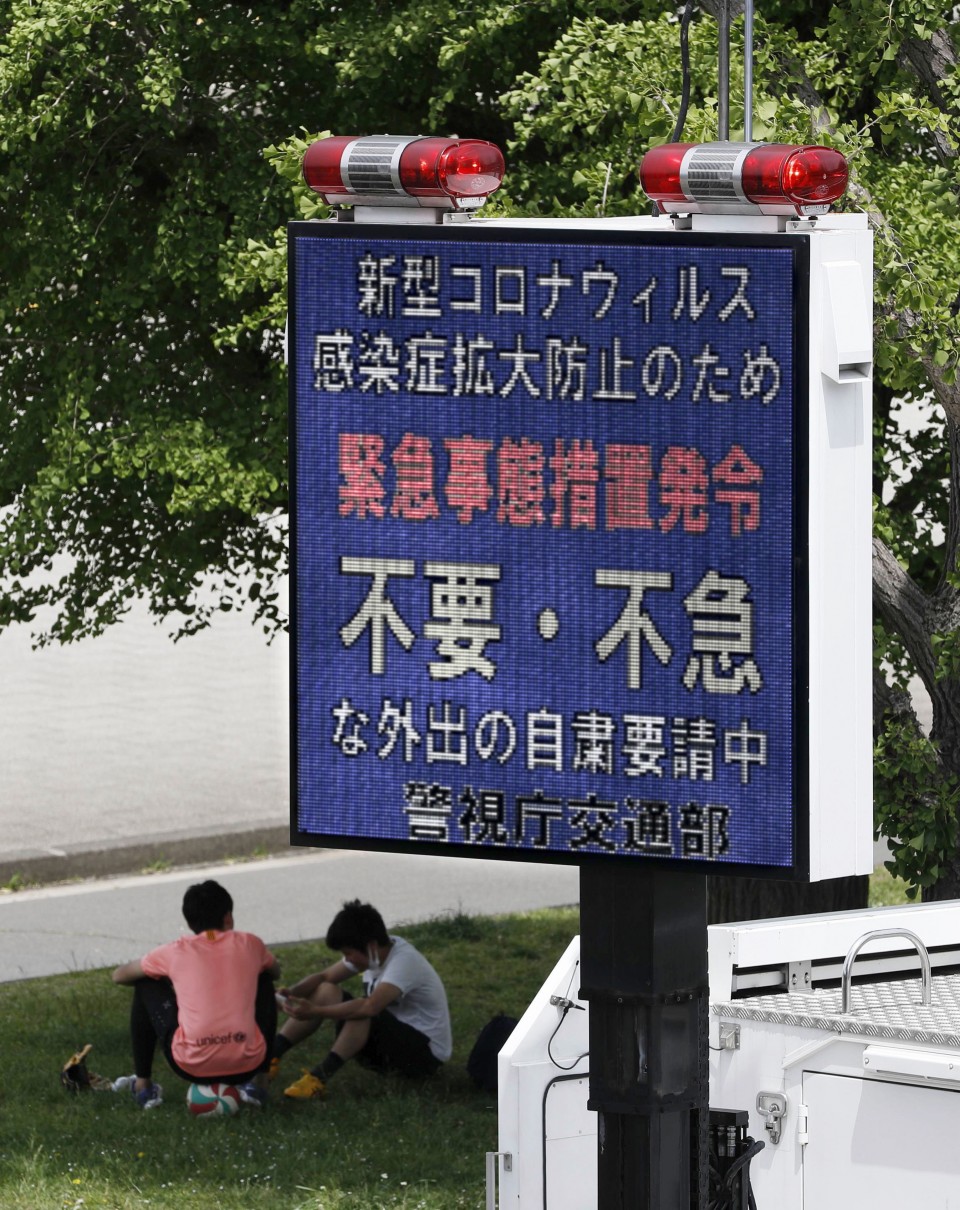 (Photo taken May 3, 2020, in Tokyo, shows a signboard asking people to refrain from nonessential outings amid the coronavirus pandemic.)

Under the state of emergency, people still need to refrain from crossing prefectural borders and going to nightclubs or live music venues to lower the risk of group transmission. Abe reiterated his call for an 80 percent cut in person-to-person contact in 13 prefectures such as Tokyo and Osaka that require "special caution."

"I'm not saying that going out is bad," Abe said as long as the "3 Cs" -- confined spaces, crowded places and close contact -- are avoided.

Japan's state of emergency does not mean hard lockdowns, and necessary outings such as grocery shopping, hospital visits and going for walks or jogging have been allowed.

Over the past month, economic activity has been depressed due to stay-at-home and business closure requests under the emergency declaration.

While the state of emergency remains in force nationwide, some of the current constraints on social and economic activities will be eased in prefectures where the infection situation does not need special caution.

The reopening of parks, libraries and museums, will be permitted across the country on condition that preventive steps against the virus are taken.

The government will release guidelines in the next few weeks on virus prevention steps for businesses to resume operations.

As coronavirus-forced closures continue, Abe said he will work to make sure children can return to school even "in stages" as the academic year normally starts in April.

A panel of medical experts tasked with assessing the infection situation gave an idea of what "new lifestyles" would look like. Its recommendations start from the basics such as washing hands and wearing masks to keeping a physical distance of 2 meters and avoiding face-to-face conversations.

The panel is promoting the use of electronic money, which may be difficult in cash-dependent Japan, as well as in-house meetings and business card exchanges online to reduce transmission risks. 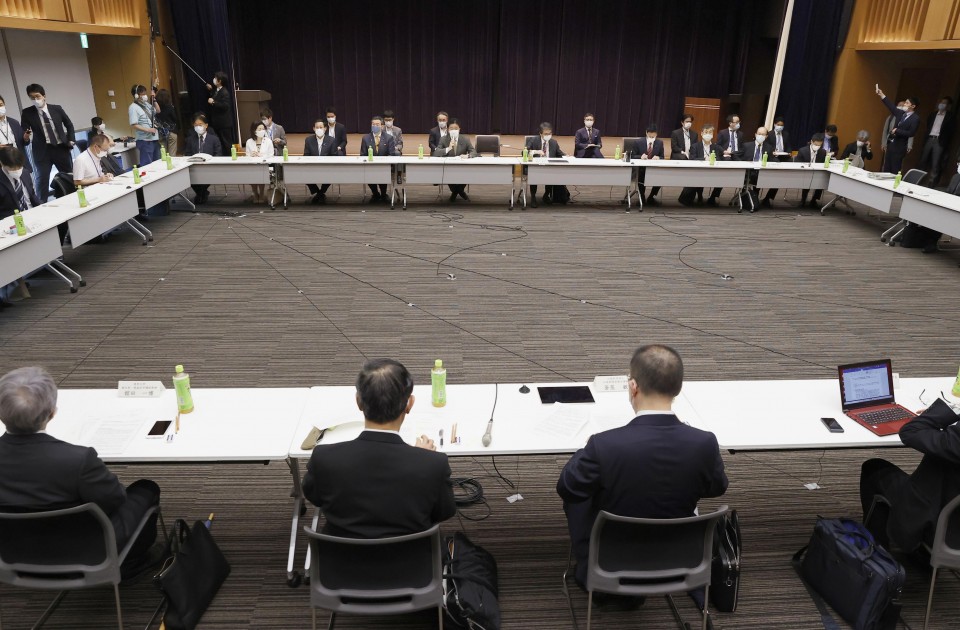 (A coronavirus task force meeting is held in Tokyo on May 4, 2020. Prime Minister Shinzo Abe is scheduled to hold a press conference later in the day to announce the government's decision to extend its national emergency until the end of the month to contain the spread of the new coronavirus.)

In Monday's press conference, Abe said the experts will make a fresh assessment on the infection situation around May 14 and the state of emergency could be lifted before the end of the month depending on the outcome.

He described the extension beyond Wednesday -- the last day of Japan's Golden Week holiday period -- as "gut-wrenching" and apologized for failing to meet the deadline.

"Unfortunately, I had to extend it by one month. I'm keenly aware of my responsibility as prime minister," Abe said.

As Japan braces for a protracted battle against COVID-19, Abe has stressed the need to develop treatment drugs and vaccines swiftly.

Abe said he hopes to see the use of the anti-flu drug Avigan approved for COVID-19 patients in Japan as the government is also set to fast-track its authorization process for the experimental antiviral drug remdesivir.

The extension came after the government panel of medical experts recommended Friday that the emergency steps be kept in place for a while to prevent a surge in new infections that would put an additional strain on hospitals.

Abe declared a monthlong state of emergency on April 7 for seven prefectures covering urban areas including Tokyo, Osaka and Fukuoka. He expanded it to the entire nation on April 16 to pre-empt an expected increase in travel during the roughly weeklong holiday period when many Japanese normally visit their hometowns or go on trips.

To mitigate the damage done to households, he timed the announcement with a pledge to provide each of Japan's some 126 million people with 100,000 yen ($930) to help ride out the emergency situation.

Based on a legal change in mid-March, a state of emergency is declared when it is feared the country's capacity to provide medical care will reach its limit unless measures are taken.

They can also requisition medical supplies and food from companies that refuse to sell them and punish those that hoard or do not comply.

Stay-at-home and business suspension requests are not mandatory and there are no legal penalties for noncompliance with them.

Still, prefectural governors have urged Abe to extend the emergency declaration, though its limits have become clear. Some governors recently released the names of pachinko parlors that defied their closure requests.

Tokyo Gov. Yuriko Koike has argued that prefectural governments should be given more discretion in deciding what steps to take as she, along with Osaka Gov. Hirofumi Yoshimura, have stressed the need to consider how to exit from emergency mode.