Okinawa marked on Friday the 48th anniversary of its reversion to Japan from U.S. control, as protests over the burden of hosting American military facilities on the southern Japanese island were canceled due to the coronavirus pandemic.

While Japan restored its sovereignty after defeat in World War II based on the 1952 San Francisco Peace Treaty, Okinawa reverted to Japanese rule on May 15, 1972, but with a large portion of its land still occupied by U.S. military bases.

Okinawa Gov. Denny Tamaki said in a press conference, "I will completely devote myself to resolving issues (in Okinawa) including heavy burden (of hosting U.S. bases)."

Despite only representing 0.6 percent of the country's land, Okinawa accounts for around 70 percent of total acreage exclusively used by U.S. military facilities in Japan. 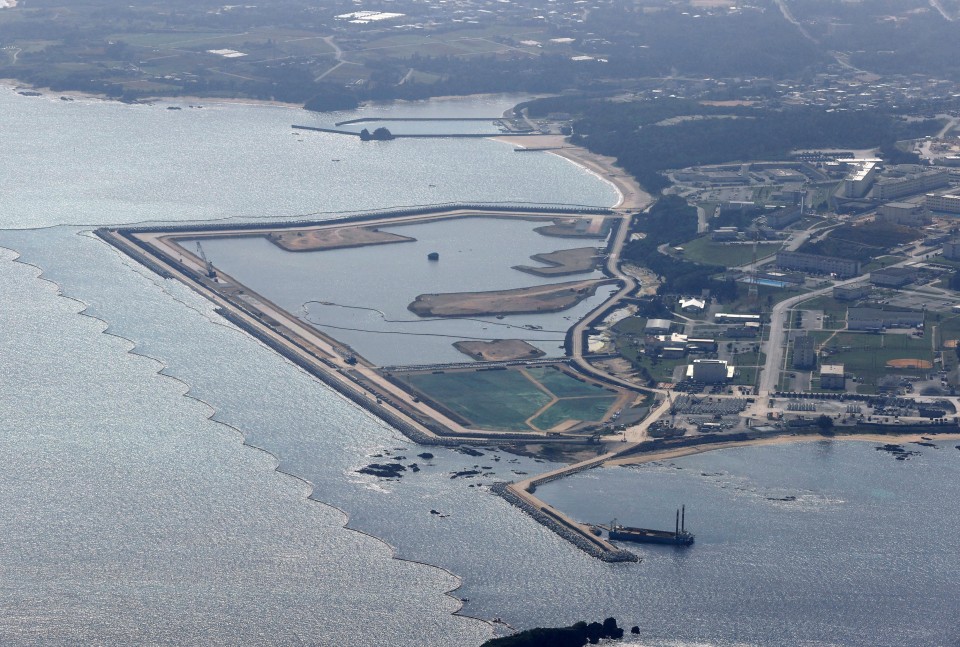 (View of the relocation site for the U.S. Marine Corps Futenma Air Station in Nago, Okinawa Prefecture, as seen from a Kyodo News helicopter on April 17, 2020.)

For the planned relocation of U.S. Marine Corps Air Station Futenma within Okinawa Prefecture -- from the crowded residential area of Ginowan to the less densely populated coastal district of Henoko, in Nago -- land reclamation has been under way despite strong opposition from local residents.

The proposed move has resulted in a legal battle between the state and the prefecture.

"It was a gut-wrenching decision (to cancel a protest march) when relations between the central government and Okinawa turn even more chaotic," said Hiroji Yamashiro, a prominent anti-U.S. military base activist in the prefecture.

"We will not allow the deterioration of (the situation surrounding the base) and must join hands with people on the mainland (to achieve this)," said Yamashiro, head of the Okinawa Peace Action Center.

The annual "Peace March" and other events usually held on the reversion anniversary were canceled as part of efforts to stem the spread of the pneumonia-causing virus. Okinawa has reported about 140 COVID-19 cases.

In late April, central government sought approval from Okinawa's prefectural government for changes to the Henoko construction plan as an area of soft ground which would require additional reinforcement work has been found off the coast, triggering strong opposition from locals.