The government target to have cloth face masks dubbed "Abenomasks" delivered to all remaining households by the end of the month will not be met, a health ministry official said Thursday.

Delivery of the reusable cloth masks, which derive their moniker from a pun on Prime Minister Shinzo Abe's signature economic policy mix known as "Abenomics," is now expected to be completed in mid-June, the official said.

Conceived as an initiative to help contain the spread of the novel coronavirus, the remaining masks will be delivered after the nationwide state of emergency was lifted earlier this week.

Ridiculed on social media, Abe's mask initiative has been questioned by critics for its cost and effectiveness and has also drawn complaints after some masks were found to be tainted.

The government was set to wrap up delivery of around 130 million cloth masks -- two per household -- by the end of May, but suppliers had to recall some of them after defects were found.

"We strengthened inspections of the products and this has delayed our initial schedule (of completing the delivery)," Manabu Yoshida, head of the Ministry of Health, Labor and Welfare's health policy bureau, told an upper house committee. 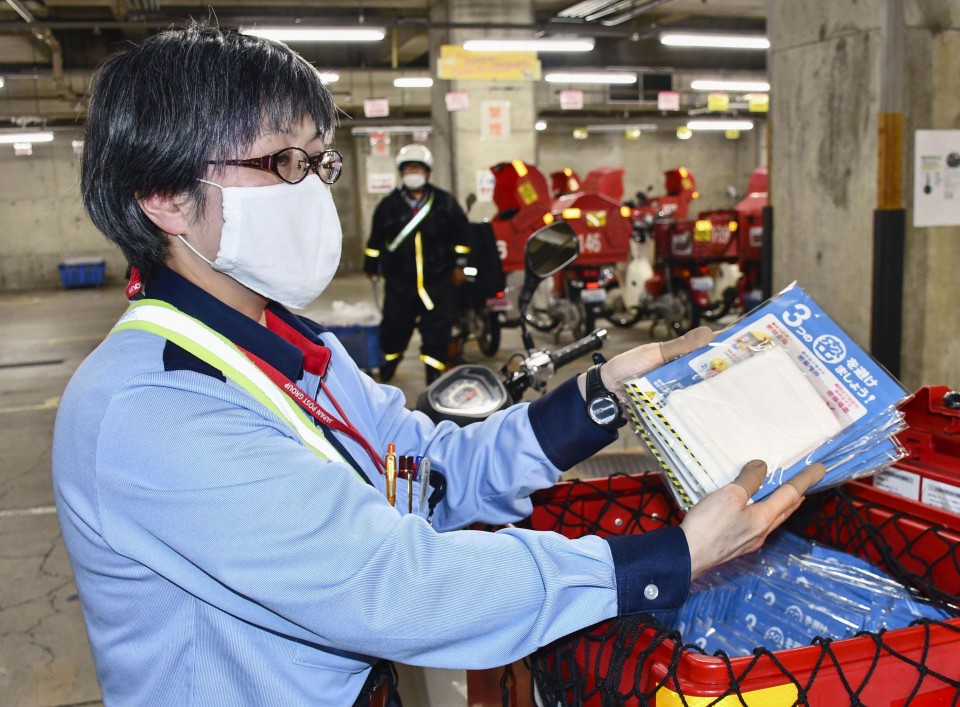 (A post office worker prepares to deliver cloth masks in Kanazawa, central Japan, on May 16, 2020, amid the outbreak of the new coronavirus. The Japanese government plans to distribute two cloth masks to all households by mail)

"Abenomasks" only received by Tokyo residents despite virus emergency

After reports of problems found with cloth masks that were delivered first to pregnant women eventually led to a recall, the government bolstered quality checks.

The Abe administration has faced criticism for spending 800 million yen ($7.42 million) to inspect the recalled masks, in addition to the 46.6 billion yen originally used for the project. The ministry later corrected the figure for inspection costs to 8 million yen.

Abe's mask initiative has been hit by other complaints, including that the masks are too small, and that delivering two to each household is not particularly helpful for large families.

While critics remain skeptical about the effectiveness of the program, government officials have claimed the distribution of cloth masks was meant to curb demand for disposable ones and helped cut rising prices amid shortages.

Abe himself has been wearing the mask, but other members of his Cabinet, including health minister Katsunobu Kato, wear masks of their own choice.

Disposable face masks were in short supply earlier this year as the coronavirus spread, but they have recently returned to the shelves in drugstores and convenience stores.