The Australian government on Friday announced a three-step plan to gradually ease coronavirus restrictions, with the aim of completely reopening the economy by July.

Prime Minister Scott Morrison said it is estimated that the plan, which will be revised every three weeks in coordination with state and territory leaders, will restore around 850,000 jobs. 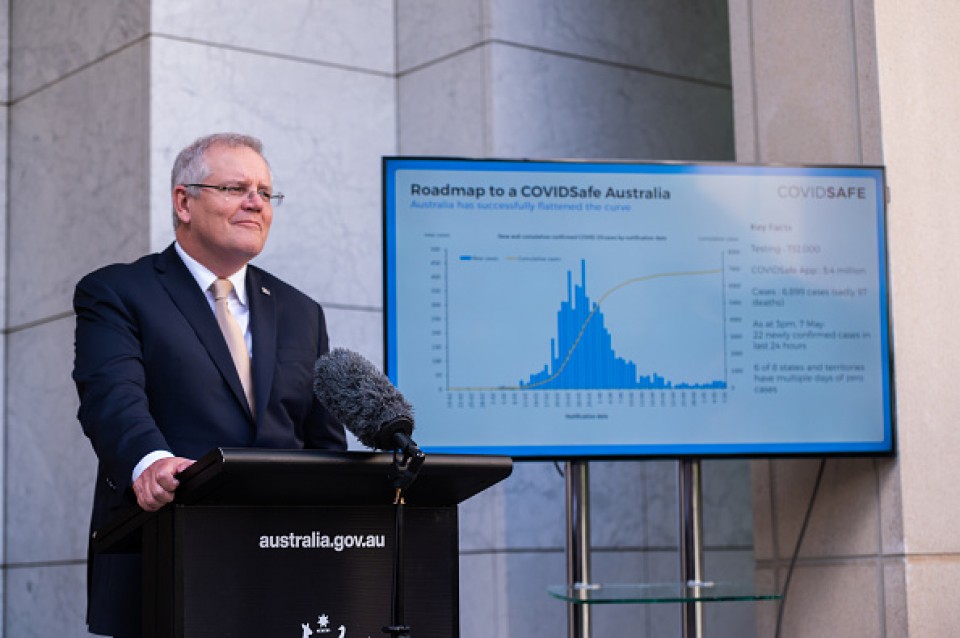 (Prime Minister Scott Morrison speaks during a press conference following a National Cabinet meeting on May 8, 2020 in Canberra, Australia.)[Getty/Kyodo]

"This is the plan...that will get us back where we need to be, as quickly as we can," Morrison said at a press conference in Canberra.

Under step one, restaurants and libraries will be able to reopen and people will be able to gather in groups of 10 in public spaces, under the direction of local state and territory governments.

While domestic travel is planned to resume in July, Morrison said there was nothing to indicate a return to international travel "in the foreseeable future," with the exception of a potential quarantine-free travel zone between Australia and New Zealand.

In mid-March, Australia introduced strict social distancing policies, including closing its borders and restricting all food service to takeout only.

While the swift measures have helped Canberra successfully control the spread of the virus, the Australian Bureau of Statistics estimates 1 million people lost their jobs as a result, with hospitality workers particularly hard hit.

The Reserve Bank of Australia said Friday that it predicts unemployment will peak at 10 percent as a result of the coronavirus pandemic, with a decline in gross domestic product of around 10 percent over the first half of 2020.

Australia has confirmed roughly 6,900 cases of COVID-19, the respiratory illness caused by the virus, and 97 deaths.