A 91-year-old South Korean woman who was forced to work in the Japanese military's wartime brothels has criticized weekly protest rallies in front of the Japanese Embassy in Seoul, saying they preach hatred to young participants.

Lee Yong Soo's accusation, made at a press conference on Thursday, marks a rare moment of dissent among veteran participants in the rallies that have been held 1,438 times every Wednesday since January 1992.

Together with a civic group that has organized the rallies and supported the so-called comfort women, Lee has spent years demanding an apology and compensation from the Japanese government. 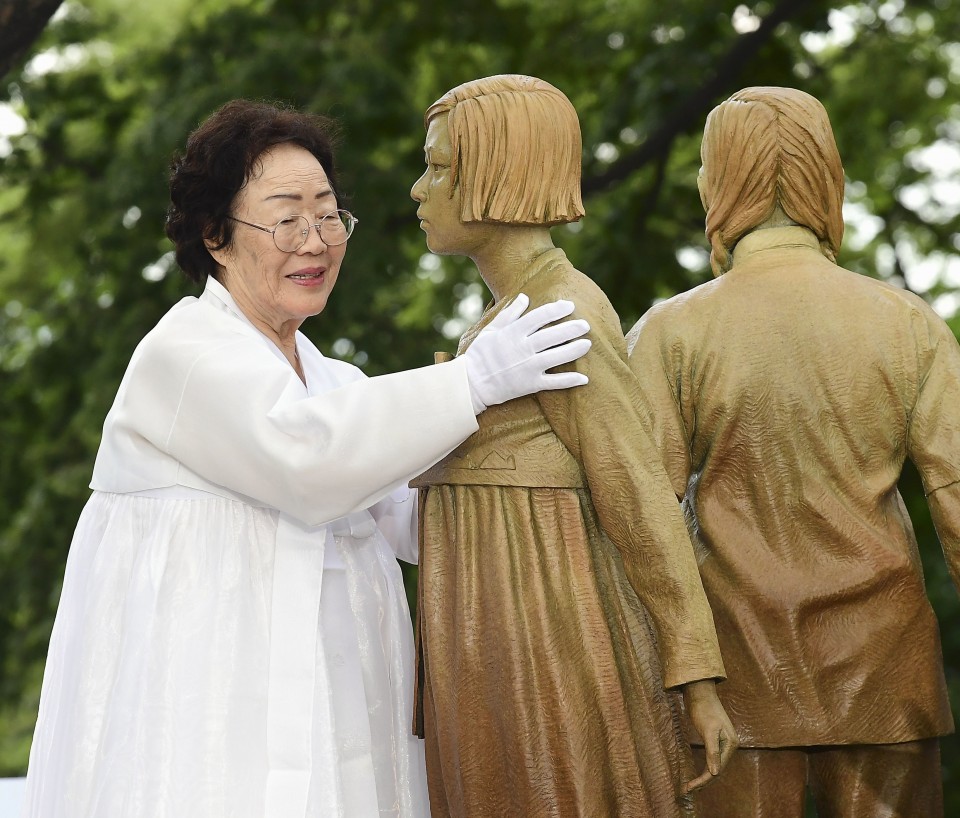 (Lee Yong Soo touches, in August 2019, a memorial statue in Seoul symbolizing women like her, forced to work in the Japanese military's wartime brothels.)

The dispute over comfort women -- a euphemism used in referring to those recruited mostly from Asian countries to provide sex to Japanese soldiers during World War II -- has been one of the major issues that have strained ties between Japan and South Korea.

At Thursday's press conference in the southeastern city of Daegu, the nonagenarian accused the group, the Korean Council for Justice and Remembrance for the Issues of Military Sexual Slavery by Japan, of not using in a transparent manner donations collected from the public.

Lee also said she will no longer attend the weekly rallies, which draw many students from middle school through university, among other participants, and that the gatherings should end.

"The rallies only teach young students hatred," she said, adding that young generations of South Koreans and Japanese should interact more and become friendly to each other.

She also criticized Yoon Mi Hyang, former head of the group, for becoming a lawmaker after successfully running in the April 15 general election as a ruling party-affiliated candidate.

Her pointed criticism of Yoon may suggest some internal division within the group after the 55-year-old activist sought to enter politics.

On Friday, Yoon wrote on her social media account that all the donations collected by the group were subjected to thorough oversight and were used properly. She also emphasized the importance of the weekly rallies.

The civic group separately released a statement on Friday saying it was regrettable that there was some misunderstanding between the group and former comfort women.

"We will use this as a chance to look back on our movements during the past 30 years where we tried our best to be together with the victims as family and colleagues," the group said, pledging to work harder to help settle the comfort women issue with Japan and restore the women's rights and honor.