Tokyo Gov. Yuriko Koike unveiled Friday a road map for the easing of measures aimed at overcoming the spread of the novel coronavirus in the capital, as Japan has recently been seeing a decrease in new infections.

The metropolitan government set seven numerical targets, including seeing fewer than 20 new daily cases of COVID-19 on average in a week, and a decline in the proportion of unknown transmission routes to under 50 percent, Koike said at a press conference.

Koike released an outline of the road map a day after Prime Minister Shinzo Abe lifted a state of emergency for most prefectures outside the Tokyo and Osaka regions.

"By taking careful steps, we will attempt to strike a balance in protecting our residents' lives with (the city's) economic and social activities," said Koike.

She also urged residents not to let their guard down along with the lifting of the measures for 39 prefectures. "I would like to ask all please not to forget that Tokyo is still in the midst of a crisis of (new coronavirus) infections spreading." 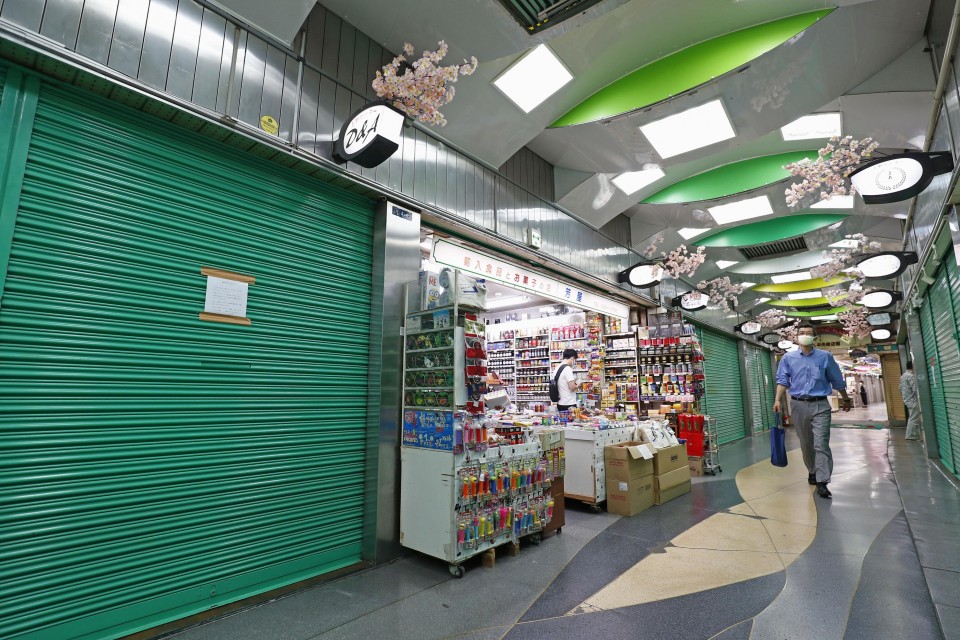 (The Ameyoko shopping area in Tokyo's Ueno is deserted on May 15, 2020, as the capital remains under the state of emergency put in place by the central government to control the spread of the new coronavirus.)

Koike said the details of the road map will be formally decided next week or later, after hearing from municipalities and industry bodies.

The central government has similarly set criteria for ending the state of emergency, under which the number of people infected with the virus would have to be fewer than 70 in one week in Tokyo, which has a population of roughly 14 million.

The metropolitan government on Friday confirmed nine new cases, falling below 10 for the first time since March 22 and bringing the total number of infections to 5,036 people.

With the extension of the state of emergency until May 31, residents in the Tokyo metropolitan area also encompassing Chiba, Kanagawa and Saitama, and Hokkaido, as well as Kyoto, Osaka and Hyogo prefectures, are requested to stay at home as much as possible.

Under such circumstances, some businesses, including movie theaters, sports gyms and bars, have been asked to suspend operations temporarily.

Tokyo is now planning to reduce the scope of the request in three steps, first allowing the resumption of public facilities such as museums and libraries.

They are to be followed by theaters and other facilities with a low risk of people gathering and having close contact in closed settings. After that, all other facilities will resume operations, except those considered to be a high-risk environment.

Tokyo has been hit hardest by the virus among the country's 47 prefectures, but it has seen new cases fall to double-digit levels in recent days after the daily count surged to 266 on April 9.

The average daily count of new cases for the last seven days has been around 21.

It is not expected to lift or ease restrictions until June after the state of emergency expires at the end of this month.

Koike said she plans to issue what she called a "Tokyo alert" when new cases increase again, and that business suspensions will be requested if the number continues to be over 50 or more a day.