President Donald Trump on Tuesday suggested that the United States will take action against China this week over its move to enact a national security law that is feared will curtail Hong Kong's autonomy and civil liberties.

"We're doing something now. I think you'll find it very interesting, but I won't be talking about it today. I'll be talking about it over the next couple of days," Trump said at a press conference when asked about his response to the Hong Kong issue.

Asked if the step includes sanctions, he said, "No, it's something you're going to be hearing about before the end of the week, very powerfully I think." 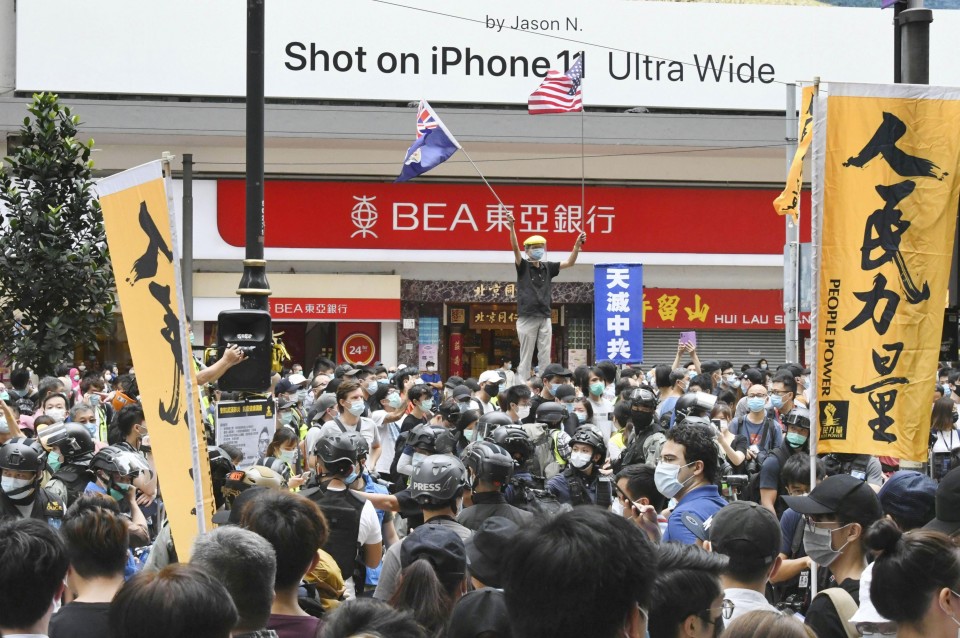 Demonstrators gather in the Causeway Bay district in Hong Kong on May 24, 2020, to protest plans by China to implement a controversial national security law in the former British territory. (Kyodo)

Earlier in the day, White House Press Secretary Kayleigh McEnany said that Trump told her that he is "displeased" with China's efforts to introduce the new law in Hong Kong and that "it's hard to see how Hong Kong can remain a financial hub if China takes over."

Under the "one country, two systems" framework, Hong Kong was promised it would enjoy the rights and freedoms of a semi-autonomous region following the former British colony's return to Chinese rule in 1997.

Hong Kong remains a diplomatic flash point between the United States and China, with Washington urging Beijing to respect Hong Kong's high degree of autonomy and civil liberties, which are key to preserving the territory's special trade status under U.S. law.

Any change in the status could also be a blow to China, which has benefited from using the territory as a gateway to global financial markets.

China has said strong measures are needed to prevent, curtail and punish activities of separation, subversion, infiltration and sabotage in Hong Kong.

The National People's Congress is expected to pass a resolution regarding the introduction of the law on Thursday, the last day of its annual session in Beijing.