A Japanese cooking school has been enticing vegans confined to their homes during the ongoing coronavirus pandemic to try out their unique animal product-free educational offerings.

Instructors at the Vegan-Vegetarian Japanese Cooking Class Society launched online lessons in April to allow people who are stuck in isolation abroad and in Japan to experience the joys of cooking, with virtual demonstrations of how to prepare Japanese-style vegan dishes.

"We have received many requests about online courses since March when the number of foreign tourists visiting Japan fell sharply due to the virus outbreak and people around the world had to stay home," said Akiko Sugawara, 41, chief executive officer and head chef of the school, known as BentoYa Cooking.

The school, based in Yokohama, began targeting foreigners both inside and outside Japan in 2018 for on-site lessons, showing them how to cook Japanese dishes made from plant-based ingredients to take advantage of a boom in vegetarianism and veganism and an increasing number of people eating with dietary restrictions in mind. 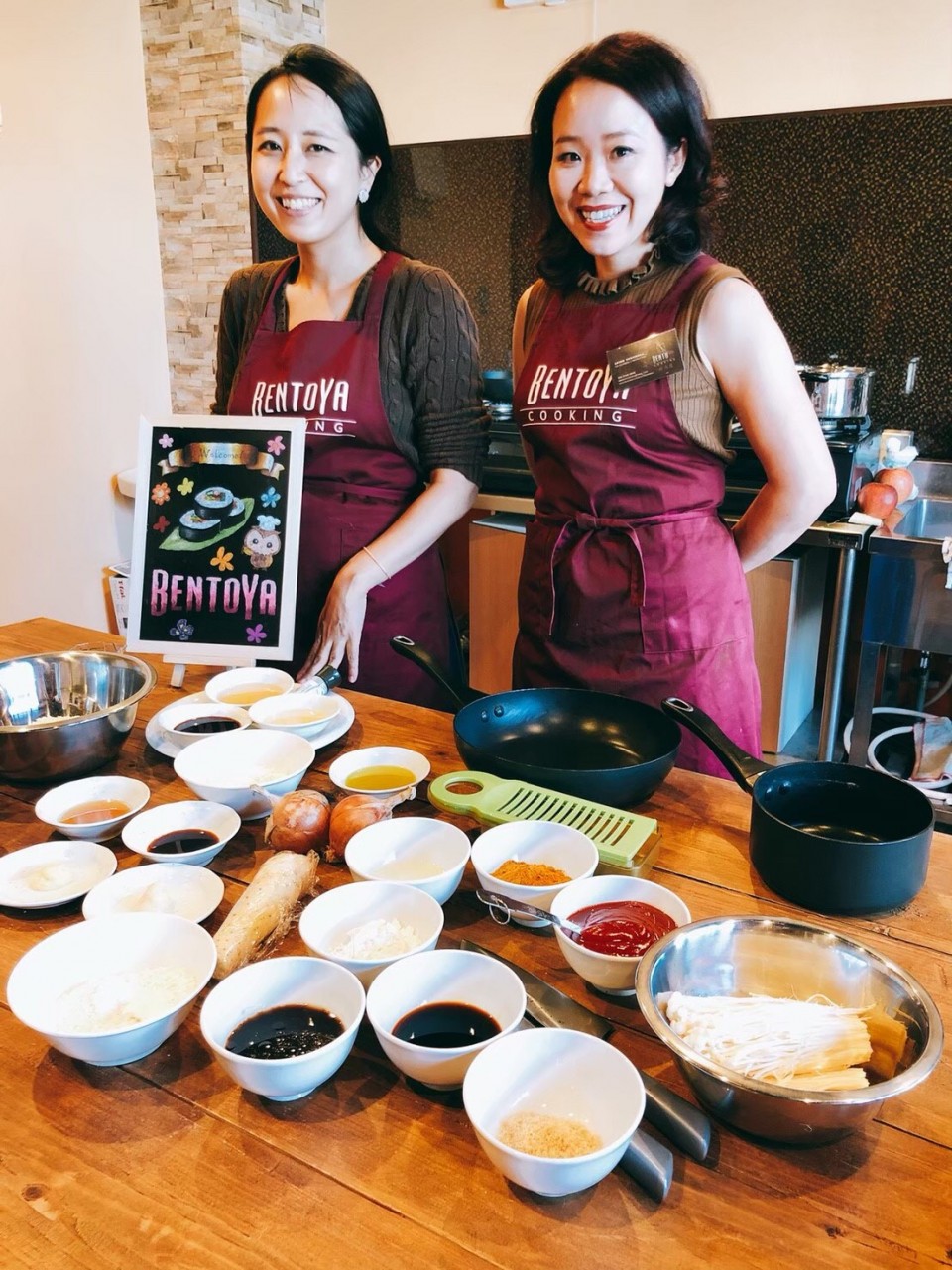 But the pandemic has presented an opportunity for the cooking school to go virtual. The online courses usually run for about an hour and are conducted in English since nearly 90 percent of students are non-Japanese.

Those who take the courses can learn how to cook typical Japanese cuisine like sushi, ramen noodles and gyoza dumplings -- minus the meat or fish.

They are also taught how to make miso fermented soybean paste from "okara," the leftover fiber-rich by-product from the tofu production process that remains when soymilk is made.

As plant-based ingredients have a long shelf life, they are gaining popularity from people around the world who are trying to limit the number of times they venture out to grocers to buy fresh foods due to the virus risks.

Add the extra benefit to immunity that is said to come from consuming fermented seasonings used and it is a win-win for students, the school said.

"We have had about 30 students taking online classes," said Rina Ikeda, an employee of Japan's e-commerce giant Rakuten Inc. who instructs cooking classes on weekends. 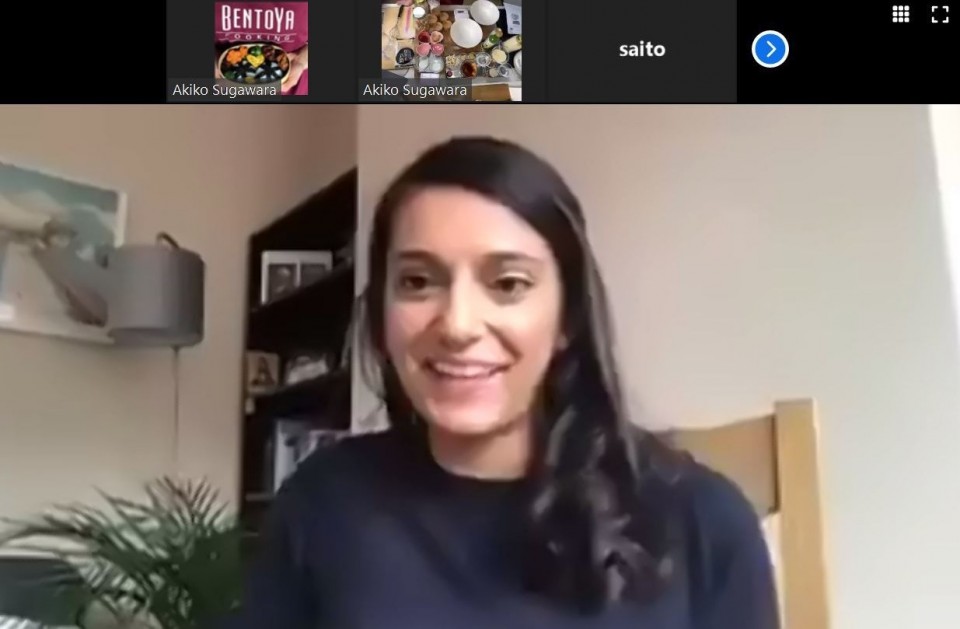 "Regardless of whether or not we help slow the spread of the virus, the courses will continue as long as we receive applications," Ikeda, 31, told Kyodo News.

Ikeda said she used to teach Japanese cooking to international students in Japan when she was a college student. At the time, many students were not able to enjoy Japanese cuisine in the absence of the availability of Halal or vegetarian foods.

Of those participating in the online classes, 60 percent live abroad while over 20 percent are foreign residents of Japan.

Students pay 2,000 yen ($19) per lesson and a portion of the proceeds go to Katariba, a Tokyo-based nonprofit organization that provides educational support to teenagers experiencing financial difficulties in this time of crisis.

"We would like to support people who are in trouble due to the coronavirus," Ikeda said.

"I'm really happy I had made the decision," Kaur said, who has taken four of the cooking classes.

Despite having to maintain social distancing in Britain, "It's nice to make contact with somebody who lives in Japan and stay connected with different people," the 37-year-old said in a video chat following her cooking class. 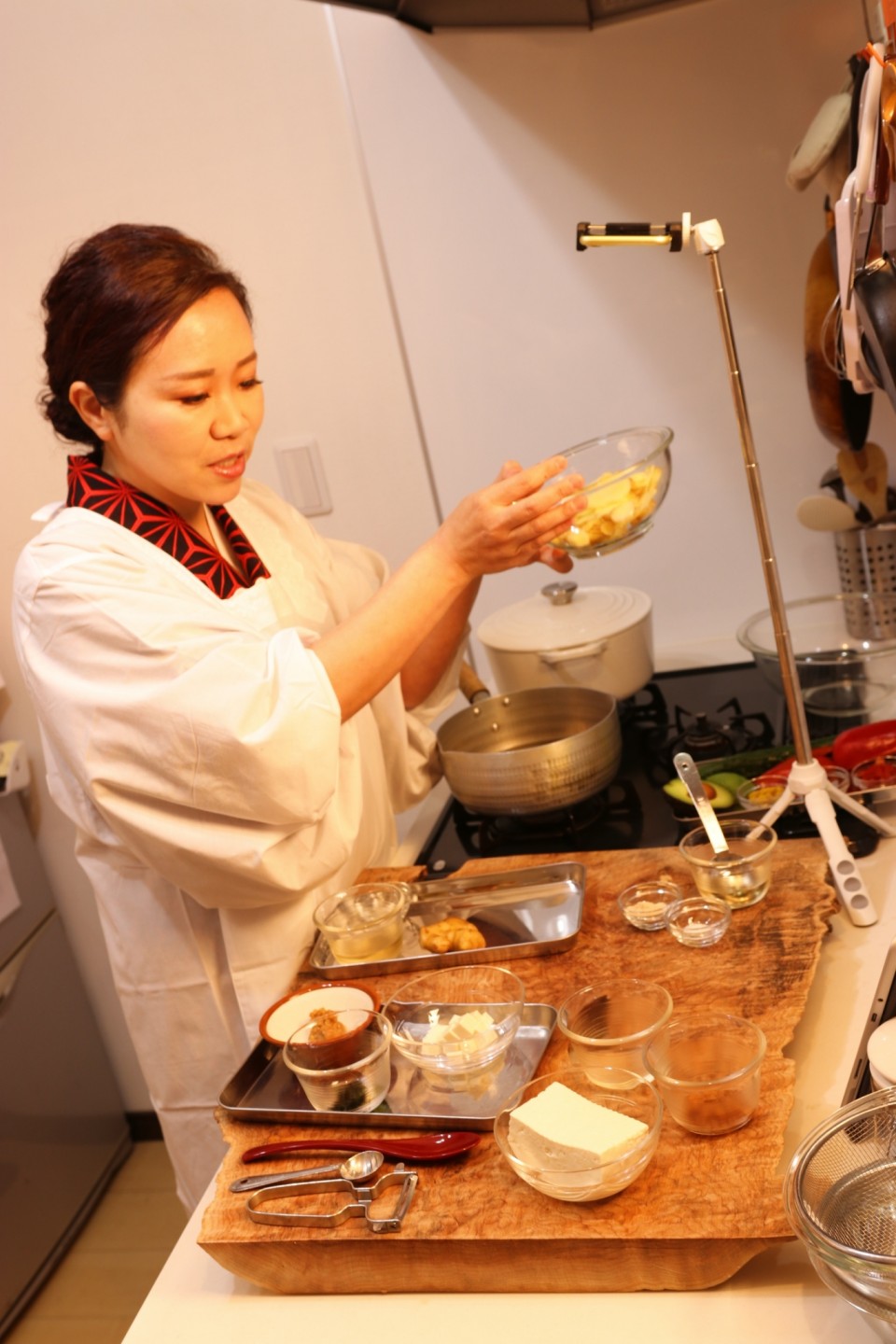 The cooking school plans to invite professional chefs in Japan and abroad to teach "shojin ryori," the Buddhist vegetarian cuisine, from mid-May.

The decision was made to give chefs whose incomes have taken a hit a way to earn money with restaurants forced to shut temporarily amid the outbreak.

"I think the effects of the coronavirus will be prolonged, and we hope to contribute in some way with the online classes, through which we can teach cooking to anyone, regardless of where they live in the world," Sugawara said.

Sugawara, who lived in Canada for over 10 years and ran a Japanese food catering company there, also said the pandemic has provided an opportunity for Japan, which lags behind the West when it comes to providing for vegans or vegetarians, to mark its place on the map.

"I hope vegan Japanese food will be able to spread around the world," she said.