Families gather at a community hall where volunteers serve meals for the disadvantaged. Here and there laughter can be heard, the smiles of diners proving contagious -- a scene typical at Japan's many children's cafeterias.

But with the outbreak of the new coronavirus, previously unimaginable social distancing practices have forced many such cafeterias to shutter temporarily or to look for different ways to provide their low-cost or free meals to those that need them the most, especially during the current crisis.

This cafeteria, one in the network of independent providers known as "kodomo shokudo" in Japan, is managed by Shoko Momma.

Operating since 2016 in the northeastern Japan city of Sendai, the Sendai Kodomo Shokudo normally provides dinner on two Sundays of every month for 10 to 40 diners. When they last met in mid-February, however, they did not expect their next gathering would be months away.

Momma said a bad situation after Prime Minister Shinzo Abe made his bolt-from-the-blue request in late February that schools nationwide close temporarily -- meaning kids did not have access to school lunches -- was made worse because the children's cafeterias could not step into the breach with the declaration of an emergency. 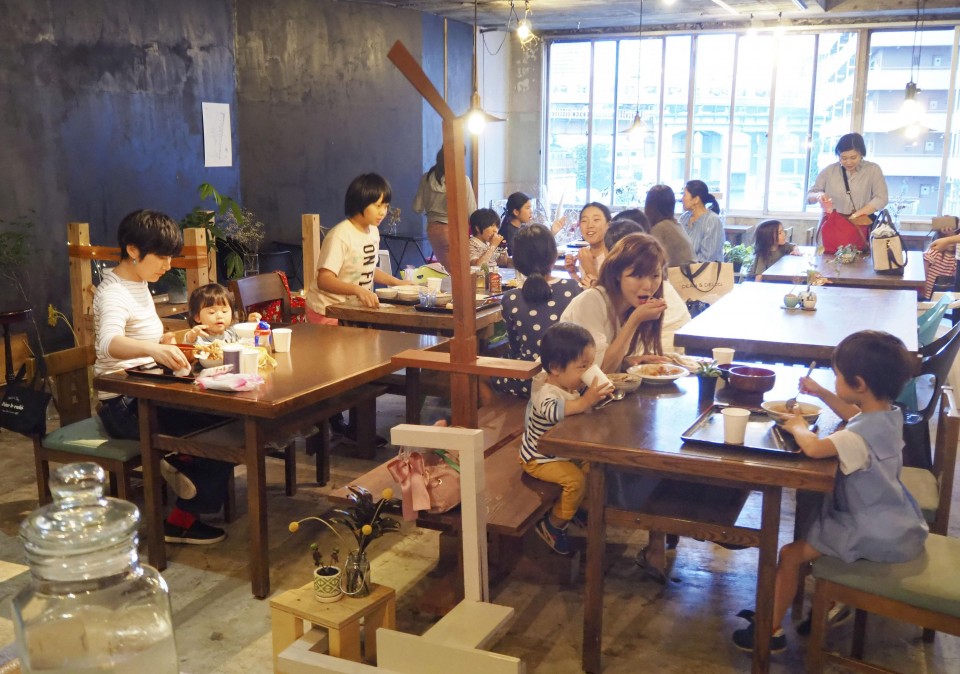 (File photo taken in 2019 shows children and families dine in a children cafeteria in Tokyo.)

Ever prepared, Momma foresaw the situation. "Early on, I thought about what would happen to us should we face a similar situation as in the lockdown in Wuhan," she said, referring to the Chinese city considered the original epicenter of that nation's outbreak.

That changed, though, when in early April a state of emergency was declared initially in certain areas including Tokyo, and later expanded to the entire nation.

The scheme, offering food items for free, serves as a grocery service for struggling families.

To keep the children who are regulars at the Sendai Kodomo Shokudo connected, they also came up with a unique pen pal-like project, in which blank postcards are sent to 50 children so they can write down their thoughts. 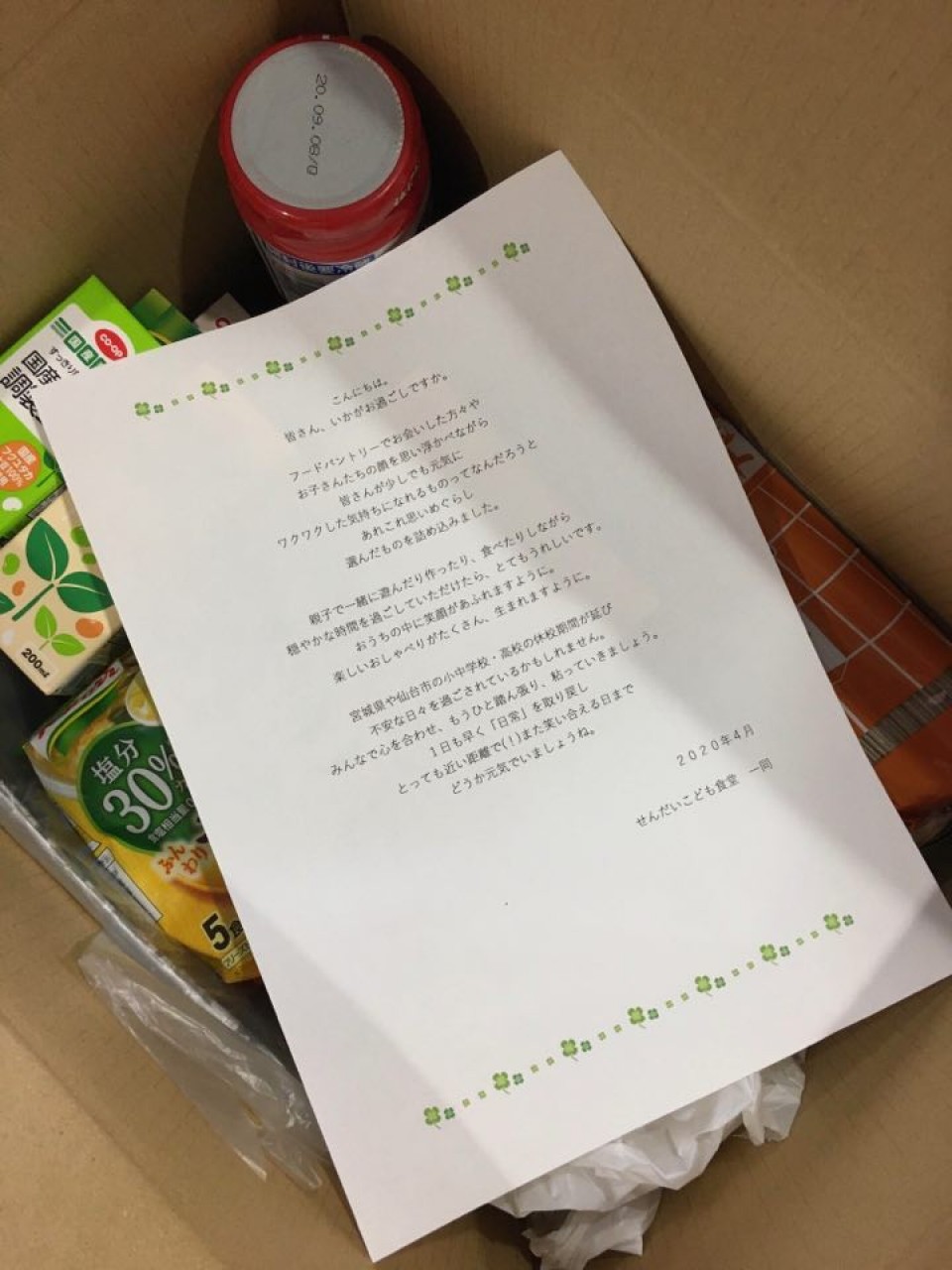 "I want the children to feel that they are not alone, that things won't stay the way they are now, and that someday, we will meet again," she said, adding messages they receive in support of their efforts give a much needed emotional boost.

"We felt it risky to gather children in a small space," group head Shinji Rokugo said. Usually, about 30 diners come in per day, but for now they have shifted to distributing "obento" lunch boxes for takeaway.

The two cafeterias reflect the dilemma faced by other cafeterias across the country during the pandemic, the total of which has now mushroomed into around 4,000 since the first opened in 2012.

Initially, the cafeterias were opened to serve low-income households and children who would eat alone because their parents had to work late, but over the subsequent years they have evolved to become a place for local community exchanges.

A survey by a nonprofit organization Japan Kodomo Shokudo Support Center Musubie, conducted in mid-April among about 230 groups in 35 prefectures, showed that nearly 40 percent of the cafeterias had halted operations entirely.

The vast majority of the remainder continued in different forms, some as food pantries others distributing boxed lunches or parcels.

The survey also found that some services had received complaints from local residents who said they are violating social distancing recommendations. 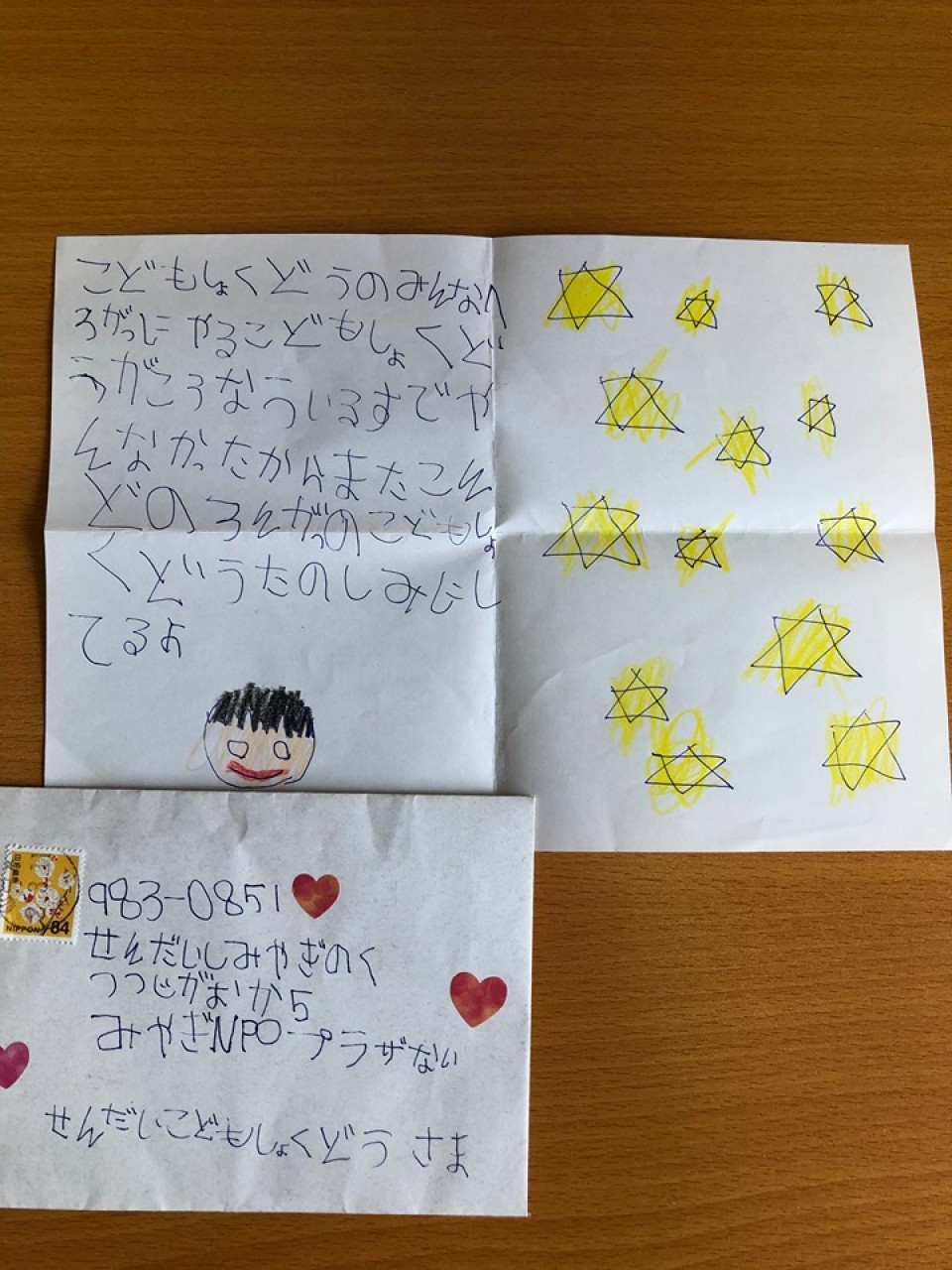 "An understanding of why children's cafeterias exist is still lacking in society. For those who need it, the children's cafeteria and food pantries are just as essential a service as that of day care centers and grocery stores," said Makoto Yuasa, president and CEO of Musubie.

Yuasa stressed that volunteers know very well the risk of infection, but they "still carry on because the necessity to provide such services supersedes the risks."

Government data showed that in Japan in 2015 one in every seven children under 18 years of age were living in households that earned less than half the national median disposable income, putting them under the child poverty line.

Yuasa said just as the 2011 disaster in northeastern Japan prodded people to rethink their lifestyles, the same goes for the current crisis. "It is now a time to be keenly aware that the regular things in life are what we should be grateful for."

Momma's group, which includes volunteers who want to repay society for the support they received during the trying times in 2011, is one of seven to receive COVID-19 emergency funding from the Fish Family Foundation, a Boston-based NPO behind the establishment of the Japanese Women's Leadership Initiative program.

Founder Atsuko Toko Fish hopes their support will be "a beacon of hope" for the women working directly with the most vulnerable during the pandemic and their communities. 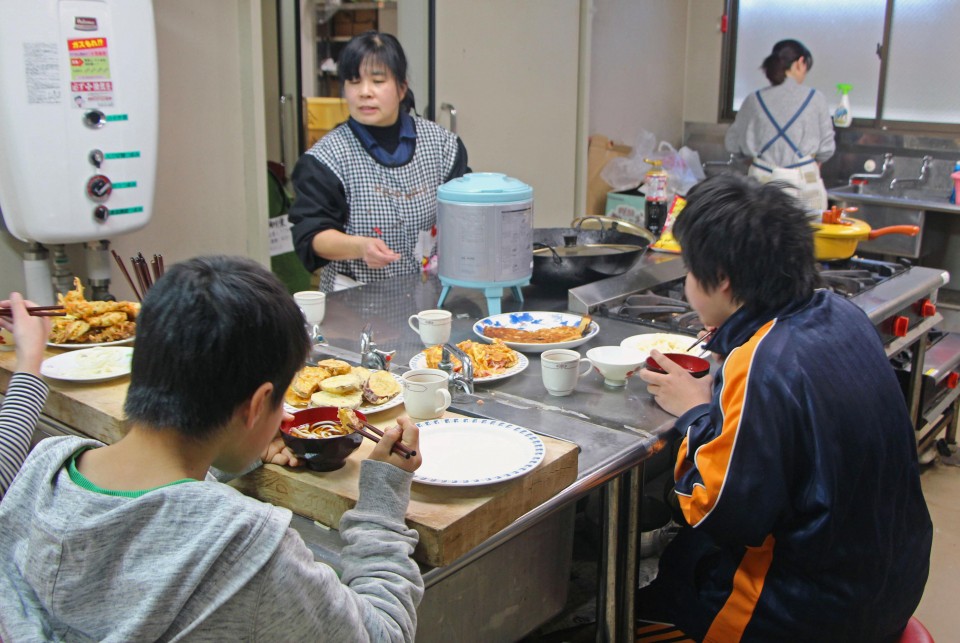 (File photo taken in 2018 of a children cafeteria in Sayama, Saitama Prefecture.)

While Abe has lifted the state of emergency for 39 of Japan's 47 prefectures including Miyagi, one of the worst-hit during the 2011 quake-tsunami disaster, people have been asked to continue social distancing.

For Yuasa, he sees a need to explore new frontiers, given that such cafeterias are not only a "lifeline" for some households but also a vital place to build community.

"We hope to create a scheme in which the children's cafeteria will be the hub in a local area," he said.

The idea is for cafeterias to buy food from struggling eateries to help them weather the virus fallout and distribute it to children. Thus, by helping both local eateries and children, it can build a groundswell of support and trust within the local community.

As Momma imagines it might be August at the earliest before the cafeteria can provide service at a pre-COVID-19 level, her group will continue sending food parcels and conducting letter-writing through October.

"Eating together breaks down barriers for people to open up. The cafeteria caters not only to children but also provides comfort and encouragement to parents," Momma said. "It is not only about filling one's stomach but also one's heart."