FOCUS: Japan's initial goal of V-shaped recovery not on horizon

Japan could fall into an even deeper recession after its economy contracted at an annualized pace of 3.4 percent in the January-March period, and a V-shaped recovery, much touted by the government, does not appear to be on the horizon.

The quarter marked the second consecutive decline, following a 7.3 percent plunge in the October-December period, meaning the world's third-largest economy had fallen, by some standards, into a technical recession even before Prime Minister Shinzo Abe declared a nationwide state of emergency over the coronavirus pandemic.

Many analysts predict that a dramatic economic rebound will not likely occur even if the health crisis eases.

"I'll lead the Japanese economy toward a V-shaped recovery at a stretch, once social anxieties are dispelled," Abe said at a press conference on March 28 after he instructed officials to draw up a package of measures to assist people and companies affected by the spread of the virus. 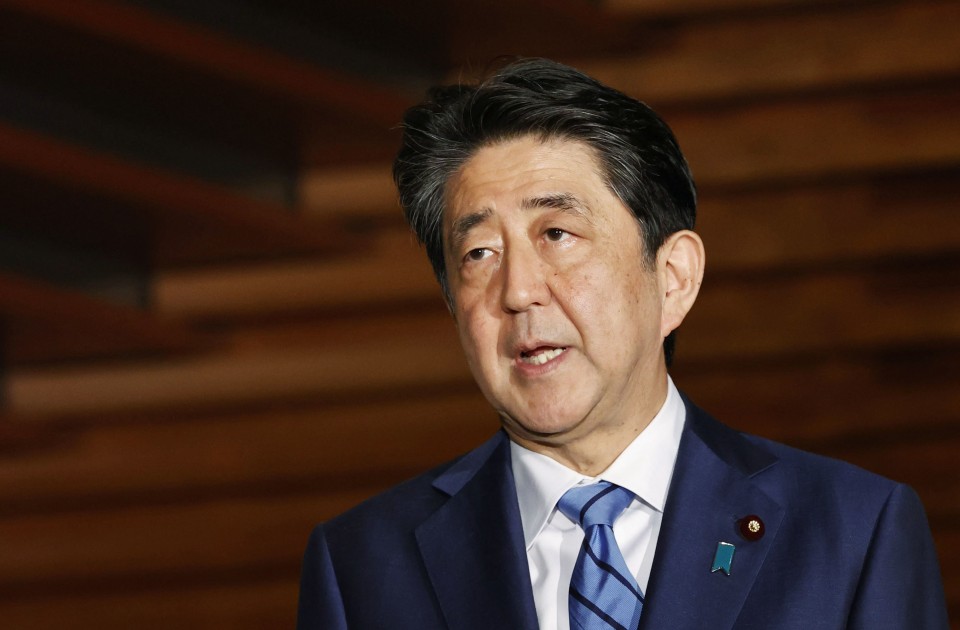 (Japanese Prime Minister Shinzo Abe speaks to reporters at his office in Tokyo on May 18, 2020, after giving up seeking passage of a controversial bill to raise the retirement age for prosecutors during the current parliamentary session.)

Abe and his Cabinet members, including Chief Cabinet Secretary Yoshihide Suga and Finance Minister Taro Aso, sounded more optimistic before, even though Japan had begun seeing a major virus outbreak in late February.

But, they seemed to have softened their tone, now no longer referring to a "V-shaped recovery."

As a matter of fact, Yasutoshi Nishimura, the minister in charge of economic and fiscal policy, asked businesses in Japanese prefectures where the state of emergency was lifted, to resume operations "in stages and carefully," when he met the press after the latest GDP figures were released.

Yasuhide Yajima, chief economist at think tank NLI Research Institute, said the road to immediate and full recovery of the Japanese economy is "extremely hard" given that "new ways of living" advised by the government, such as maintaining social distance, are expected to continue until the development of a COVID-19 vaccine.

Yajima said it is almost certain that various sectors of the economy, pressured by falling exports and private consumption, will face headwinds for more months, or even years.

The economy in the April-June period is likely to further worsen, with a recent survey by the Japan Center for Economic Research predicting that the annual rate of real GDP growth will shrink 21.33 percent from the previous quarter.

Abe declared a one-month state of emergency for seven urban areas, including Tokyo and Osaka, on April 7. He later expanded it to the rest of the country, under which people were asked to avoid nonessential outings, and some businesses, which require close person-to-person interactions, were requested to close temporarily.

The state of emergency was extended to May 31, but the government on Thursday lifted it in 39 of Japan's 47 prefectures amid a downward trend of new cases.

Still, the emergency remains in effect in the Tokyo metropolitan area, also encompassing Chiba, Kanagawa and Saitama, as well as Hokkaido, Kyoto, Osaka and Hyogo, where nearly half of Japan's population lives.

Residents in the 39 areas have also been told to refrain from crossing prefectural borders and holding large gatherings, and many businesses are finding it difficult to normalize their operations.

"The government had initially adopted a short, decisive battle strategy to achieve a V-shape recovery after containing the outbreak quickly, but is now under pressure to shift to a long-range strategy, to beat the unpredictably tough virus," Yajima said.

While projecting that the country's GDP will see annualized growth of some 10 percent in the July-September period, Yajima said, "That won't be enough if the figure would drop 20 percent" in the April-June quarter.

"It took more than two years for the Japanese economy to regain the original level after the global financial crisis (in 2008-2009), but this time the situation is more serious, and I guess it will take more time for the country to do so," he said.

Amid growing fears of a deep and prolonged recession, a drop in demand outside of Japan on the back of hard lockdowns in many major U.S. and European cities is also serious. 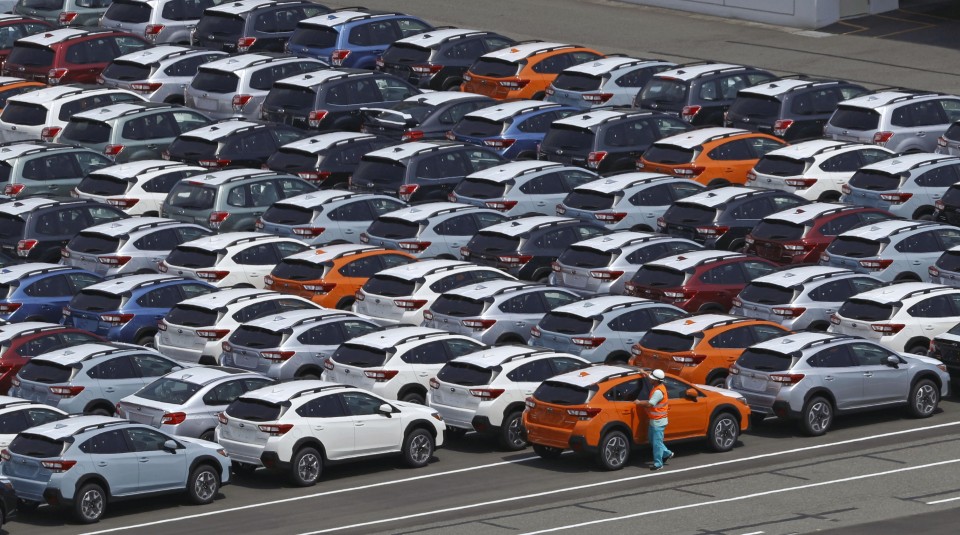 (Photo taken in August 2018 at Kawasaki port, near Tokyo, shows automobiles prior to export. Japan lowered its assessment of the economy on May 13, 2019, using the expression "worsening" for the first time in more than six years, amid slowing demand for exports of automobiles and manufacturing equipment.)

The auto industry, a key engine of the Japanese economy, has suffered from a sharp fall in exports.

In March, the nation's auto exports dropped 13.1 percent from a year earlier, and those of car components decreased 17.9 percent, according to data from the Finance Ministry.

Before the outbreak of the new coronavirus, the government had said Japan was likely to have experienced its longest economic expansion in the postwar period since Abe retook office in December 2012. But now Abe says the Japanese economy faces its biggest crisis since World War II.

The combined net profit of companies listed on the Tokyo Stock Exchange's First Section sank 66.8 percent in the January-March period from a year earlier, according to data from SMBC Nikko Securities Inc.

The unemployment rate is still relatively low in Japan, standing at 2.5 percent in March. But it could be much higher as the deteriorating economy will likely further dampen consumer spending.

Takahide Kiuchi, executive economist at the Nomura Research Institute, warned that the rate would be possible to rise to nearly 7 percent in the worst case, more severe than in the aftermath of the global financial crisis.

"In the crisis, export-oriented major companies were most negatively affected, but this time the hardest-hit ones are domestic demand-based, small and midsize firms," Kiuchi said.

"They don't have enough money to maintain their employment compared to big businesses, so workers at such firms might lose their jobs," he said.