The end of Japan's state of emergency over the coronavirus crisis has sparked hopes among the country's citizens living in Beijing that their families and colleagues may be able to return to the Chinese capital in the not-so-distant future.

Japanese people working in Beijing, some of who have been stranded in their home nation since China began to restrict the entry of foreigners in March, have also welcomed Prime Minister Shinzo Abe's decision, as it would encourage Beijing to ease the measure. 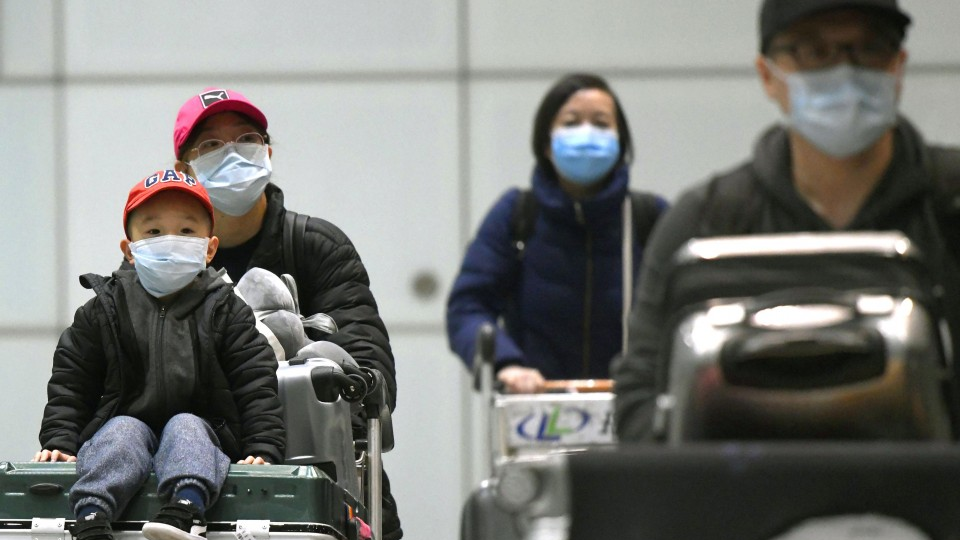 People wearing masks are seen at Beijing's international airport on March 11, 2020, amid the spread of the new coronavirus. (Kyodo)

"I've believed that if the number of infections in Tokyo decreases and the state of emergency is lifted, China will review the travel ban," said a 45-year-old male employee at a Japanese government-backed organization in Beijing.

"I've always closely watched the news about the situation in Tokyo. Now, I'm very happy as I feel the day I can meet my family and friends is just around the corner," he said, adding, "I'm still concerned over a second wave of infections though."

His wife and son, as well as many of his colleagues, went back to Japan for the weeklong Lunar New Year holidays that started Jan. 24 and extended their stay for "evaluation" as fears about the outbreak lingered in China in February.

In March, however, the virus sharply spread in Tokyo while the number of new infections continued to fall in China. In an attempt to contain imported cases, Beijing authorities began to require a 14-day quarantine for anyone entering from Japan.

"I wanted my family members to come back to Beijing as soon as possible, but I didn't want them to be stuck in quarantine in a different country. Worrying about this and that, they became unable to return to China," he added.

In late March, the Chinese Foreign Ministry abruptly announced that it would temporarily not allow foreigners to enter the nation. The step has applied even to those who hold a valid visa or residence permit.

An official of the Japanese Embassy in Beijing said most of the country's companies in China have resumed their operations, with preventive measures against the virus less stringent than before.

But at least 20 percent of Japanese people who were working in the Chinese capital have yet to come back, a survey conducted in late March by the Japanese Association in Beijing showed.

Given that almost all of the employees there returned their families to their home nation earlier this year, more are estimated to remain in Japan, the embassy official said. Currently, nearly 8,000 Japanese have reportedly registered to live in Beijing.

During the past few months, people's lives have got back to normal in the Chinese city, while local governments in Japan asked residents to refrain from nonessential outings and urged restaurants, bars and recreational facilities to suspend business.

In Japan, the coronavirus emergency declaration was first enforced in Tokyo, Osaka and five other urban areas on April 7.

After it was expanded to all 47 prefectures in mid-April and extended until May 31, Abe on May 14 exempted 39 prefectures, where the epidemic of the virus had been brought under control, followed by Osaka, Kyoto and Hyogo in western Japan last Thursday.

On Monday, Japan formally decided to lift the state of emergency in Tokyo and four other prefectures ahead of schedule, saying the number of virus cases has declined and medical systems have improved.

In Beijing, meanwhile, the delayed annual session of the National People's Congress, China's parliament that was originally convened on March 5, kicked off Friday. Speculation is mounting that the Communist-led government may relax a part of travel restrictions.

"Prime Minister Abe terminated the state of emergency at a very good timing. We can finally make preparations to return to Beijing," said a worker at a major Japanese electronics firm, who has stayed in Tokyo for more than four months.

China has already started to enable the entry of South Korean businesspeople meeting certain conditions to ensure a smooth supply chain, which has been seriously disrupted in the aftermath of the outbreak of the virus that causes the respiratory disease COVID-19.

Beijing has sounded out Tokyo on partially easing the travel ban so that Japanese citizens engaged in specific activities, who test negative for the new virus, can come and go between the two countries, a source familiar with bilateral ties said.

"Japan-China relations have been moving toward a positive direction. I strongly hope I can return to Beijing with my family in the near future," the electronics worker said.

Nevertheless, a 55-year-old male employee at a Japanese trading house in Beijing voiced wariness about the possibility of a second wave of infections, saying, "People in Tokyo appear to be dropping their guard against the virus according to news reports."

"I think there are asymptomatic patients in Tokyo, but TV footage is showing many people going outside, some of who do not wear protective face masks," he said.

"If the state of emergency is issued in Tokyo again, China would put off lifting the entry ban of Japanese citizens. I want to meet my family and friends soon, so I would like Japanese people to remain vigilant against the virus and make every effort to curb infections."

Japan has so far avoided an explosive surge of virus infections with more than 17,200 cases and around 850 deaths reported across the nation. The tally includes about 700 infections from the Diamond Princess cruise ship that was quarantined off Yokohama in February.

In China, the increase in infections peaked in late February. The virus, first detected in the central Chinese city of Wuhan late last year, has sickened nearly 83,000 people in the mainland and killed over 4,600, the country's health authorities said.