Local governments in Japan are waking up to the need to prepare for a worst-case scenario -- a natural disaster and a coronavirus outbreak hitting their areas at the same time.

Despite the end of a state of emergency over the virus outbreak that Prime Minister Shinzo Abe declared for the entire nation at one point, infections have not gone down to zero and the country is on alert about a resurgence in cases after some cities saw clusters of infections in recent days. 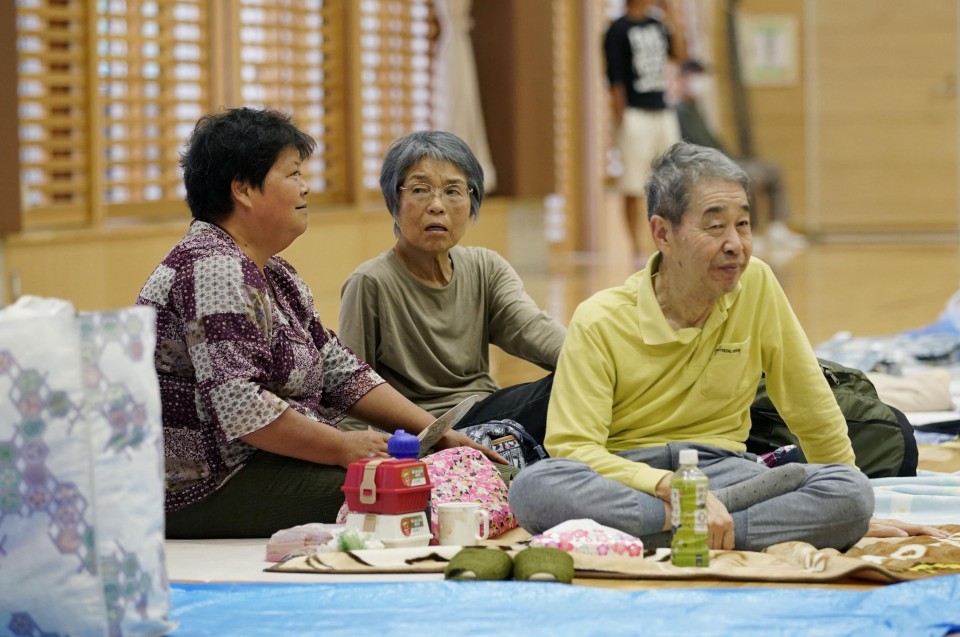 People in an evacuation shelter in Tateyama, Chiba Prefecture, on Oct. 11, 2019, await the arrival of Typhoon Hagibis. (Kyodo)

Japan is prone to natural disasters such as earthquakes and typhoons, and local municipalities have response plans. But this year, they are scrambling to prevent emergency shelters from becoming a hotbed for coronavirus infections as the arrival of the rainy season is expected for most of the country in June.

The northeastern Japan city of Kesennuma, Miyagi Prefecture, has decided to increase the number of schools and community centers that will provide shelter mainly to elderly residents who begin evacuating earlier than others in cases of disasters such as flooding, from the current 12 to 25.

Kesennuma has a total of 96 facilities ready to serve as emergency shelters in the aftermath of disasters including an earthquake or tsunami.

The plan is aimed at avoiding the overcrowding of emergency facilities by dispersing evacuees and lowering virus transmission risks as Japan is calling for avoiding the "three Cs" -- confined and crowded places and close contact with others.

People in shelters need to keep a distance of 2 meters and use disinfectants, according to the city's operational guidelines.

But a city official acknowledges that help from outside entities such as local residents' associations may be necessary to run the facilities. "City government officials may not be enough," the official said.

The northeastern Japan region was ravaged by the major earthquake and tsunami in 2011 that triggered in Fukushima Prefecture the worst nuclear accident since Chernobyl.

Medical experts are calling for continued vigilance against the pneumonia-causing virus although Abe declared the state of emergency was over for now last Monday. 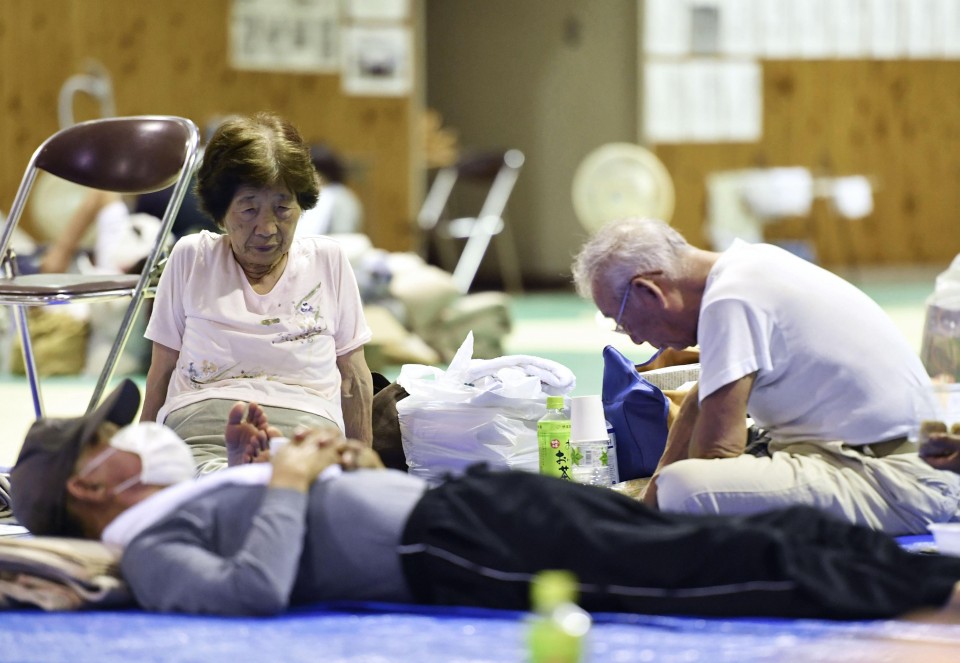 People are exhausted at a shelter in Asakura, Fukuoka Prefecture. The death toll from flooding and mudslides caused by torrential rain on Japan's southwestern main island of Kyushu rose to 12, as heavy rain continued in parts of the region damaging houses and roads. (Kyodo)

The case total in Japan has still been increasing, although at a much slower pace than before, with the count standing at around 17,500, including about 700 from the Diamond Princess cruise ship that was quarantined off Yokohama in February.

Every year, Japan is hit by dozens of strong earthquakes, and a couple of powerful typhoons have wreaked havoc on parts of the country every summer and fall in recent years.

If the need arises to seek shelter, evacuees will be encouraged to bring their own face masks, soap and thermometers.

The city of Amagasaki in Hyogo Prefecture, western Japan, plans to prepare shelters that will exclusively accept people who were in close contact with those found to have been infected with the virus or returnees from overseas.

But going to evacuation facilities arranged by local authorities is not the only option as long as there are other safe places. Hotels and Japanese-style inns can also play such a role, the central government says.

As the availability of rooms fluctuates day by day, the use of hotels may not be so easy. "It's difficult to craft plans on the use of hotels in advance," said an official of the city government of Nagano, central Japan, which was hit by Typhoon Hagibis last October.

The city plans to make arrangements with hotels when a disaster occurs.

The number of hotel stayers is expected to increase as government requests to refrain from crossing prefectural borders to reduce the risk of the coronavirus spreading will be gradually eased following the end of the state of emergency.