Hong Kong legislators scuffle over right to preside over committee

A scuffle broke out in Hong Kong's legislature Friday as lawmakers sparred over the right to elect a new-term committee chair, a process which has dragged on for months and drawn the dismay of the Chinese government.

In an afternoon meeting at the Legislative Council, the house committee's erstwhile chairwoman Starry Lee, from the pro-establishment camp, seized control of it from pro-democracy camp lawmaker Dennis Kwok, the incumbent vice chairman who had been acting as its presiding chair since last October.

Lawmakers from the pro-establishment camp, with the help of security guards, managed to keep the pro-democracy camp lawmakers away from Lee as she commenced the meeting.

Kwok had assumed the presiding role after Lee relinquished her chairwomanship of the committee last October in order to stand in the election for a new term. 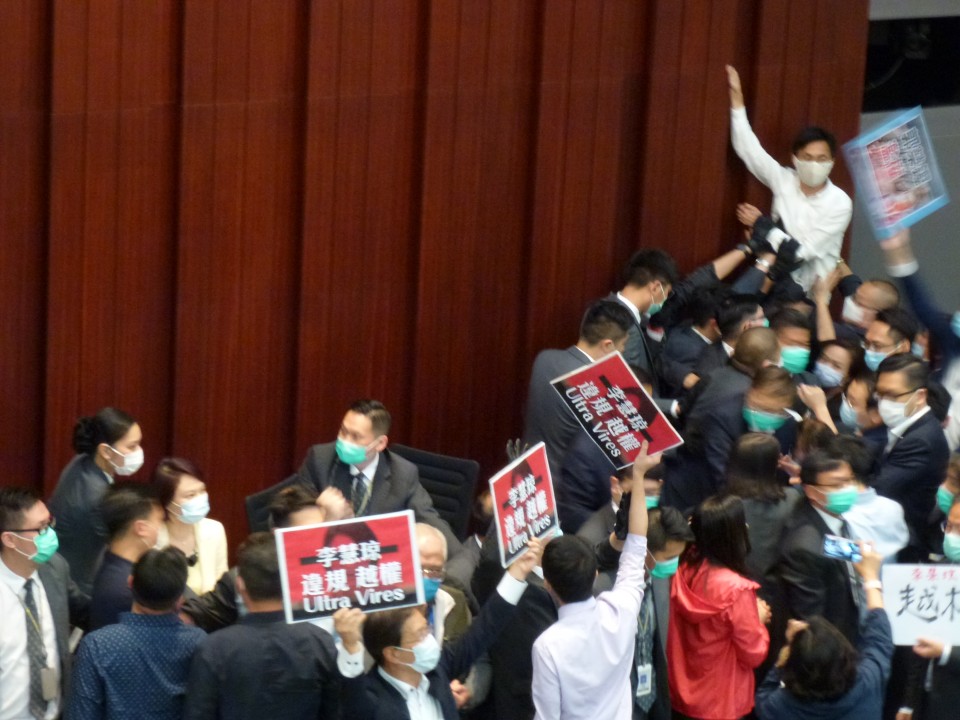 Different legal advices on the issue were sought by both sides, but they failed to come to a solution.

"Starry Lee, shame on you!" the pro-democracy camp lawmakers in the conference room kept chanting to disrupt the meeting.

The council's Secretariat said Lee may resume the chairmanship under "extraordinary circumstances" to solve unforeseeable matters, such as the failure to choose a new chairman within a reasonable time.

"Starry Lee has no right to host this illegal meeting. Give the presiding chair back to Dennis Kwok," Charles Mok of the pro-democracy camp said in the meeting.

Kwok, who had presided over a dozen meetings including Friday morning's session, accused Lee and her colleagues of hijacking the meeting.

"The power to preside over the meeting was rudely and without justification taken away from the proper interpretation of the rules of procedure, which is that the first order of business must be the election of the house chairman," Kwok told reporters after the pro-democracy camp lawmakers staged a mass walkout.

"(Lee) has no power to preside over the meeting. It is wrong. It is illegitimate. It is in breach of the rules of procedure," he said.

The election of the committee chair and vice chair was to take place last October, but related meetings dragged on with no end in sight.

The Chinese central government has criticized the filibustering and accused Kwok of public misconduct and breaching his oath of office for filibustering.

Hong Kong leader Carrie Lam has said the National Anthem bill, among others, will be first scrutinized once the house committee resumes normal operation.