With Japan's bars and restaurants largely empty of revelers during the coronavirus pandemic, craft beer consumption dried up and left owners needing a near-miracle to stop them from having to pour their valuable stocks down the drain.

That was when a long-established microbrewery northeast of Tokyo came to a Jesus-like water-into-wine rescue, in this case discovering a technique to turn soon-to-expire craft beer into gin.

Due to craft beer's relatively short shelf life, the brewery's revelation meant beer that had been sitting in bar and restaurant kegs for almost too long could be converted into long-life gin.

It also positioned the businesses well for when they are able to quench their customers' thirsts upon the return of normal life.

Kiuchi collects the craft beer in kegs from liquor shops, bars and restaurants and puts it through the required two-stage distillation process before converting it into gin. After bottling for distribution, the products are returned, with the business owners only required to pay for delivery.

As of May 21, the company had collected 14,000 liters of beer across 16 prefectures, including Tokyo, Osaka, and Hokkaido which were among Japan's hardest hit by the virus outbreak.

Craft beers get their distinctive tastes and aromas from the hops, malt and yeast strains used in the brewing process. They generally stay fresh for up to three months before beginning to spoil.

Made with meticulous attention to detail and a focus on flavor and quality, craft beers are produced at small-scale independent local breweries.

For Kiuchi Brewery employee Takashi Torii, 27, it was a matter of answering the industry's cry for help, with the businesses already financially strapped by closures and facing the further blow of their beer stocks going to waste. 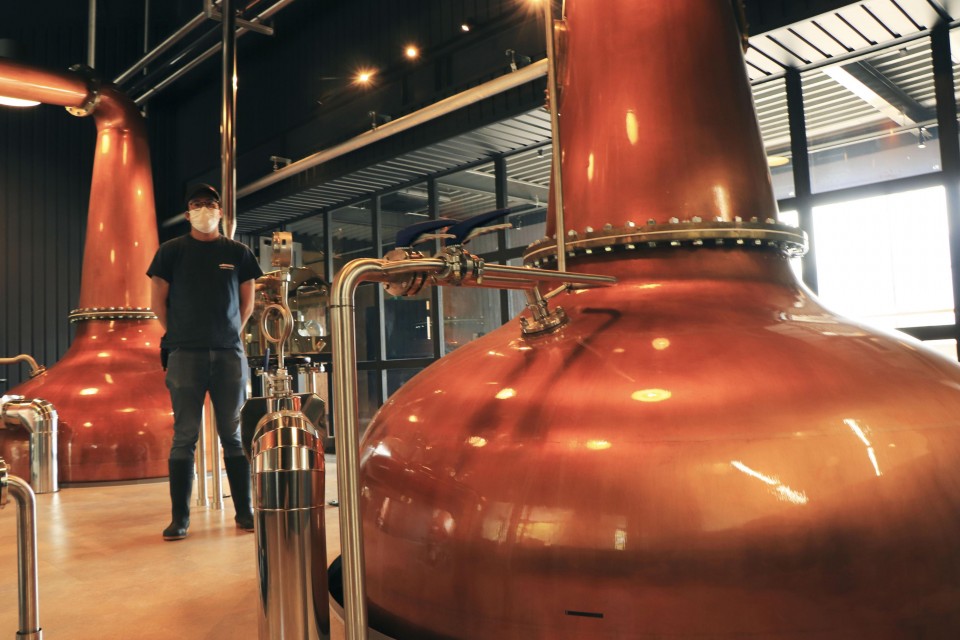 "It was unbearable for me to think about the beer that had been made with our heart and soul being poured down the drain," said Torii, explaining why he took on the enterprise.

Since gin is distilled like other spirits, such as vodka and whiskey, it has no expiry date.

Kiuchi discovered that its processes and technology could be applied to the gin-making process as they are similar to those it uses to make plum wine from distilled beer.

The company believed it could bring a whole new twist to enjoying the flavor of gin because it could add the distinctive aroma delivered by the beers' hops, malt, and yeast.

To raise capital, the company utilized Japan's liquor tax law, which allows it to get a refund from the government of 220 yen per liter of beer brought in to generate funds for distillation, bottles, and labels.

With the amendment of the law in 1994, small-scale production of beer increased across Japan, and the number of microbrewery production licenses, just six at that time, exploded to 395 at the end of March 2019, based on data from the National Tax Agency.

The Sendai-based Tohoku Cafe & Bar Tregion handles craft beers from all over the Tohoku region. It sent 120 liters of its products to Kiuchi Brewery and after a business suspension during the state of emergency, the restaurant reopened, albeit over shorter business hours, from May 11.

"If you think about the feelings of the producers, we are glad this beer did not go to waste. We want our customers to enjoy this even though it is in a different form from the original," said Kazuya Hashimoto, 35, one of the cafe staff.

Witch Craft Market, a liquor shop in the town of Ozu in Kumamoto Prefecture, southwestern Japan, entrusted Kiuchi Brewery with 70 liters of its craft beer that was nearly thrown away.

"At a time when everyone is struggling, we are grateful for this free service," said the shop's owner Akiko Tanoue, 37.

"Compared with craft beer, which has a high unit price, gin can be used in a wide range of shops," she added, reflecting on the hoped-for demand boom that may eventuate when people can return to their favorite watering holes.