All but two of the 99 people who were on the Pakistani passenger jet that crashed Friday in a residential area of the southern port city of Karachi perished in the disaster, the local provincial authority said in a report Saturday.

The Health Department of Sindh Province said in the report that four people on the ground were injured in the crash landing of the Airbus A320 operated by Pakistan International Airlines.

Three of the four suffered burn injuries to at least 30 percent of their bodies, according to the document, which said three children were among the deceased passengers. 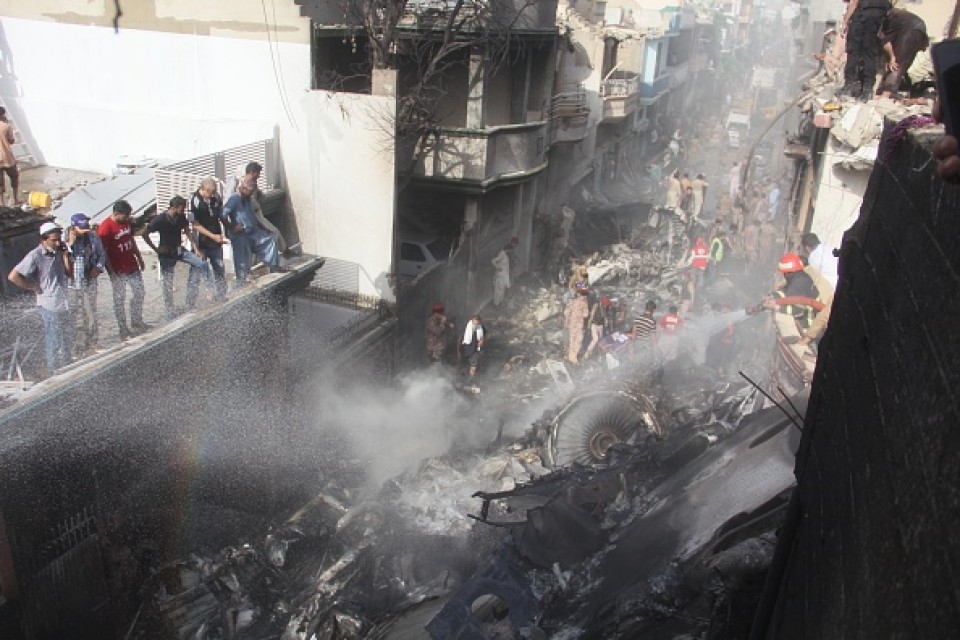 (Wreckage of a passenger plane crash in a residential area near an airport in Karachi, Pakistan on May 22, 2020)[Anadolu Agency/Getty/Kyodo]

Military spokesman Maj. Gen. Babar Iftikhar said a total of 25 houses in the densely populated neighborhood were damaged in the crash, which happened around 2:30 p.m. Friday while the aircraft was making a second attempt to land at Karachi's Jinnah International Airport.

"The 25 affected houses have been cleared and their residents have been accommodated at various places," the spokesman said.

The two passengers who miraculously survived the crash have been identified as Zafar Masud, president of the Bank of Punjab, and Khalid Sherdil, a corporate chief executive. Both men were reportedly sitting in the front row of the plane.

Army troops were involved in the grisly operation of recovering bodies from the rubble of the damaged buildings and debris from the ill-fated aircraft.

Twenty-one bodies have been identified and handed over to their relatives. The rest are being identified through DNA tests, a spokesman for the airline said.

Most of the 91 passengers on board flight PK-8303 were travelling to Karachi to celebrate the upcoming Islamic festival of Eid-al-Fitr, which marks the end of the holy month of Ramadan.

According to details of the crash that have emerged so far, the aircraft developed a fault of some kind during the first attempt by the pilot, Sajjad Gul, to land at the airport, forcing him to go around.

"The pilot reported that he was ready for landing. He was given clearance for landing by the control tower, but he went for a go-around," Arshad Malik, chief of the state-run airline, told journalists late Friday.

The reason Gul decided to go around rather than land would be established through an analysis of the plane's voice and flight-data recorders, he added.

Qasim Hayat, a retired top executive of PIA and a former pilot, told Kyodo News that, in the audio recording of the pilot's conversation with the control tower, a cockpit alarm could be heard when the pilot, during his first attempt to land, told the tower that he would go around.

The alarm, Hayat said, indicates that some mechanical, hydraulic or electrical failure occurred during the first attempt.

Gul reported an engine failure in his second landing attempt and indicated that he would have to go for a belly landing.

Moments before the crash, Gul issued a mayday distress call.

Imran Narejo, an official of the PIA Pilots Association, said Gul was a seasoned pilot with 18,000 hours of experience including over 4,000 hours in the A320.