The Bank of Japan decided Friday to provide a further 30 trillion yen ($278 billion) to broaden support for corporate financing until the end of March 2021, targeting small and midsize companies hit by the coronavirus pandemic.

At its first unscheduled meeting since November 2011, the central bank decided to start providing the funds to financial institutions such as regional banks in June in a bid to prod them to increase loans to smaller companies and individual business operators.

The latest step will expand the size of the BOJ's support for corporate financing amid the pandemic to 75 trillion yen.

"Even if the situation of infections in Japan subsides steadily, if cases remain in the world, we cannot expect demand for exports and expenditures by foreign tourists. There is a possibility that the economy will not necessarily recover in a V-shape for various reasons," BOJ Governor Haruhiko Kuroda said at a joint press conference with Finance Minister Taro Aso.

Kuroda and Aso met after the BOJ's policy board meeting, issuing a rare joint statement that said the government and the bank will do "whatever it takes" to address economic impact from the pandemic.

The BOJ is ready to "take further monetary easing steps (to underpin the economy) when necessary," Kuroda said at the press conference. 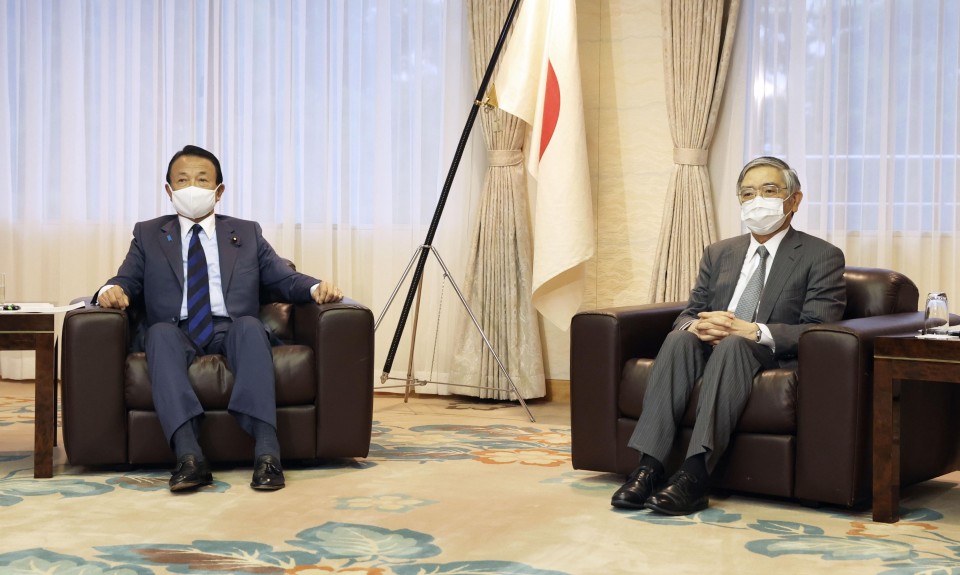 Japanese Finance Minister Taro Aso (L) and Bank of Japan Governor Haruhiko Kuroda hold a meeting in Tokyo on May 22, 2020, to discuss measures to mitigate the economic fallout from the coronavirus pandemic. (Kyodo) ==Kyodo

The new 30 trillion yen scheme comes after the BOJ in late April introduced a 25 trillion yen loan program mainly aimed at helping large companies and raised the ceiling for purchases of corporate bonds and commercial paper by the central bank to up to 20 trillion yen.

To encourage lenders, the central bank will pay 0.1 percent interest on the loans made to small and midsize companies while pledging to extend the purchase period of corporate bonds and commercial paper until the end of March from the initial plan through late September.

The government decided last month to introduce a fresh scheme to provide loans to small and midsize companies without interest and collateral via financial institutions as part of an economic stimulus package to rescue businesses suffering from loss of financing amid the spread of the coronavirus.

Kuroda instructed his officials at a policy meeting on April 27 to swiftly consider the new measure to financially back the government's new policy.

On Thursday, the government decided to keep the Tokyo metropolitan area and Hokkaido under a state of emergency declared over the pandemic, asking people to stay at home as much as possible, while lifting it in Osaka, Kyoto and Hyogo prefectures in western Japan.

The metropolitan area covers Tokyo and neighboring Chiba, Kanagawa and Saitama prefectures. Japan had already removed stay-at-home requests in its 39 other prefectures.

"The Bank will continue to support financing mainly of firms and to maintain stability in financial markets," the BOJ said in a statement, adding it "will not hesitate to take additional easing measures if necessary."

The BOJ's last unscheduled meeting in 2011 was held to discuss responses to the sovereign debt crisis in Europe.

The central bank is scheduled to hold its next regular two-day policy meeting from June 15.